Understanding The Hart-Celler Immigration And Nationality Act Of 1965 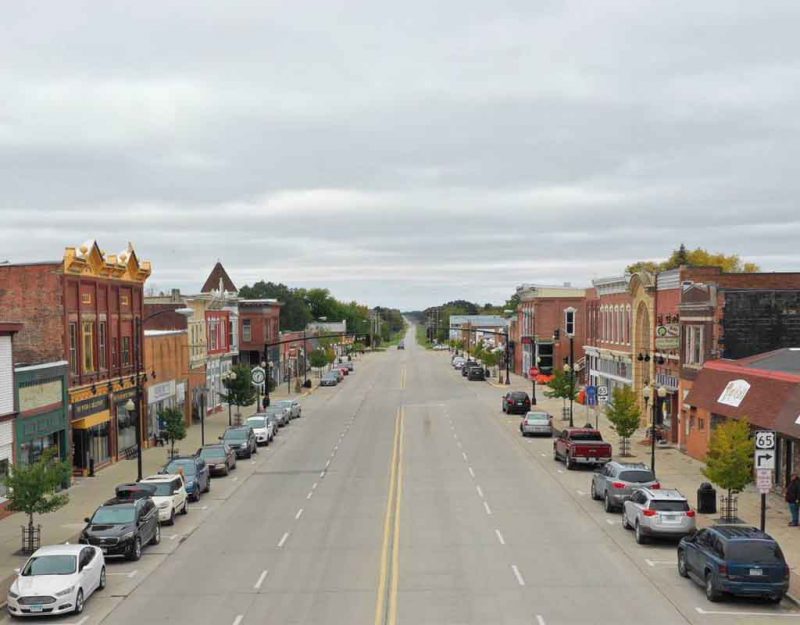 Europeans and Americans find themselves adjusting to the idea of demographic replacement, a Leftist attempt to achieve a permanent one-party majority that uses an ancient method of dominating an electorate that was not Leftist enough.

It shows that they are chess-players, thinking in terms of the rules of a game several steps ahead, but not realists. Realists recognize that chess is a game, and that schemers often win the game, but then lose out in reality, mainly because their careful schemes implode when applied in reality.

Leftists began their attempt to replace the founding populations of Europe and America in the 1960s. In the United States, the Immigration and Nationality Act of 1965 (also known as the “Hart-Celler Act” for its two congressional sponsors) took the lead by changing American immigration quotas to favor the third world:

“This bill that we will sign today is not a revolutionary bill,” the president said. “It does not affect the lives of millions. It will not reshape the structure of our daily lives. … Yet it is still one of the most important acts of this Congress and of this administration. For it does repair a very deep and painful flaw in the fabric of American justice. It corrects a cruel and enduring wrong in the conduct of the American nation.”

The wrong that Johnson and Congress sought to correct was codified in legislation passed 41 years earlier, during a post-war era fraught with anxiety about mass immigration, the shadow of European radicalism, and theories of racial superiority.

The 1924 law established a quota system based on national origins. It directed nearly 70 percent of the immigration slots to northern Europeans, cutting back drastically on immigration from southern and eastern Europe. It maintained formidable barriers against immigration from Asia and Africa, while leaving immigration from the Western Hemisphere unrestricted — a gesture of hemispheric solidarity that also served the cheap-labor interests of American employers.

By 1980, most immigrants were coming from Latin America, Asia, and Africa — in numbers far greater than the annual average of 300,000 that had prevailed during the 1960s. Despite assurances by Hart-Celler advocates that the bill would add little to the immigrant stream, more than seven million newcomers entered the country legally during the 1980s. That trend has continued. Meanwhile, illegal immigration also began a decades-long surge.

In the eyes of its creators and advocates, notably Ted Kennedy, the act was designed as an extension of the Civil Rights Act of 1964. It hoped to end discrimination immigration as had been done in the years since WW2, when America realized that equality had won over hierarchy in that war as the one before it, and in order to maintain ideological consistency, America had to become diverse like pre-war Germany, but with our own wrinkle based on already having Africans and Asians (Amerinds) here.

This new zeal for equality helped distance America from both Hitler and the Soviets, who had created a society designed around obedience. Fusing the American myth of “rugged individualism” with the idea that we were a “nation of immigrants,” the Hart-Celler Act made immigration equal:

After World War II, opponents of the racially discriminatory national origins system spent twenty years working to dismantle the quotas, and the Hart-Celler Act was the product of these struggles. In doing away with national origins, and in replacing it with a system that was on its face race-neutral, the 1965 act can be seen as part of the civil rights moment in which it was passed, coming just one year after the Civil Rights Act of 1964, and in the same year as the Voting Rights Act.

Although in signing the act into law, President LBJ stated that it was “not a revolutionary bill,” Hart-Celler opened the doors to immigrants from around the world, ending the heavy emphasis on European immigrants that marked the earlier immigration system. To give one example, the number of immigrants gaining permanent visas from Asia in the 1970s was ten times as many as those in the 1950s. This represented a really remarkable change: while we have always been a nation of immigrants, and a nation of immigrants from around the world, the act helped to make us a far more multicultural nation.

In this way, the act was consistent with our experiment in ethnic diversity caused by the need, starting in the 1820s, to import Irish labor as our own grew more expensive. This early diversity program divided the country and made it shift Leftward, and Leftists knew that the Hart-Celler Act would do the same thing, except on a bigger scale.

America never really dealt with the issue of race very well. Our first colonists encountered Indians, then the Indians attacked, kicking off two centuries of warfare. Disease killed most of the Indians; the rest got settled in isolated communities.

For most Americans, Indians set the tone. The Other would stay in its communities, and come into town when they needed to buy something. They would work for us, sometimes, at low wages which were still a step up from their normal poverty.

If we needed to show our neighbors the Joneses how much more welcoming and giving we were, we could always bring a basket of sweet potatoes or corn to the Indians and the whole community would see us helping the helpless.

The same was assumed to be true of Africans. Once set free, the theory went, they would form their own communities. This would have worked except for the constant ethnic clashes, with Africans committing some highly dubious crimes and thus becoming sort of a symbol for crime.

As a result, white people became accustomed to blaming everything on the African. If a woman made an unwise sexual decision, she could cry rape, and a black man would hang. If you stole your own car for the insurance money, of course you blamed “two black guys” for it!

Even more, we set up Chinatowns for at first our Chinese labor but later our Irish and Italians, Greeks and Jews, Spaniards and Polish. We expected other races to follow the same model and for some time, they did, staying in their balkanized territories and speaking their own languages.

Only when the 1960s rolled around did the awakening start, and only in the 1990s did it pick up. We wanted to give them “a seat at the table.” We wanted to make right all those historical wrongs. Bill Clinton campaigned on white guilt and was elected to “improve race relations.”

Mexicans were familiar from our southern border, and many of them lived near us, but not among us. With the Reagan amnesty in 1987, and later the great Clinton push to bring in cheap labor and make NAFTA our future, suddenly America became awash in Mexicans.

In the middle of this, the Hart-Celler Act set about doing its dirty work: changing American demographics permanently, because minority groups have always voted Leftist, whether that was for progressive Republicans or socialist Democrats.

Hart-Celler transformed America in thirty-five short years, leaving it unrecognizable to the denizens of the Old America:

The civil rights movement’s focus on equal treatment regardless of race or nationality led many to view the quota system as backward and discriminatory. In particular, Greeks, Poles, Portuguese and Italians–of whom increasing numbers were seeking to enter the U.S.–claimed that the quota system discriminated against them in favor of Northern Europeans. President John F. Kennedy even took up the immigration reform cause, giving a speech in June 1963 calling the quota system “intolerable.”

In the first five years after the bill’s passage, immigration to the U.S. from Asian countries–especially those fleeing war-torn Southeast Asia (Vietnam, Cambodia)–would more than quadruple. (Under past immigration policies, Asian immigrants had been effectively barred from entry.) Other Cold War-era conflicts during the 1960s and 1970s saw millions of people fleeing poverty or the hardships of communist regimes in Cuba, Eastern Europe and elsewhere to seek their fortune on American shores. All told, in the three decades following passage of the Immigration and Naturalization Act of 1965, more than 18 million legal immigrants entered the United States, more than three times the number admitted over the preceding 30 years.

By the end of the 20th century, the policies put into effect by the Immigration Act of 1965 had greatly changed the face of the American population. Whereas in the 1950s, more than half of all immigrants were Europeans and just 6 percent were Asians, by the 1990s only 16 percent were Europeans and 31 percent were of Asian descent, while the percentages of Latino and African immigrants had also jumped significantly. Between 1965 and 2000, the highest number of immigrants (4.3 million) to the U.S. came from Mexico, in addition to some 1.4 million from the Philippines. Korea, the Dominican Republic, India, Cuba and Vietnam were also leading sources of immigrants, each sending between 700,000 and 800,000 over this period.

During the 1960s, America transitioned from government by realism to government by ideology. That is, we no longer cared what worked or did not, but aspired to what was symbolically correct, a form of utilitarianism that valued whatever act made most people feel good even if it failed.

In addition, people discovered a new industry in equality. Immigration lawyers, welfare administrators, diversity consultants, and civil rights mediators popped up like new grass during the 1990s and afterwards. By the time 9/11 happened, diversity fever had seized America.

This happened because of Hart-Celler, which did the opposite of what was promised:

Senator Ted Kennedy (D-MA), the bill’s floor manager, stated: “It will not upset the ethnic mix of our society.” Even advocacy groups who had favored the national-origins quotas became supporters, predicting little change to the profile of immigration streams.

By the time the 1990s rolled around, American politicians were elected by a swing vote of minorities. Several urban areas had gone minority-majority, following Detroit, and they found that once minorities started voting, they dominated, and voted themselves fat benefits at the expense of the dwindling white population.

This finally came to the forefront when Barack Obama won the election, since he found support from the same people who elected Bill Clinton plus the new horde of minorities who had found their political voice.

As with Clinton, people expected racial reconciliation. Finally, a black president! The nightmare must be over. Instead, the Obama years showed us that every group — religious, racial, cultural, ethnic — acted only in its own self-interest alone. Riots broke out regularly.

However, the balance had been shifted, and now, minority voting patterns favored the Left, leading to the election of Barack Obama with overwhelmingly minority support. This divide continues to the present day, showing why the Hart-Celler Act aimed at demographic replacement in the first place:

All of this reeks of deliberate strategy, introduced by a group of Irish, Italian, and Jewish immigrants who wanted to force acceptance of their groups by introducing enough foreign people to adulterate and disenfranchise the WASP remnant.