The red cup and pluralism 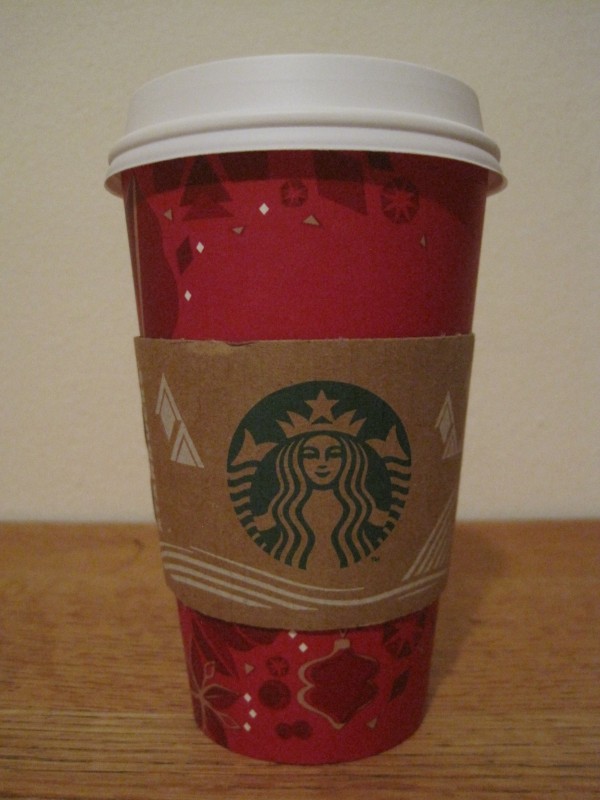 The sheer screaming ignorance of the debate on this topic has nearly forced me to write about it, as the pain of reading what has been written so far is too great.

Starbucks coffee company — a giant multinational that many Americans go to daily — changed its coffee cup. That is, the coffee cup it uses during the holiday season. The coffee cup that over the past five years has born Christmas ornaments, snowflakes, reindeer, and other Christmas imagery.

But now it’s as red as the Soviet Flag. And Christians are boycotting it. This has prompted many people to opine that the color of the cup doesn’t matter, or that people should simply go to another coffee joint, or that the cup was never a Christmas cup.

All of these miss the point entirely: a symbol was changed from that of a dominant culture to that of anti-culture.

If you expressed one of the above opinions, it is time to shut up. You are not ready for understanding any of the issues in this post or in this discussion. You should not vote, and probably not drive. You are, quite simply, inferior because your understanding is pathetic, really. Whether you agree or disagree, you just don’t understand the issues and have become the equivalent of a child screaming because it does not understand why it must go to school.

Pluralism is the idea that we do not pick an answer. Instead many answers co-exist at the same time.

In a pluralistic sense, Starbucks is offering a generic holiday cup instead of a Christmas one to acknowledge the diversity of religious opinion. This is the equivalent of saying “Happy Holidays!” instead of “Merry Christmas!”

On the other hand, in a pluralistic sense, the Christian boycott of Starbucks is a way of saying that a consumer audience exists who will reward Christian-friendly business. This is part of pluralism too; groups are free to cultivate around them others who agree with them, although liberals forget this and try to ban freedom of association in order to squelch it.

Starbucks and liberals want you to forget the second stage to pluralism: eventually, an answer is chosen, and the perpetual-pluralism of “I choose not to choose” creates an impetus for people to form groups around specific answers. This is part of natural selection, too. One group will win out.

Unlike many on the alt-right, I do not think this boycott is moronic. It is sending a clear signal, from consumer to business, that the consumer is interested in that business only if it supports that consumer’s values, including faith and culture.

Next year, Starbucks faces a difficult choice. If it puts out a non-Christmas holiday cup, the same thing will happen; if it puts out a Christmas holiday cup, it will be attacked by angry leftists, Muslims, #blacklivesmatter jobless protesters, Jews, Wiccans and people who hate reindeer. Its only options are to either scrap the cup altogether, or put out one for each group at great expense. Welcome to pluralism, Starbucks! — you can see why all successful groups grow up and leave it behind.

In the meantime, the other issue lurking in this debate is that Starbucks is a near-monopoly on drive-through coffee and local coffee shops. During the 1990s and 2000s, it grew like a yeast culture on a Petri dish and effectively drove out most alternatives. If you get coffee in the mornings, you are close to a Starbucks and the closed remnants of a once-great coffee shop. Starbucks has made itself a daily feature of our lives and, some say, it owes a debt of social responsibility — not to pity-projects, like far-off orphans, but to its actual audience — to uphold the values of that audience.

Either way, in our media you never hear mention of these topics. They know their audience is composed of mostly insincere persons who lack the intellectual and moral ability to understand one paragraph of the above. They also know there is more ad time to be sold in groups of idiots saying “I don’t get it, just paint the cup!” because they think it makes them look intelligent, than in people who are interested in ideas, history and practical solutions.

This is why your ancestors invented a system called feudalism. Most people are deficient in brains and moral character, barely above monkeys, and so while they can do a modern job just fine, they always choose destructive things. They cannot control their appetites, nor their need to look cool to their friends, nor do they have any particular ability to tell good from bad in quality. They like new things and leave a trail of landfill behind them.

Feudalism took such people and put them in peasant roles where they were kept illiterate so they could not argue or write nonsense, and kept impoverished so they did not generate a trail of disposable wreckage. These people have always been this way. They are inferior and their opinions are unnecessary. But they always think eternal pluralism is a good idea, and until now, Starbucks probably thought that was good for business.

Neoreaction is conservatism | To be right is to be rustled