The false nature of elites 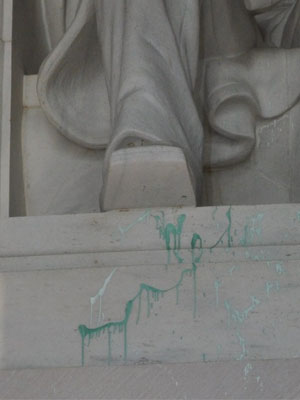 Symbolism occurs when a small part of some thing comes to represent the whole. We see a flag, and we think of a nation, even though the nation despite containing many flags does not resemble a flag, nor is solely made of flags.

When we are an undifferentiated mass like the commercial hordes of modern liberal democracy, we have no way to think of ourselves outside of political symbols. The crowd cannot be summarized because it has nothing in common but commerce and ideology.

As a result, we tend to look toward those that aggregate ideas. We like our politicians to seem to represent our “camp,” so we choose them by their more dramatic acts. We like media because we identify with the characters. And we pick social elites who seem to agree with us.

The trap here is that these people symbolize what we think we want, and not how we live or our actual interests. They are cheerleaders for a symbolic “statement” or stand made for the things we fear or desire, but outside of that, have nothing in common with us.

Thus people get promoted to the elites for supporting legal abortion, outspoken civil rights activity or even simply being funny or witty. We know nothing else about them.

A problem occurs because we then poll these elites to see what we should be thinking.

These elites take many forms. They can be impoverished civil rights activists, wealthy media figures, or even those who inhabit an online community like Twitter or Metafilter.

This is the same problem that we encounter with surveys, which measure the thoughts of the people who can answer ten questions via their home phone number on a Tuesday morning at 10:30 AM.

Our media thrives on false elites because it makes for an easy story. Look at a small group, see what they think, and report it as reality. Although it is misleading, it makes for better symbolism than trying to get into the depth of a story.

In addition to these customer elites, formed of those who use products and therefore are presumed to be hip and wise, we have permanent elites based on industries. There’s the film industry in Hollywood, the government elites in D.C., and the digital elites in NoCal.

Each of these groups has two salient characteristics: first, they are chosen to represent more than themselves; second, by having been chosen, they are cut off from normal life and immersed in a specialized community shaped by the interests it serves.

The result is a total disconnect from reality. This is one of the many layers of disconnect. First, socialization is based on what we wish were true, not what is. Next, democracy is based on an aggregation of lowest common impulses. Finally, elites summarize this in symbols.

It is no surprise that elites are thus both Ivory Tower types and people who indulge in false humility and the pretense of defending the common man, the poor, the under-represented, etc. They need to justify their Ivory Tower, so they pick symbols of victimhood to defend.

The result however is that the people who are actually making life work the old fashioned way, which is by adapting to it, have zero representation, and most representation instead comes from the Ivory Tower types and the sample audiences they choose.

As a result, we have a pluralistic society where people are encouraged to believe in any ideal or lifestyle they choose, while the elites who endorse this philosophy have a non-pluralistic view because they are shaped by the demands of being elites.

It is no surprise then that we have a loss of sacred things, of heroes, and of values in common. We have ceded our values to elites who symbolically represent us, but don’t know us, and don’t care to.

Traditionalism and the Cosmos | Generation Identity: A Declaration of War against the ’68ers by Markus Willinger