Generation Identity: A Declaration of War against the ’68ers by Markus Willinger

Generation Identity: A Declaration of War against the ’68ers
by Markus Willinger
103 pages, Arktos, $16 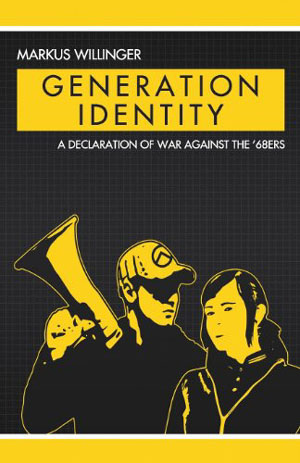 How do you mobilize a large number of people to act against what they’ve been taught is the only “logical” course of action? First, you appeal to that which is (sensibly) beyond logic, emotion and aesthetics. While this book tackles a great number of political issues, its biggest strength is in its ability to channel emotion.

In particular, it is worth paying attention to the term “68ers” which appears in the subtitle. While this term specifically refers to the hippie wing of the Baby Boomer generation, it also adequately describes any modern progressive. They are a fusion between Social Marxist ideals, eternal liberal values as applied by a modern bureaucracy, and a certain amount of personal desperation.

Against these people “Generation Identity” marshals the formidable forces of desperation, loneliness and alienation and attempts to channel them through hope. Willinger acknowledges the problems that plague millennial generations — alcoholism, promiscuity, drug use, apathy — but points to them as a symptom to be overcome, not a desirable end-state.

Where this book triumphs, as where many great works of literature have triumphed, is in encapsulating a spirit. That entirely vague term refers to the outlook and motivations that combined form a type of life-force. About half of the book is devoted to refuting 1968, but the other half is a call to action for the disillusioned later generations, and a pathfinder for an antidote to their fears and boredom.

The spirit of Generation Identity as Willinger sees it is to entirely reject the quasi-Socialist Utopia of the 68ers, and instead to turn toward things that through time immemorial have sustained human life at a higher level than subsistence. In particular, this manifesto targets multiculturalism, atheism, sexual liberation and the death of the family, and monetarism, which is that focus on commerce first that is shared by both socialist and capitalist systems.

The critical minds among us were the first to see through your smokescreen. We listened sceptically to your hollow phrases about tolerance and emancipation, and yet we didn’t let your wishful thinking throw sand in our eyes. Our gaze penetrated the obscuring fog of your mental confusion and saw things as they are.

We watch as your dead ideas and laughable hallucinations writhe on the ground, gasping for breath, waiting for someone to deal them the mercy blow.

We’re glad to assume the task, and to finally bring peace, to you as well. (33)

Generation Identity: A Declaration of War against the ’68ers uses this targeted response to dismantle the 1968 generation’s ideas by illustrating how the supposed benefits of these Utopian ideals did not come to pass, and instead, what we got was dysfunction. Willinger repeatedly notes how Baby Boomer programs are deep in debt and dysfunctional, leaving a mess for subsequent generations.

Interestingly, this book hints at the cause: a fundamental desperation brought on by post-WWII hopelessness. In my view, it could go farther, and point out how 68ers are fundamentally suicidal in that their programs are not designed to produce Utopia, but to destroy civilization itself so that with the deaths of the 68ers, all else is killed as well. It’s a social murder-suicide.

However, the point of Generation Identity: A Declaration of War against the ’68ers is to bring about this spirit that unites new generations against the bad ideas of the past. Getting lost in theoretical or practical arguments would obliterate the point that is being made, which is that when you look at society as a whole, the experience of it has become miserable under the 68er regimen.

As a result, Generation Identity is a new voice rediscovering old truths but putting them into a new context. This enables understanding by those who otherwise would not see the reason to abandon our bad habits, change our outlook and work toward fixing society. For this reason, Generation Identity: A Declaration of War against the ’68ers is more of a bridge than final destination, and more of an art than a science.

For example, this book talks about democratic values. Most of us by now have seen that democratic values place the individual before truth itself and thus are inherently bankrupt. But a bridge must be made. Similarly, not everyone needs to justify their opinion that multiculturalism has failed. It simply has. However, these are small quibbles.

You attacked the world’s cultures and nations by creating multicultural societies.

You attacked the notion of hometowns by trying to make all cities the same. Homogenisation and standardisation are truly the most powerful weapons in your struggle against identity.

For decades, you attacked all identities and tried to artificially overcome all your own contradictions. You fought this war savagely, with all means, and yet you have lost.

Your struggle against identity was in vain from the very beginning. The desire for one’s own homeland, demarcated by borders, is stronger than everything else. (83)

On the whole, Generation Identity: A Declaration of War against the ’68ers succeeds in the way many great books do, which is that it establishes a new direction and purposefully leaves it vague. This allows others to construct their own visions in the house that this book has build. In turn, that process is how we will go from “spirit” to implementation.

Willinger shows us the big picture by using our emotions. What would a new society feel like — what does the old society do to us inside — why we should care. These are the targets of this book, and it not only paints them well, but gives us a new direction in which we can create our own visions for our future.

The false nature of elites | What lowers the mighty