The Evil Emperors of The Amerikan Empire I: Franklin Delano Roosevelt 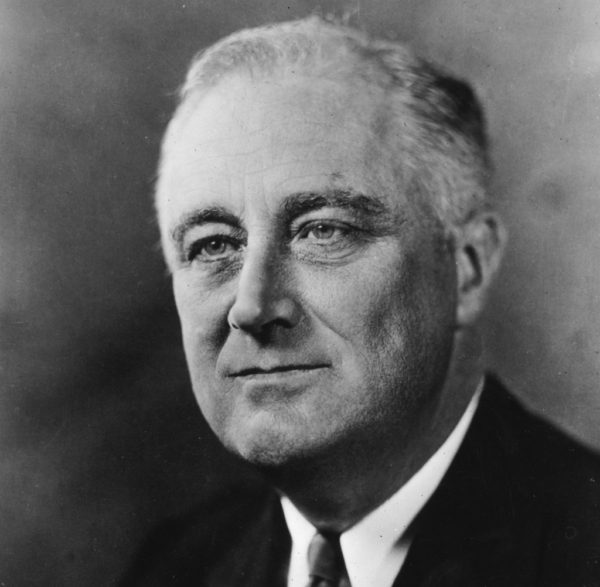 Strip away the shrink-wrap cocoon of ego-gratifying, jingoistic Whig History and we discover that at least six recent Amerikan Emporers could qualify as legitimate evil emporers who have materially and morally worsened the commonweal of the average decent American citizen. Today we describe the nefarious contributions of the odious FDR.

Follow the so-called “inside baseball” coverage of Amerika’s quadrennial electoral eructions and you’ll always hear some detestable, soul-sucking ghoul-geek like David Plouff or Karl Rove discuss how they intend to stack up the voting blocks. You get your Black Block,1 The Hispanic Block, The Women’s Block, The Working Class Block, The Evengelical Block, etc… Just slam all these people into equivalence classes and collect them and trade them with your K-Street friends. All the fascinating things that Hedrick Smith talks about in The Power Game. Politics as a self-licking dog-feces ice cream cone. Politics reduced to an evil, self-perpetuating vote-sucking machine.

So how did American Democracy become this soulless empire of political coalition building? It came to be that way because FDR perfected the art. The art then worked like hell. How well? So well that Franklin Roosevelt won in 1932, then in 1936, and 1940, and 1944. He has the dubious honor of having spawned his very own constitutional amendment which limits presidents to two consecutive presidential terms. In many ways he was the very architect of the cynical and manipulative political machines we so hate yet still see repeatedly grind their way into power.

As Amerika’s Proto-Putin, Roosevelt established the first wonk squad of professional electioneers. Dubbed “The Brain Trust”, these men worked on honing and messaging his message and increasing his appeal. His 1932 election campaign first introduced his idea of a “new deal for America.” By 1936, he had further honed his strategy and now concentrated upon locking in the “New Deal Coalition.” This INGSOC of emerging democratic socialism is described below.

Roosevelt had put together what came to be called the “New Deal Coalition,” an alliance of voters from different regions of the country and from racial, religious and ethnic groups. The coalition combined southern Protestants, northern Jews, Catholics and blacks from urban areas, labor union members, small farmers in the middle west and Plains states, and liberals and radicals. This diverse group, with some minor alterations, would power the Democrats for the next thirty yearsâ€”and it was Roosevelt who put it together.

Like Orwell’s literary INGSOC, the system needed a controlled anomaly. It needed a Lucifier to scare the butts into the pews every Sunday. Orwell’s governing malefactors invented the imaginary Wandering Jew Emanuel Goldstein. Proto-typical socialist class warfare demagougery follows below.

Referring to “business and financial monopoly, speculation, reckless banking,” FDR crowed, “Never before have these forces been so united against one candidate as they stand today. They are unanimous in their hate for meâ€”and I welcome their hatred.”

When faced with the honorable tradition established by America’s first president, George Washington, Roosevelt would not let a bunch of fuddy-duddy sticks-in-the-mud stand between him and the political power he worshipped.

In 1940, Roosevelt decided to run for an unprecedented third term, breaking the tradition set by George Washington that limited Presidents to eight years in office. FDR had been coy about his future for most of his second term, but finally told confidantes that he would run only if the situation in Europe deteriorated further and his fellow Democrats drafted him as their candidate. Nazi Germany’s successful invasion of Western Europe and defeat of France in the spring of 1940 took care of the former condition; FDR’s political operatives, especially Chicago mayor Ed Kelly, arranged for the latter.

So Franklin Delano Roosevelt deserves to go down in Non-Whig History as a malignant prince of Demotism and one of Amerika’s Evil Emporers for three reasons.

Franklin Delano Roosevelt may have been merely the predictable result of democracy on its downhill slide into ignorant demotism. Yet he bears blame for exacerbating weaknesses inherent to our system. I indict his memory for using them to acquire more power for himself at the expense of both comity and commonweal. Curse the name of Franklin Delano Roosevelt. He was indeed an evil Amerikan Emporer.

1 It’s at this exact point in time when their individual lives no longer matter.

It’s The Misery, Stupid | What Is The Root Of Human Behavior? Pretense, Posturing And Bragging