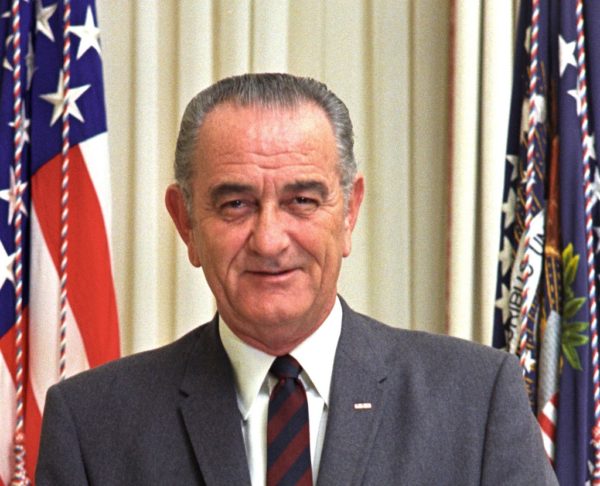 Strip away the shrink-wrap cocoon of ego-gratifying, jingoistic Whig History and we discover that at least six recent Amerikan Emporers could qualify as legitimate evil emporers who have materially and morally worsened the commonweal of the average decent American citizen. Today we describe the nefarious contributions of the odious LBJ.

Imagine you hated the US of A with a purple passion. Imagine you could install your malignant pawn in a state of almost uncontested power. What might you do? Starting a nuclear exchange with Russia would be gauche and leave you only a set of ruins that you couldn’t even inhabit, much less rule. So WWSD (What would Satan do?)

In the wake of the made for Hollywood whacking of playboy president JFK, the Democratic operatives with bylines int he US media created an atmosphere in which Pee Wee Herman could have won an electoral landslide. The winner in 1964 was Lucifer himself: Lyndon Baines Johnson. So we return to our previous inquiry WWSD?

The first subtle evil unleashed by Lyndon Johnson involved a doctrine inserted into the Civil Rights legislation. This was the doctrine of disparate impact. This legal theory was a staple of the litigation that would follow the passage of The Civil Rights Act of 1964. This empowered government to intervene on the side of a plaintiff even if no discrimination was initially intended. Here’s a explanation of how this empowers bureaucratic score-settling and the destruction of basic Freedom of Association rights through perpetual lawfare.

Disparate impact discrimination is a legal theory first recognized by the courts. In addressing a Title VII discrimination case, the U.S. Supreme Court said that the burden of proof shifted to the employer once the employee (past or present) or job applicant was able to prove that a particular employment practice caused a disparate impact on their protected class. The Civil Rights Act of 1991 later amended Title VII, clarifying that once an employee establishes the existence of a disparate impact from an employment practice, the employer must then prove that such practice is “job-related for the position in question and consistent with business necessity.”

LBJ could have stopped there and done plenty of damage, but The Civil Rights Act of 1964 was only an LRIP. He had far more meyhem to unload on the Amerian People. You see, America’s standing immigration policies prior to LBJ’s Reign of Error involved quotas based on national origin of the immigrants. Those not favored by these quotas predictably cried !RACIST! Here’s how cultures get undermined below.

This gave LBJ the opportunity to swing the immigration wrecking ball into the American culture and economy that he inherited as emporer. He injected the malignant twin viruses of diversity and economic replacement via the Hart-Cellar Immigration Act of 1965. The influx of foreign population began with trickle and soon reached a torrent.

“The 1965 immigration law quickly transformed the ethnic portrait of the United States,” scholars have noted. At first the new immigration came largely from southern Europe, especially Italy. But that stream played out in about a decade. Meanwhile, immigration from Eastern Europe was limited by repressive communist governments.By 1980, most immigrants were coming from Latin America, Asia, and Africa â€” in numbers far greater than the annual average of 300,000 that had prevailed during the 1960s. Despite assurances by Hart-Celler advocates that the bill would add little to the immigrant stream, more than seven million newcomers entered the country legally during the 1980s. That trend has continued. Meanwhile, illegal immigration also began a decades-long surge…

Another nefarious aspect of Hart-Celler was the skill-based criterion of immigrant admissions. This allowed industries that wanted to deliberately bring in surrogate workforces to replace the legacy working-class that had grown used to increasing wages, benefits and opportunities. This crashed into a brick wall of decreasing economies of scale and increasing international competition. This forced cost-cutting measures. This will typically start with payroll. Rather than doing with less, the Hart-Celler Act allowed employers to do with cheaper. The recent H1B assassination of Walt Disney’s homegrown IT workforce.

So LBJ laid waste to Freedom of Association, persued an immigration policy that laid out sugar-coated rat poison for American blue-collar culture, but no! He sadly wasn’t through wrecking AMerica. Then came LBJ’s quaint little conflict. His war to embarass Amerika. Vietnam.

LBJ’s kinda-sorta-but-not-really commitment to winning The Vietnam War established a precedent of disinterested warfare on the frontiers of the empire. It was conflict designed to put a stick in the spokes on COmintern’s bicycle wheel. It was international realpolitik involving no direct American interest. 58,220 AMerican soldiers died so that LBJ could play the geopolitical game of thrones. The legions of the Amerikan Empire were sent to go bungle on the far-flung borders.

I could blog all day and not truly express the extent of Lyndon Baines Johnson’s iniquity. The welfare legislation he rammed through congress was the piece de resistance that cemented the well-deserved, sulphurous legacy that clings to his career of evil. He deliberately cultivated his programs such as AFDC to create a client of servile dependency. His bastard bounty welfare programs wrecked havoc on the structure of lower income familes and reduced them to peasantry. LBJ’s boast regarding his Great Society welfare initiative speaks volumes of how Liberals truly think of race and humanity.

Iâ€™ll have those n*gg*rs voting Democratic for the next 200 years.â€ Lyndon Baines Johnson about the Great Society plan.

SUch was the almost glorious evil of Lyndon Baines Johnson. He destroyed Freedom of Association in the name of Civil Rights. He poisoned America’s immigration system in the cause of ending racism. He humiliated America’s military and blackened our name throughout the world in the process of slow-walking embarassing defeat in Vietnam and made the promotion of bastardy an electoral strategy int he name of promoting the general welfare. Lyndon Baines Johnson was truly an evil Amerikan Emporer.

Is Western Civilization Suffering From Burnout? | When The Music Stops, You Get Replaced