The Centuries of Revolution: Democracy–Communism–Zionism, by William White

The Centuries of Revolution: Democracy–Communism–Zionism
by William White
206 pages, The Barnes Review, $25 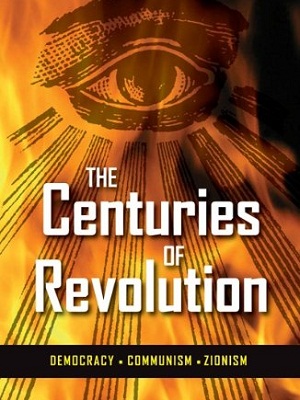 The career of William White is as complex as the man himself. Starting as an anarchist revolutionary, he published weekly or daily screeds on the popular overthrow.com website.

Over time, however, his screeds increasingly turned against the anarchist establishment, which had been captured by the liberal establishment, and eventually drifted toward the right.

At the time, White explained that this change occurred because the policies of the left were not benefiting the working class they claimed to speak for, and in fact worked against it.

This viewpoint won him many fans, as like many of the Generation X latecomers (White was born in 1977) he was slowly awakening from the media/social dream of “youth culture” and coming to recognize reality.

Eventually he ended up becoming a National Socialist leader with the American National Socialist Party, for whom he was an effective spokesman, refuting attacks with witty, informed and ideologically coherent statements — unique in that movement then and now.

His writing became a mashup of three important sources: (1) the “radical Traditionalist” of Julius Evola, (2) the mythological national socialism of Savitri Devi, and (3) in a nod to his anarchist roots, the popular sentiment against government and the New World Order.

As a result his writings read like those of a highly developed Charles Manson, mixing mythology and conspiracy and historical analysis, with an eye not toward exact causal accuracy so much as a mythic-symbolic vision of events.

White claims his book, The Centuries of Revolution: Democracy–Communism–Zionism, is about the Jewish role in the destruction of Western civilization, but at the same time he suggests this is mythology and that the decay itself arises from a terminal spirit disease shared by many Westerners:

The goal of these world-destroying powers cannot be obscured, and those who try to speak of the Jews and gentiles who participate in these evil religions as members of the white race or potential comrades in the struggle against other imagined enemies are as much a part of their conspiracy against mankind as those who advocate openly for the world destroyersâ€™ gods and ideals. Humanity is dying, and it is very likely that the death of the world and the ultimate enslavement of mankind cannot be prevented. (10)

In this paragraph, he trips his hand, which is to point out that his use of Jews and Judaism is an allegory, much like it was for Hitler before him. The real topic of this book is not a religion, but the thought-deception that is in common between Democracy and Communism and how the fusion of those two forms what we properly know as the New World Order, globalism, internationalism, etc.

There is no way to avoid saying that I disagree with many of White’s assertions. As someone who has read him for years, from his anarchist days through his most esoteric of religious revelations, I trust in the source but reserve the ability to disagree with him. I think blaming “The Jews” for our problems is a mistake, because it (a) lets us off the hook for fixing the disease within, (b) creates a surrogate for the real activity of reform in the abuse of Jewish people, and (c) cultivates a culture of blame, hate and fear that quickly leads to a culture of guilt, equality and pacifism.

As a good Spenglerian, I also think it is unmitigated horse puckey to blame The Jews for the downfall of civilizations, since it happened to great empires like the Aztec, Maya and Angkor Wat without a single Jew present. However, unlike liberals, I can read the controversial opinions of others and disagree with them without having to insult those others, psychoanalyze them, or claim their intellectual inferiority. I respect Bill White and was glad to read his book.

The Centuries of Revolution: Democracy–Communism–Zionism exudes charisma through the confidence and facile intellect of its writer. It is a delight to read because unlike modern books, it does not hang itself upon a quest for details, but offers a big picture view that is equal parts history and mythology. In this, the objective of the author is revealed: to write a saga-level epic explanation for the modern time, its origins and its ultimate intent, which in his view is the destruction of humankind (and I would agree, if we place “de facto” before “intent”).

White stitches together fragments of history and ideology — national socialism, radical Traditionalism, and modern anti-Republican conspiracy theory — to make a convincing explanation for the seemingly heedless mad rush to self-destruction by Western nations. The narrative has a bit of a breathless character to it as he pushes to include every aspect of modern life that he can, which is typical in writings that search for the origins of downfall beyond the visible. His book does a good job of showing that the visible parts of our civilization, including government, media and business, are not revealing their actual motivations.

He also correctly notes the downfall of Western civilization in liberalism, although he attributes it to Jewish and Masonic forces:

The essence of all Jewish and Masonic liberalism is so-called â€œindividualism,â€ which, as the philosopher Julius Evola has noted, is, in the modern context, not the development of the individual to the highest potential, but the division of the individual from the society in which he finds context and meaningâ€”what Evola calls â€œindividuation.â€ (141)

In this White has said what so many in the West are afraid to admit: individualism, or the split of the individual into a force against collaboration through pluralism, is the root of both Communism and Democracy, hence the reason that after the fall of the Soviet Union, the West has emerged with a hybrid capitalist-Socialist system rooted in the same liberal dogma that propelled the French Revolution of 1789.

He correctly identifies the death force in this regard, although he sees it as a proximate cause through which Judeo-Masonic forces work, while many of us see it the other way around — liberalism is the cause, and many Jews and Masons, as well as a great many other Westerners, get caught up in the insanity of liberalism and thus become mostly-unwitting agents of destruction.

When White shows that liberalism is the pervasive organizing force and central ideology behind both left and right, he shows us a pervasive subversion of Western culture by an element that is fundamentally emotional, and hence demonic. In his view, the forces of destruction are compelled to lie, cheat, steal, make perverse and vandalize because they are obsessed with hatred for any that are beautiful, gifted and wise.

This mirrors the progress of liberalism through the last millennium, starting from its innocent origins in the Enlightenment all the way through the snarling animal hatred of the guillotines and open-pit executions by Bolshevik death squads; it even describes the delight in perversity, irony, and hatred of the golden and beautiful that we see in American liberals, from their neurotic columns on OWN to their worship of organized misfit weakness in mass-culture movies like Napoleon Dynamite.

Nothing that the government and its press tells us about the state of affairs in this country, or in the world, is realâ€”all of it is an elaborate and orchestrated fictionâ€”and there is nothing that can be done to change the minds of the culture destroyers or to bring them and their instruments of power into accordance with the truth. They can be fought and murdered, or one can surrender to them. (190)

While White urges direct action of a more militant sort, it is possible that his statement above alone can show many the scope of what we’re up against: a monolithic infiltration of our society by an ideology, liberalism, that appears when any society ages, and must be fought or it brings destruction like any other form of entropy.

Among his many analyses of Western decline, White hits on some extraordinary insights, such as the innocent origins of the support of liberalism by most people:

In a sense, Hegelâ€™s ideology was an extension of that of Aristotle, who saw virtue in the mean between two extremes, but it was also a justification of the march forward of time, which Hegel was unable to see as the force which not only brings all things into being, but which also destroys them and renders them into nothingness. (47)

He is referring to Hegel’s dialectical materialism, or the idea that history moves through the creation of an idea, its opposite, and its compromise. That religious vision of Hegel’s was roundly laughed at by the philosophers of the day, but it describes the social pattern of humanity too well, which is that in order to get along with others, compromise is required. This compromise is the basis of mediocrity and eventually liberalism, because over time the need for compromise crowds out the need for leadership, and a society enters its senescence.

Ultimately I find explanations such as the above more convincing than the idea that Masons and Jews subverted the Aztecs, or even the West. Jewishness itself is under assault from Jewish liberals; we might see them as fellow travelers down the road away from globalism, if we saw clearly.

In fact, many estimates suggest that if Jewish outbreeding is not checked, they will vanish as a people on this earth within the century. Masons, while a favorite target, seem to be in decline, as is the West itself, beset by some inner disease that survives wherever there are people — and where “equality” is the dominant paradigm.

Writing about his experiences being convicted for making threats over a phone line, and subsequent exoneration on almost all of the other mostly-unrelated charges brought, White is at his most piercing. For a moment, he sees into the human condition and brings forth the crisis of equality, which is that with the anonymity and herd-behavior provided by liberal individualism, humanity tends toward the lowest common denominator: resentment, destruction and selfishness.

What I learned is that the human race, even those inclined
toward the best principles, are a race of cowards who care only
for prolonging their misery in this world, as long as it could be
prolonged. (195)

The Centuries of Revolution: Democracy–Communism–Zionism by William White may not feature on everyone’s bookshelf, but it represents the best articulation of a radical Traditionalist interpretation of the modern time. At the same time, it represents the worst of the mistakes of the past, which include a tendency to externalize blame and not look closely enough at how individualism itself perpetuates our downfall.

Expertly written, with a depth of penetration of subject matter this author cannot hope to follow, this book offers insight into the ongoing need for humanity and especially the West to understand the roots of its decay. Read as an allegory, and not a literal document, it provides us with a blueprint for removing our madness, which is a counter-revolution against Aristotelian and Hegelian means, a deprecation of liberal individualism, and a restoration of the principles of the past that made us great.