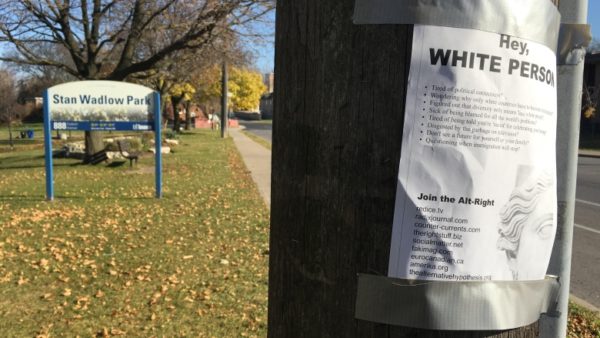 Like clockwork, the Leftist news hysteria explodes over the Alt Right flyers that recently showed up in Toronto. The CBC reports on this terrifying dissemination of information:

A Toronto resident who says she was horrified to see a racist poster on a pole while walking to her children’s school on Monday is blaming it partly on Donald Trump’s victory in the U.S. presidential election last week.

Not having learned their lesson from the recent presidential campaign, leftist media continue to stubbornly refuse to understand the current year in hopes that if they repeatedly misreport on it, it will just go away. In reality, Donald Trump is not the cause of these growing cultural forces, he is the result of them; he astutely took advantage of them. These flyers would of course have gone up whether or not Trump won.

One womanâ€™s response is quoted as â€œIt is racist. All cultures should be respected.â€ If she had visited the sites shown on the flyer instead of letting herself be spooked out of thinking, she may have learned that the Alt Right largely agrees with the later. Cramming a plethora of incompatible cultures into a geographically tight space, like Toronto, where conflict will inevitably arise, is not respect, it is a meat grinder. This is why we advocate ethno-nationalism, which allows each culture to chose its own path and flourish in its own space.

The thought control police â€œhave yet to determine if the posters will be investigated as a hate crimeâ€, but until then, Canadians can be relieved to learn that, for once, their tax dollars are going to a worthy cause: advertising the Alt Right and Amerika.org.

The Stories Keep Rolling in…

Losing “We” And Gaining “Us” | Interest In Alt Right Is Rising: Amerika Stats