A while ago, I friended a family friend’s son on Facebook. Nice guy, always pretty quiet, but generally reasonable – at least, that’s how I had known him in the 90s, and I hadn’t really seen him much since.

After friending him and his sister, I realized both were Ron Paul supporters. Sure, this could work: at least there wouldn’t be a lot of unfriendly liberal/conservative banter and we’d be able to get along. Then I started paying closer attention to some of his posts.

The status updates contained mostly self-labeled “rants” about how there’s a new world order out there, even using the term “Matrix” to describe the reality people experience each day.

As I’ve been blocked from viewing his account, I’m unable to show the reader any of these. But rest assured, there was much linking to infowars.com about how there is mercury in all of the vaccines your kids take, how a global new world order was going to take over and enslave the human race, how fluoride is terrible for you, and how if you didn’t believe any of this or watch his linked videos, you’re a slave and a moron. 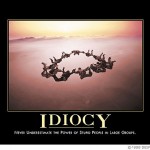 His friends jumped in whenever someone dissented in any way – typical crowd mentality, which is unfortunate.Â  As stated many times elsewhere in this blog, moronic crowd logic thinks only about effects on our individual selves and then builds a (anti-)philosophy of individualism around that fact, instead of looking at life holistically through the natural order.

I tried gently steering the discourse toward something positive, like reality, asking him to challenge his assumptions and ensure they were well grounded before shouting people down – for example, about how they are eugenicists if they would like to see any type of reduction in human population. Following is one conversation which ended in his blocking my account.

Here, he had posted a link about how someone was complaining of overpopulation, then laughing in his status about how silly it is to even think such a thing. I had mentioned to him that just because the world could support more humans short term, does that justify our consumer lifestyles or our numbers? And wouldn’t we be better suited to taking up far less arable land and striking a balance with nature? He responded:

“considering there are NOT too many of us, cause we all know the earth can support about 100 billion people, its a joke to say theres not enough nutritious food and fresh water. Fresh water is everywhere. generate it out of the air like I do. http://www.facebook.com/l/;www.ecoloblue.com that being a side issue…i DEFINITELY DO NOT want to reduce the population…not even by one life! Only a eugenicist would advocate such a reduction.”

Here, the obvious logical fallacy argument applies, along with the defensive individualistic rant. One hundred billion (cue Dr. Evil imitation) is over fourteen times the current population, and look how many billions are already suffering for lack of decent leadership and the relief valve in the form of illegal immigration and bad trade agreements provided by Europe and the US?Â  This reality makes no sense to most people brought up in quiet suburbs.

The following is what he had to say about the idea of a possibly Kenyan-born President Obama…when I told him that it didn’t really matter where he was born, only that he was the next oligarch in line to take the crown, he responded:

Birth cirtificates are definitely an issue, and pushing them aside is a sign of delusion. Considering Obama was not born in the US, as being required to by the constitution in order to be President, its a huuuuuuuuuge issue. wouldn’t surprise if Arnold is the next president, but he makes me sick cause we all know he is a Natzi supporter… http://www.facebook.com/l/;www.arnoldexposed.com”

We once again see the polarization of democracy – arguing about semantics like birth certificates instead of how good a leader Obama is and what his qualifications are.Â Â

There’s also a humorousÂ jump from Consitutional law – a fair argument, but again ignoring the reality of who Obama actually is – to how Arnold Schwarzenegger is a Nazi (not Natzi) supporter.

I tried to tell him that it was the fault of idiot voters who would actually allow someone like Ah-nuld to be elected the leader of the third-largest economy in the world (well, before it went bankrupt). The response:

“well considering there is widespread voter fraud, its not a problem of solely blaming the people. but the point is, if someone is not eligable to be president based on that birth cirtificate…then they SHOULD NOT be president…duh! Besides it does matter. We are exposing the corruption, the lies, and the tyranny!”

So nothing matters to him except his own conspiracy theory, perpetuated

by websites hungry for traffic, and the fact that they are “exposing the tyranny”. Note the lack of solutions or speaking of the finer points, like root causes, effects, and how to move forward – again, a view into the defensive political polarization we see in our “democracy”.

I was done playing the nice guy, so I tried to tell him how action is what counts, not exposure. Even if there are “lies and tyranny” at the highest levels of government (aren’t there always?), the best way to change it is first locally (read: organically).

Why do you think white enclaves exist, I asked? Because people want to separate themselves from the “lies and tyranny” (or, nanny state and wealth resentment), especially as it pertains to their wealth – the biggest motivator for most people in our society, yet another problem not discussed in the ideas of liberalistic “freedom” and “democracy”.

I quoted Pentti Linkola and told him that only someone who hates life would, a) shout down someone as a eugenicist like a liberal shouts down someone as a racist to end an argument prematurely, and b) advocate that human population grows instead of shrinks considering how disorganized most countries are.

I also pointed out that we are only on lease on this planet and will be gone long before the planet is, stating that an ice age would be the best thing for humanity, as it was thousands of years ago when the first civilized Scandinavians that survived decided to stick around in their new, cold surroundings.Â  A healthy cultured ensued when people realized how powerful nature was and what a profound effect it has on all life. 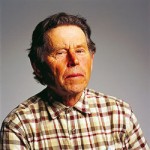 paranoia, citing the crowd favorites of freedom and liberty, denying anything having to do with nature:

“its clear at this point you have been extremely brainwashed and conditioned. Its ok. we all were, but mostly everyone still is. Since you advocate a population reduction…you’ll find nothing wrong when the global elite decide to kill all you know. All the innocent will die. It is not up to you or me to decide who owns the Earth or whether we are temporay residents of the planet. At this point, you’re clearly someone who is against freedom and liberty for all those who live on this planet. You will be deleted and blocked so that you don’t trick others here into supporting your eugenicist views, and its sad you have not woken up. You werent even able to watch a free online movie that would have shashed your matrix of denial bubble. I won’t waste anymore time with you.”

So I was dealing with the maturity level of middle schoolers in trying to gently swing them over a bit to reality. This was a pretty cool experiment, if one that required patience.

At one point a few weeks back, before things got nasty & personal for him, I emailed him and told him a few things:

1. that I would lay off his posts if he wanted me to do so, to avoid any nasty confrontations

2. that asking solid questions lays the groundwork for reasoned discussion and I can’t ignore that fact

3. that I don’t want to offend him but would challenge anyone’s assumptions if they were so broadly based (NWO, Matrix, etc.).

At the time, he said it was fine and that there were no issues with me continuing to get into discussions with him and his friends about his rants. I guess the idea that a growing human population and its plastic-world consumption are not good things sent him over the edge.

This interaction and the mess which ensued taught me a few things:

Sitting in front of computers and shouting about paranoid delusions does nothing to help any situation, and social networking sites – instead of opening people up to new views and more of reality – only serve to allow people to place their heads further into the sand. One view on one website is taken for granted and grabbed onto with all the force of the crowd, until that view becomes passe and it’s thrown out for a new view.Â

So social networking really only perpetuates crowd logic and discourages actual social discourse, and the evidence is above.

A house of cards and your place within | Halloween: when fun subverts meaning