Fillet of a fenny snake,
In the caldron boil and bake:
Eye of newt, and toe of frog,
Wool of bat, and tongue of dog,
Adder’s fork, and blind-worm’s sting,
Lizard’s leg, and howlet’s wing,
For a charm of powerful trouble;
Like a hell-broth boil and bubble.

In William Shakespeare’s England, the practice of witchcraft was already ancient. The celebration of natureâ€”the worship of earth, sky, and the changing seasonsâ€”is humankind’s oldest faith.

Like the Christianized Easter and Christmas festivals, Halloween was an important time that served a purpose.

The Celts believed that at the time of Samhain, more so than any other time of the year, the ghosts of the dead were able to mingle with the living, because at Samhain the souls of those who had died during the year traveled into the otherworld. People gathered to sacrifice animals, fruits, and vegetables. They also lit bonfires in honor of the dead, to aid them on their journey, and to keep them away from the living.

Moving on as a community event from grieving over deceased loved ones so people could get back to their lives seems like a healthy practice.

As a result of their efforts to wipe out “pagan” holidays, such as Samhain, the Christians succeeded in effecting major transformations in it. In 601 A.D. Pope Gregory the First issued a now famous edict to his missionaries concerning the native beliefs and customs of the peoples he hoped to convert. Rather than try to obliterate native peoples’ customs and beliefs, the pope instructed his missionaries to use them: if a group of people worshipped a tree, rather than cut it down, he advised them to consecrate it to Christ and allow its continued worship.

Fast forward to now. You buy the kid another plastic mask, plastic hatchet and plastic bucket and drag her around begging processed sugar treats from everyone. What good is this mindless, empty routine?

Processed sugars and carbohydrates, which turn into sugar, cause a rise in the insulin level of the blood. This also raises the endorphins level, a natural mood upper in the brain. These sugars causes the body to have a chemical high, mentally, which results in a lift in mood. .

To maintain a normal level of endorphins in the brain the individual must eat more sugar and/or carbohydrates to get out of depression and maintain a normal mood level. This causes a vicious cycle of addiction, physiologically (Nay, 1996). This is also directly comparable to the cycle that is developed after excessive endorphins are released into the body from the use of alcohol. 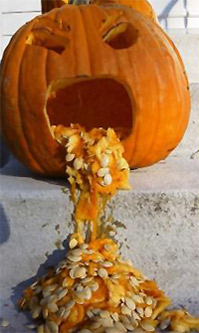 Halloween is often on a work night so it can be a total hassle to take kids around door to door to pester the neighbors for the junk food they’ve been socially pressured to hand out.

Tip: natural food and home cooking is appropriate for every day of the year. Decent recipes for Halloween and Autumn season are easy to find and they don’t consist of 130% processed sugar with food coloring added for variety.

Why not start locally and change this ancient tradition from pure consumerism to festive, reverent and awe for the spiritual side of living?

As an alternative that is more traditional, yet oddly enough, less likely to conflict with many religious beliefs, simply spend some time in remembrance for a loved one who has recently passed on and ignore the trick-or-treaters.

Try elegant thematic gatherings and fairly authentic with all things therein instead of always cheap, always plastic, always some random mix. Although pumpkins are a native New World gourd, they’re natural and are now a part of the festival, so they’re in.

Ceramic and steel objects like skull candle holders, medieval weapons and jewelry are decorations that last for generations rather than a few years until they deteriorate as plastics to be discarded.

Candles and Autumn type incenses, oils, and even blazing torches are another excellent fit.

Costumes, if desired, also give us another junk plastics or authentic natural materials option.

Applying some standards for quality or authenticity in our lives can get us around passive Green Halloween type reactions and its oblivious consumerism counterpart and make for much more charming, non-destructive life experiences.

Opposing this new idea is the old fun-as-the-goal of modern living, but only when it is cheap and disposable. While we don’t need to lose fun-having, it is best had as a side effect of capturing meaning in our lives without leaving destruction in our wake.