Bibles in schools: a non-issue

People are going to absolutely freak out about this, at least until someone points out to them why it’s hypocritical to do so:

The school year is almost here, and if literature of the Bible is not already offered in your child’s school, it will be this fall.

Books are a common sight in classrooms around the nation, but the Bible is one book that is not. Come this fall, a Texas law says all public schools must offer information relating to the Bible in their curriculum.

“By the end of the year, what they begin to realize is that it is pervasive. You can’t get away from it. The kids came back and were like ‘It’s everywhere,'” said John Keeling, the social studies chair at Whitehouse High School.

The thing is that this really is a non-issue: we all agree that all children must be taught some central system of morality. Since the 1960s, at least, our schools have become heavily invested in teaching values our government considers essential. 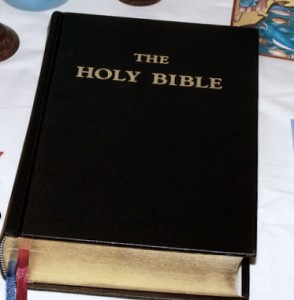 And no raging protests have come about from that!

So clearly, we all agree that all children must be taught one central curriculum of moral logic — so now we’re just fighting over what that is.

And how far is the Bible from any of our values systems? Probably not all that far. Among other things, that longhaired, probably pot-smoking radical Jesus Christ encouraged ideas of equality, protecting the poor and meek, and fighting centralized authority — sounds a lot like the liberals of today.

Of course, he also told people there was a hard line in the sand between the good people and the predatory, parasitic, opportunist jerks, and he did kind of hint that God just handed you what you got, and you wouldn’t change.

So maybe we’re closer than we thought, and not just on the Bible:

Large majorities of both left and right wing radicals, but few moderates, agree that â€œWeâ€™d be much better off now if our foreign affairs were conducted out in the open, for all to see, rather than secretlyâ€ and that â€œI often feel that the really important matters are decided behind the scenes by people we never even hear aboutâ€ and that â€œMost people donâ€™t realize how much our lives are controlled by plots hatched in secret places.â€

Both groups can be equally intolerant of free speech. Only about 40% of both left and right wing radicals, but 71% of moderates, agree that â€œFree speech should be granted to everyone regardless of how intolerant they are of other peopleâ€™s opinions.â€

Regardless of ideological convictions, the far most important factor deciding how far you’ll go within politics is your psychological motivation. If you look at the Far Right and Left, the reason to why they fail as movements is essentially their group psychology. They’re more focused on being oppositional and ideologically “pure” than on working with real issues in a serious and socially acceptable fashion to actually get something done. Ever wondered why Marxists and neo-Nazis always show up at each other’s rallies to destroy? Their goal is to be a cult waging war against other cults.

So as we can see, this is a non-issue dressed up as a big issue so that one political group can get ahead of another. They’re trying to use us and our outrage as leverage for their own ends, not in any particular drive to make life better.