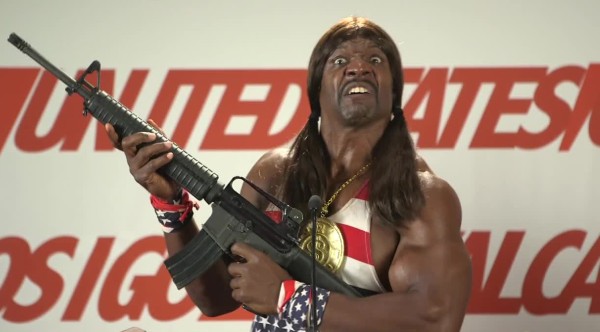 Back in the bad old dark ages, civilizations were based on the organic model. That is, unequal participation according to role, following a hierarchy based on purpose. In these societies, when something went wrong, the first thing they did was to purge the bowels by dumping all foreigners, known criminals and defects, then tackling the problem.

Under the organic model, this type of xenophobic differentiation makes a lot of sense. The goal is health and so when something goes wrong, get rid of anything that seems out of place and redirect energy to vital processes. You know what those are, and so anything else that stands in the way of the vital is a threat.

This process came to an end in 1940s. A talented artist named Hitler rose to power but, like most Europeans, he could not let go of his addiction to social welfare states. As a result, he hybridized his conservative leanings with leftism and made a muddle of things. This meant that instead of running a few pogroms and driving the Other out of town, he had to have a “final solution” to it. Since that time, anything smacking of nationalism or xenophobia has been taboo in the West.

And yet xenophobia as a virtue has revisited us. From Victor Davis Hanson:

America in the age of Obama is spiraling toward a historically familiar chaos of the sort found in 19th-century Austria-Hungary, the former Yugoslavia, and contemporary Iraq and Lebanon. When people of different races and religions cannot get along and are whipped up by their careerist tribal leaders, then the state, to survive, steps in, either to create separate racial enclaves or to rotate and distribute awards strictly on the basis of percentage representation within the general population.

Given the careers of racial fakers such as Ward Churchill, Rachel Dolezal, Shaun King, and Elizabeth Warren, it seems we must start demanding DNA checks â€” can we borrow from the Third Reich the concept of wearing identifying lapel pins? â€” perhaps with a mandatory 51 percent rule for formal inclusion in a designated minority category.

Hanson attributes this to Obama, but what we are really seeing is the return of a historical cycle. Diversity does not work because no two objects can occupy the same space, and thus as Hanson says, they will either become balkanized enclaves or constantly struggle for power over the society that includes them both. Diversity creates social chaos, entropy, internal division and distrust. It is, quite simply, a disaster. And so on a regular basis society purges it.

The first part of this return cycle can be seen in the racial enmity that grips the West. In both Europe and the USA, multicultural third-world populations threaten to replace the indigenous first-world ones. In all cases, the third-world population is as miserable as the natives about this because they will never get what they need, either, which is an organic society of their own. The first part of this cycle is coming to a close as minority groups demand segregation:

The notion that race is fixed and must override our character and behavior seems to be spreading even as America has become a fully diverse society in which, for example, many of the highest government positions â€” president, secretary of state, EPA director, energy secretary, attorney general, national security adviser, and director of NASA, to name a few â€” are currently or were recently held by people who are not white males.

…Under our present racial spoils system, 12 percent of all Oscar nominees each year apparently must be African-American â€” although so far Latino and Asian groups are not talking of boycotting the Oscars for real under-representation.

Remember those “Coexist” bumper stickers from the 1990s that suburban single women thought were so cute? This is the price of coexistence: each group becomes a partner buying into the scheme and milking the rest for whatever they can get because there is no unity and shared purpose. These groups see society as a whole as an oppressor and want to get from it whatever they can. They are acting in self-interest.

Only white suburbanites and limousine liberals see the kumbaya idea that we are all working together because of what our political system provides. We have freedom and stuff, so we’re all brothers, right? But the reality is that most people do not need “freedom”; they need only the liberty to conduct the type of stuff they are likely to do. However they do need a group identity because from that comes their sense of purpose and destiny, and from that comes the sense of well-being that allows them to say they are spending their lives on the right pursuits.

We thought we could deny the obvious truth of the racial cycle which is that each group must act in self-interest. This means that all other groups are working to overthrow you and take over your society if they can. For a time, that was limited by distance and the technological gap between the West and the rest of the world. That is no longer true. Now we are at each others’ throats, and only denial of reality keeps us from seeing that.

The solution here is to take what Mr. Spike Lee and others have advocated, namely African-American self-interest, to its logical conclusion. No ethnic group will be happy until it has control over its destiny and a purpose all of its own. This requires separating by a great distance to its continental home, and re-dedicating its efforts not to the abyss of diversity but toward self-improvement and self-rule.

Hanson calls it segregation but that word only applies if we believe it to be a permanent state. In the West, our racial tension has been there since the beginning and has always had a cycle of its own that alternates between riots and buying off the problem with more welfare, benefits and public recognition. Segregation would be two groups in the same society with different places; nationalism is each group has its own society and figures out its own future.

African-Americans can never co-exist with Euro-Americans, just like neither group can co-exist with any others. Someone has to be on top, and everyone else will resent that person and feel that if their fortunes go poorly, it is the fault of that other group. Even with an African-American president, your average citizen finds race an enigma. The white people who want to ignore it figure that with Obama’s election the issue is dead, but for everyone else, the desire is for the topic of race to have new life.

Even if we establish African-American communities in the USA the knowledge remains of the origins of this people here, and that their communities exist by the goodwill of the majority. They will always feel captive, scorned and under threat as a result. In their natural home of Africa, this is not the case, provided they can oust the Chinese and Indians who are currently occupying it with “soft” invasions of a corporate nature.

Every group must be its own master. It cannot do that under diversity. In that situation, it is either master or slave to at least one other group. This is why the best African-American minds of the last century, like Theodor Herzl and other nationalists before them, recognized that the safest and most prosperous path led in escaping the multiculture and reclaiming their continent of origin.

As the cycle picks up momentum again, we realize that it is time for racial separation. Yes, we could do so through warfare, and thus restart the cycle. Or we could opt out of the cycle by separating, exchanging some reparations as goodwill and a token of our hope for their luck, and escape this silly circular problem for once and for all