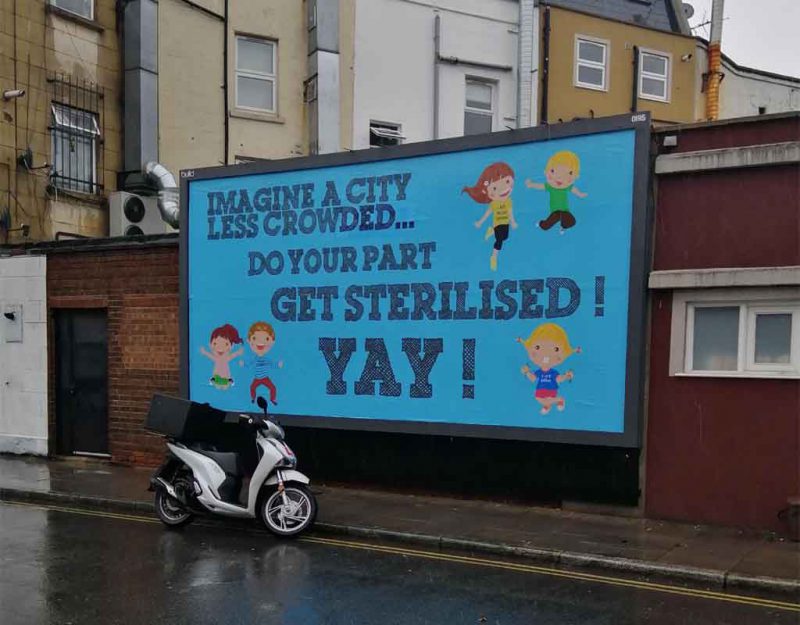 The early twentieth century saw a drastic decline of infant mortality rates among European-descended peoples, which had concerned many for almost a hundred years prior. With rates slashed in half in the United States and Europe, a new baby boom soon followed in the rest of the world and the population saw an increase like never before.

This new change foreshadowed a major problem on the horizon for the third world: the possibility of an overpopulated nation and world, one unchecked by natural methods. China was the first to attempt to deal with this issue head on, alternating between their “one child policy” and “two child policy” to attempt to stifle a looming crisis. This was quickly condemned by a shocked and horrified West as heinous and inhumane.

Still, I wondered what sneaky measures the United States and other Western nations would take to deal with this issue. War? Mass poisonings? The introduction of a new AIDS? As it turns out, I wouldn’t be long before the Guardian would confirm my suspicions:

The greatest impact individuals can have in fighting climate change is to have one fewer child, according to a new study that identifies the most effective ways people can cut their carbon emissions.

“In life, there are many values on which people make decisions and carbon is only one of them,” she added. “I don’t have children, but it is a choice I am considering and discussing with my fiance. Because we care so much about climate change that will certainly be one factor we consider in the decision, but it won’t be the only one.”

Overpopulation has been a controversial factor in the climate change debate, with some pointing out that an American is responsible for forty times the emissions produced by a Bangladeshi and that overconsumption is the crucial issue. The new research comes a day after researchers blamed overpopulation and overconsumption on the “biological annihilation” of wildlife which has started a mass extinction of species on the planet.

And so it was, that all the government had to do was appeal to the hero complex.

You see, most Americans have been saturated with fairy tales and fables. Furthermore, younger generations have nothing to live for: no faith, family, nation, race, or identity to assess their worth. Therefore, these generations are easily susceptible to being radicalized into movements that make them feel like the superheros of their favorite movies and TV shows. Just as Antifa has tricked countless basement dwelling neckbeards into thinking they’re Nazi-punching freedom fighters, the donor class has decisively schemed entire generations into sacrificing their seed to the proverbial Molech of climate change. The hero complex is similar to the “white knight syndrome” that causes men to seek out broken women to try to be their own personal hero and savior.

Like all other cults, leftism preys on the weak and vulnerable by offering a promise of escape from their dire situation. Gutted and drained by the machine that is modernity, those hypnotized by leftism’s charismatic gaze desire nothing more than validation that their hyper-individualistic life has purpose. They want to advocate for causes that leave them feeling like champions of the poor and oppressed, elevating themselves from an impoverished spiritual state. But no matter how much they sacrifice, their cult leaders continue to beat them down with the truths of inequality and injustice. The individualists have oppressiveness in their very skin color, and thus must produce a lifetime of penance and emotional flagellation. They submit, because they have nothing else to tell them they are good and just.

This allows the dark powers and principalities that govern America and other nations to perform the ultimate bait and switch. Get the fertility rates down by convincing the population that having children is a crime against the environment. If the replacement rate starts to veer into dangerous territory, import immigrants from the nations that breed like wild rabbits. This keeps everyone in their lane, and gets everyone devoting their life and flesh to the state as wholly as possible.

Climate change, whether real or not, is a weapon forged in strongest of fires. It immobilizes kings and nations, no matter the cost or destabilization. It rips the unborn from the womb; it devours the lost and the broken. The fear of its might and power lead many to sacrifice parenthood, the one radiant light that could shine upon the doom that is their life in modernity. But a leftist heart, burdened already by a lifetime of guilt, will submit to the yoke of childlessness in a vain attempt to avoid yet another instance of emotional masochism.

If you look hard enough, you’ll find that America does every single horrible thing we’ve been told about other nations and other forms of government. While China reduces their birth rates through open declaration, America does the same thing in secrecy. I knew its invisible hand would find a way to maneuver itself to population control, and the execution was easier than I could have imagined.

Why The Cultural Wave Will Resurrect The West | Pipe Meditations (November 24, 2019)