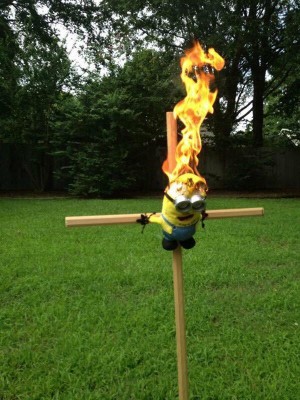 Theyâ€™re everywhere and theyâ€™re infecting the minds of your children. If Pit-Pat, the â€œmagical, pansexual, non-threatening spokesthingâ€, and an Ewok, member of the original species jammed into a movie primarily for merchandising, were genetically spliced together in an unholy ritual while being scanned by the laser from Tron, the result would be minions.

If you donâ€™t know what Iâ€™m talking about, bless your heart and promptly crawl back under the gracious rock that has sustained your innocence. The rest of us have been under constant assault by these bland yellow animated dildos at every turn, being near ubiquitous for their dual role in marketing their films and being materially manifested merchandise. Every time we see one our thoughts drift off into questions of what would happen were they to be bashed against a large rock–would they crack open and release a stale miasma as indistinct as their raceless miscegenated colour, or would they smoosh and ooze out a sickeningly sweet bavarian cream?

If you doubt that their ancestry has been admixed into oblivion, I direct you also to their language, a terminal stage pidgin mashed up from every language on Earth. Itâ€™s the crowd-sourced, more hideous version of Esperanto, and the native tongue of the Last Man. They are fundamentally nothing, without even distinguishable personality. Having achieved equality, they distinguish themselves with superficial decorations and pre-packaged identities they can put on and take off.

These things, these nothings, have no concept of time and live their life as a series of distractions. Because of this, when left to themselves they multiply endlessly and achieve nothing but quantity. Somewhere in the back of the cluster of nerves that processes sensory input into motor control there must be some recognition of this insignificance, as they have an instinctual urge to enslave themselves to any greater force that promises them a share of the spoils of vindictive destruction. In doing so, they abdicate responsibility for their own actions and have something to blame other than themselves when anything goes wrong.

So described, theyâ€™re an excellent metaphor for the useful idiots of the left, first order liberals.

And theyâ€™re everywhere. A sane person today, who recognizes the absurdity of something like â€œgay marriageâ€ is literally surrounded daily by itâ€™s daft cheerleaders, a vanishingly small number of whom have actually given any thought an idea like this, never mind its consequences. They simply follow all the other minions, seeking to serve whatever villain will feed them excuses to solipsistically succumb to their basest desires. What homogenous fetid mixture fills these hollow human-shaped nothings?