Our environment was sacrificed for hollow pretense 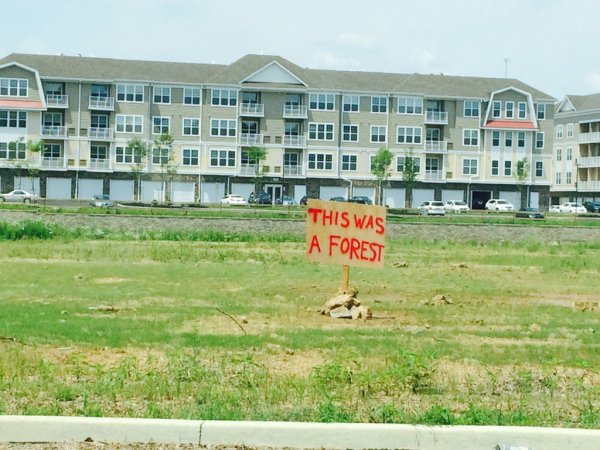 Imagine for a moment that you suffer from electro-hypersensitivity. This is a condition where exposure to the radiation from cell phones and other wireless devices damages your health. There are two different responses you’re likely to face. The first response is “I don’t think that really exists”. The second response is “Well, that sucks, but this new wireless technology we got is awesome, so hopefully they’ll figure something out for you!”

So far, we have seen two responses to the carbon-hypersensitivity condition. Half the population has settled on “I don’t think that really exists”, the other half of the population has settled on “Well, that sucks, but this new wireless technology we got is awesome, so hopefully they’ll figure something out for you by the latter half of the 21st century”!

In all likelihood, life itself won’t go extinct, but that hardly serves as a consolation. After all, if your child suffers a severe peanut allergy, you don’t want the school to agree that “it would suck if your child dies, but we really like peanuts and some other child will take his place and the peanut allergy gene will simply be wiped from the gene pool”.

As a culture, we don’t seem willing to consider the possibility that industrial civilization is not a phenomenon that can be reconciled with the preservation of the biosphere we were born into, because that would turn a technological problem into a test of our moral nature.

Instead, what limited time we have to prevent catastrophe we spend grasping at straws. We waste resources on non-solutions. The IPCC refers to the burning of peat as “slow-renewable”, because, so the logic goes, a few hundred years after its destruction in a power plant helped end the Holocene, the peat could theoretically have reformed.

Even the solar panels, precious darlings of the modern greens, are effectively a non-solution. As low tech magazine explained, solar panels are installed above their sustainable rate, which means that in the near term, the energy transition actually increases emissions. Car manufacturers have moved over to simply lying about the energy-efficiency of their vehicles.

I’m not the type of person who suggests that if you write enough columns and comments on the Internet, show up to a protest, or make a really impressive documentary, you’re going to change the course of civilization. Rather, the value in observing the ongoing crisis lies in its ability to reveal to us our moral failure.

The Earth died, because at some point we decided that we should be able to have everything we want and decided to consistently pursue that path. Not every culture does that, in fact, most healthy cultures are riddled with seemingly arbitrary taboos, that to us appear as little more than bigotry and arbitrary constraints on our freedom.

Many hunter-gatherers prohibit meat to young fertile women, ensuring that their body fat remains too low to have children. In the West, such arbitrary constraints of human freedon would likely be decried as #sexism, thereby leading to population growth, eventually making their lifestyle unsustainable and finally forcing them, excuse me, giving them the “right” to join the ranks of social media specialists and help desk technicians, who believe themselves to be free but can be reduced to beggars on the street if any of their racist jokes on the internet happens to offend anyone.

Western society is now based on the notion that everyone should be free to do what they want save engaging in violence, which we define as any non-state sanctioned form of physical aggression against other individuals. Society turns into mediocrity as a result. A punch against your head can generally be recovered from, while the fact that you can never be alone or experience silence is a lifelong burden we try not to notice.

There are two moral failures here that characterize Western civilization. The first failure is our failure to say no to ourselves, both as individuals and as a society. We believe that we deserve everything. Restricting gluttony does not per definition necessitate self-castigation, in fact our lives would be better if we restricted our gluttony. Our greed has imprisoned us in a form of hyperreality, where we experience only synthetic substitutes for authentic experiences. Candy instead of fruit, zoos instead of forests, texting instead of conversation.

As an example, consider an XKCD comic from a while ago. “Technology’s going to be so cool. All in all, the future will be okay! Except climate; we fucked that one up.” Is what it argued. This represents an implicit form of denial more malignant than anything you will hear from Joe Sixpack. It’s important, because it’s representative of our general response as a culture to the problem we face.

This might seem like an unjustified caricature of our society’s response to the catastrophe, but it is the only conclusion we can draw. Technological progress isn’t going to help us all move to Mars or any of the other ridiculous scenarios some people propose. Even if it did, we’d face largely similar lives there that we face here, except for our further isolation from nature.

Humans need to be entertained and their favorite method of entertaining themselves has proven to be staring at screens. Thus, the consequence is that if left free to do what we want but unable to violate the laws of physics, we pursue hyperreality further until we find ourselves having sex with virtual reality anime sex-bots.

The second moral failure our society has endorsed is failure to say no to others. This is a form of laziness, where we avoid hardship and instead choose the easy solution that delays catastrophe. We declare that it’s perfectly acceptable that people have eighteen children, motivated by some iron age myths they reinterpreted for themselves.

Simple calculations by ecological economists demonstrate that we can not afford for the third world to pursue the standard of living that we in the Western world now enjoy, instead, our standard of living will have to be reduced to theirs. We’re unwilling to say this to them, for fear of being accused of racism. As Paul Watson noted: “Today [the accusation of] racism, cultural rights, and the right to exploit nature for commercial gain are the weapons used to defend gross over-exploitation of species and the destruction of natural habitats.”

Our entire society is pervaded by a fear of any kind of conflict that might lead us to be seen as intrinsically bad people. Our most vulnerable and precious beings are the victims of our moral failure. If the example of climate change is becoming tiresome, just consider the girls in Rotherham, who were gangraped by Pakistani pedophiles because those tasked with protecting them were afraid of being accused of racism. The correct virtuous response there would have been to do what is necessary, even if five hundred years from now, your name is still used as a synonym for racism.

For another example, consider Prince Bernhard, who we now know sold his family paintings to set up a program to hunt down poachers and kill them, in an effort to prevent the extinction of the Rhinoceros. This program required cooperation with the South African apartheid government, which mainstream conservationists were unwilling to do, for fear of tarnishing their name. Future generations won’t care if you were called a racist and hated by your own contemporaries or not, they’ll care if there are any megafauna left.

The world we are creating is a mediocre one, born from the accumulated totality of our moral failures. It’s a world without forests, where anywhere up to nine billion people with an average IQ of around 85 will spend their days twerking, until we are all finally wiped away by the forces of nature like a mediocre Etch A Sketch drawing.

European blood is not exhausted. | Minions are Everywhere