The true face of diversity 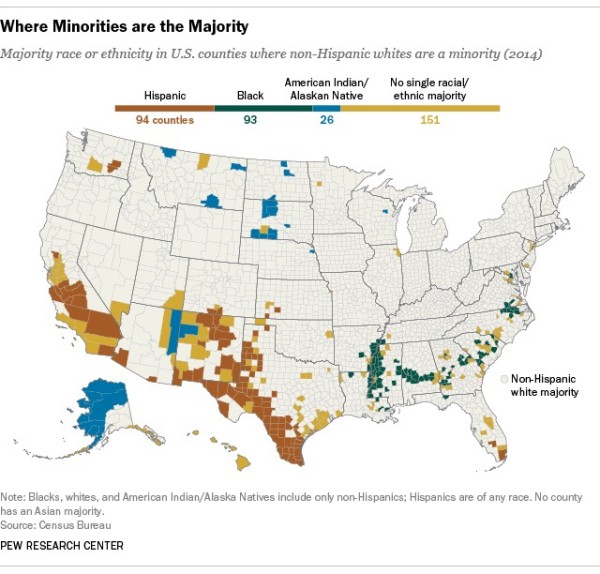 I seem to take flak from a number of people because instead of targeting specific groups, I target mental processes. In particular, I identity the process of “egalitarianism” or equality — which is the basis and uniting force behind all liberal belief systems — as the root of our downfall, and a subset of it called internationalism (or diversity, or multiculturalism) as the root of our problem. The enemy is not Jews, or Blacks, or the Rich; it is a breakdown in social order.

The above map confirms my approach. Some areas have become majority Hispanic or majority Black, but the interesting data comes in the “no clear majority” category: all of the major cities seem to fit within this category. That means that African, Asian, Caucasian and various hybrids outnumber any clear group. As I have said for years, this is the future. The forces in power will replace the indigenous WASP population with a mixed-heritage “grey race” that has no culture, ethnicity or values system to fall back on, and instead will get those entirely in the form of ideology passed on by government. These people will be perfect consumers because they will lack things they need, like purpose and a framework for guidance such as what culture provides, and so will like California New Agers cast around for “new” ideas and lifestyle additions constantly. This means they will buy lifestyle-oriented products constantly, as well as products to assuage their anomic misery and ennui, trying to use external forces to replace what must be internal, which is a sense of something sacred toward which life must be pointed. They will always vote leftist, having nothing from the past to defend as is a pre-requisite for conservatism, and will tend to be obedient because of their indoctrination. This is what happens when government becomes a parasitic force and acts not for the good of its citizens, but for the good of itself — and the elites who command it — at their expense.

I waste no time with minority crime statistics and other data which attempt to indicate that the problem with having minorities among us is their behavior. No: the problem of diversity is that it destroys our shared purpose and reduces society to mechanical obedience, leaving behind a mixed-race population like we see in the places where former great empires failed. This is the endgame of diversity, which is total destruction of anything but the obedient at the hands of incompetent Communist-style leaders, and then when society collapses, the deposit of a mediocre population living in perpetual kleptocracy. Diversity itself is the problem, and any surrogate for that is a scapegoat and a mission doomed to fail.

Minions are Everywhere | “Your rights end where my rights begin.”