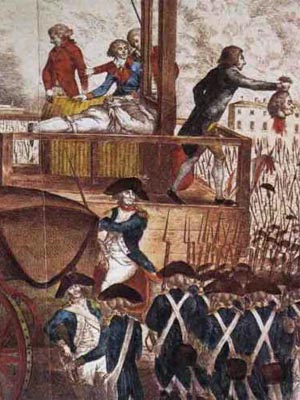 1991 was a turning point for the West: communism failed, and this forced the West to consolidate its rebels and bourgeois together into a new genre. Made of baby boomers, this “bohemian bourgeois” combined 1968 pseudo-Marxist values with pure New World consumerism.

These raging delusional cases finally got their liberal dream through Bill Clinton, and then Barack Obama, interrupted only by conservatives who attempted to reverse the decline. This culminated an effort that began in 1789 or earlier to make everyone equal.

Claiming that a radical difference exists between Communism, Socialism, anarchism and your standard liberal democrat is fallacious. The only difference is that of degree. Anarchism is the ideal, but that doesn’t work, so liberals switch to a strong central bureaucracy to enforce that anarchy.

Liberalism has been gaining influence since before 1789 because it is a popular notion. If you think only of the individual and its rights, there is never blame for individual failings and everyone is happy. This outlook is most compatible with commerce, socialization and marketing.

The proles of the world love liberalism because it tells them it’s not their fault that they have failings in life; someone else (presumably the rich, fascists, white people or aliens) did it to them. Cognitive dissonance is what psychologists call this, but not if they want to keep their jobs.

Now that we have had 200+ years of liberalism rising, we are starting to see the consequences of its unrealistic policies. Namely, our social order has collapsed and the result is worse than what came before. And we sacrificed it all for the notion that all people are equal.

Common sense and even more, basic experience, shows us that “all people are equal” is a delusional, dysfunctional and unrealistic feeling and fashion but not a complete logical thought. It is popular among the broadest section of individuals; these also like Katy Perry records and Big Macs.

Fewer than one in ten thousand people is competent enough to be a brain surgeon, military general or brilliant innovator; leadership is even harder than those jobs, and yet we let everyone make the decisions (votes) that constitute our ersatz leadership.

Yet a certain segment of the population keeps babbling on about equality and the individual and human rights as if these things were still relevant. They aren’t. Liberalism is now the old order, and one that has failed, as it has wrecked families, nations, and all things we relied upon.

Take our Prime Minister, who is once again defrauding far too many people. He uses his expensive voice, his expensive clothes, his well-learned tone of public-school command, to give the impression of being an effective and decisive person. But it is all false. He has no real idea of what to do. He thinks the actual solutions to the problem are â€˜fascistâ€™. Deep down, he still wants to â€˜understandâ€™ the hoodies.

Say to him that naughty children should be smacked at home and caned in school, that the police (and responsible adults) should be free to wallop louts and vandals caught in the act, that the police should return to preventive foot patrols, that prisons should be austere places of hard work, plain food and discipline without TV sets or semi-licit drugs, and that wrongdoers should be sent to them when they first take to crime, not when they are already habitual crooks, and he will throw up his well-tailored arms in horror at your barbarity.

Say to him that divorce should be made very difficult and that the state should be energetically in favour of stable, married families with fathers (and cease forthwith to subsidise families without fathers) and he will smirk patronisingly and regard you as a pitiable lunatic.

Say to him that mass immigration should be stopped and reversed, and that those who refuse any of the huge number of jobs which are then available should be denied benefits of any kind, and he will gibber in shock.

Yet he is ready to authorise the use of water cannon and plastic bullets on our streets (quite useless, as it happens, against this sort of outbreak) as if we were a Third World despotism. – The Daily Mail

Since 1789, leftists have been fighting to bury their misdeeds under the rug. They “intend” well, but the results are never so good. Whether it was the mass slaughter of French people upon hearsay in the French revolution, the vast purges of Soviet Russia, or the ongoing failure of leftist programs in the US and UK, liberals are trying to hide these consequences.

Liberalism and leftism are the same thing, and part of their goal is to deny consequences so that the individual has maximum freedom and equality.

However, doubts spread. We’ve been on on this increasing equality jihad since at least WWII, and the crusade for universal freedom and equality has run into a stopping point — the actual inequality of people. The leftist answer is that we can “educate” (propagandize) them with central authority.

However, nature matters more than our fond notions of what propaganda can do. From a recent update:

A landmark article went online a few days ago in the journal Molecular Psychiatry. The study was prepared by a team of 32 researchers headed by the University of Edinburghâ€™s Gail Davies and entitled â€œGenome-wide association studies establish that human intelligence is highly heritable and polygenic.â€ The studyâ€™s methods do not lend themselves to easy explanation unless youâ€™re at home with SNPs (single nucleotide polymorphisms) and inverse variance weighted models used to capture â€œthe variance in the trait that is due to linkage disequilibrium between genotyped SNPs and unknown causal variants.â€ But the bottom line of the article is reasonably simple. Using nothing but genetic information, the team of researchers was able to establish that the narrow heritability of crystallized intelligence (the kind that can be more easily affected by education) is at least 40 percent. The narrow heritability of fluid intelligence (the kind that involves pure problem-solving ability, independently of acquired knowledge) is at least 51 percent. Note the at least. The studyâ€™s authors explicitly state that these estimates are lower bounds.

Shelves of books and articles denying or minimizing the heritability of IQ have suddenly become obsolete. – The American

As that writer doubtless knows, this is a problem for leftists, because it disproves equality. If intelligence is mostly heritable, education is irrelevant — people either have the ability to process the information, or not. You cannot educate into someone a series of ideas they lack the biological capacity to understand.

As Stephen Pinker wrote in The Blank Slate: The Modern Denial of Human Nature, modernism (a form of liberalism) denies that we are inequal. Instead, it believes that we are equal beings who just await the right programming to be made into perfect citizens. However, biology is far more complex, but a general capacity for processing (called g for “general intelligence”) determines not only what we can understand, but what jobs we are capable of doing and how competent we will be at them.

G even correlates highly with health. It’s almost like an evolution index, which since intelligence is most of what separates us from our simian ancestors it most likely is. The changes in our physiology probably occurred after our intelligence rose, and enabled us to evolve further.

In fact, scientists are discovering a lot about the brain, especially what makes people with higher intelligence radically different:

Hereâ€™s an interesting fact: Smart people have faster impulses in the brain than less intelligent people. Thatâ€™s all according to one Cambridge professor by the name of Ed Bullmore. But as far as getting any smarter, tough luck. British scientists made a convincing case for why our brains have reached full capacity: Human brains would consume too much energy.

Simon Laughlin, professor of neurobiology, at Cambridge University told The Sunday Times: â€˜We have demonstrated that brains must consume energy to function and that these requirements are sufficiently demanding to limit our performance and determine design.â€

Also, in the The Sunday Times story, the researchers say thereâ€™s a link between how connected different brain areas are and IQ. However, there isnâ€™t enough energy to keep up with any increase in brain power. – SmartPlanet

The brain is wired to move faster and with greater complexity in smarter people.

No matter what they preach about equality, we will always want smart leaders and professionals. Who do you want doing your open-heart surgery, or taxes, or defending you in court — the 100 IQ “equal person” or someone with an IQ of 120 or above?

Go ahead, tell us why you want the equal low-IQ type. That’s propaganda too and most people will obediently bleat out the equality doctrine: it doesn’t matter as long as he works hard, if he’s nice it’s OK, the judge will understand, etc. But in real life they’d pick the smarter candidate every time.

Liberalism/leftism is failing for two reasons: (a) its policies are not succeeding despite trillions of dollars and relentless effort because its founding idea of equality is an insane notion and (b) science, experience, history and common sense show that liberalism has negative consequences.

Like a new dawn, people are gaining the emotional strength to bear social disapproval and criticize liberalism.

This reminds me of the early years after the Carter presidency (Carter is an example of how liberalism turns honorable men into popularity-whoring nitwits). People were so brainwashed into the warm-fuzzy, happy-feelings, compassionate-pacifism of those years it took them months or years to shake free.

When they did however, they found that conservatism offered something different — a whole society. Instead of a lot of dogma to explain away failures, there were practical and straight-forward plans for not only fixing problems, but rising above them.

Across the globe, favored populations with higher IQs are starting to snap out of their socially-induced stupor and notice that liberalism has failed, despite for too long holding the competent but few in the thrall of the incompetent but numerous.