Leftist Terror Is The Norm, Not An Exception 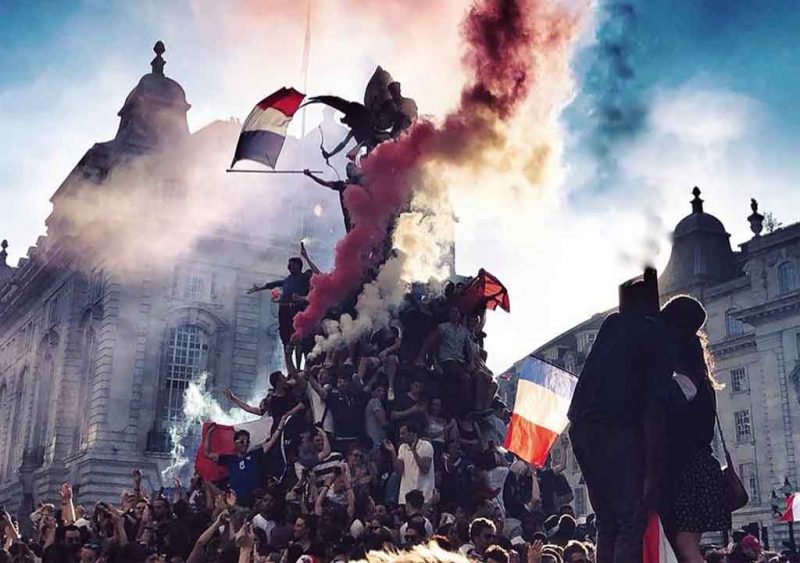 Modern society gives us the feeling of “waking up” and realizing that things were not as described because the strategy of those who manipulate us is to change the meaning of words, while knowing that we are relying on the older meaning. They say “freedom” and mean class warfare, or use the term “justice” to mean subsidies and relativistic treatment.

This fits with the origins of Leftism in the interaction between shopkeeper and plebeian. The shopkeeper makes promises about a product, and the prole becomes intoxicated by those images and buys the product. Their thinking runs backward: instead of figuring out what they need, they encounter something that seems to fit and pursue it instead.

Leftism arose from this relationship, which people felt was easier than having social hierarchy and goals, so they overthrew their kings, culture, customs, and religions and replaced them with mass interaction of this nature. That process continues today with Leftist parties in the West, who want to replace civilization with government benefits and consumerism.

With the confirmation of Brett Kavanaugh, many people saw the Left finally reveal itself as the totalitarian pathology that it is. It starts simply, with wanting equality under the law, which means that a criminal has the same rights as his victims. It expands from that to political equality, including feminism and diversity. Finally, unstable, it requires totalitarianism to keep from imploding, and even then it collapses inward.

For now, the Left in the West is holding at the stage of socialism plus consumerism. They like money, but they want to tax and spend until the middle class is gone and a few super-wealthy rule over a mass of impoverished people made obedient by that condition. Then, they reason, Utopia will have arrived.

Everyone who wants equality, it seems, wants to be “more equal” because they think they know better. They believe that equality not existing in nature is an accident, and that they can fix what is more complex and enduring than anything human. Most of all, however, they see that society is rats in a cage and they want to be the rats on top, and if that requires conning everyone else by telling them that they are “equal” when that is a meaningless term, so be it. You have to break some eggs to make an omelette.

Hillary Clinton serves cheerleader for the latest group that the Left hopes will vault them to victory, the single woman. Sexual liberation made mating into a market, and the ones who win get in early and pair up to have happy families. Everyone else rotates through boyfriends and girlfriends and ends up alone and miserable.

Leftists tap into that misery like they tap into other forms (poverty, powerlessness, anger, resentment). Clinton knows her audience will support her when she talks about “a vast right-wing conspiracy” or “a basket of deplorables” because they are as angry and unfilfilled as she is. Now, Clinton has commanded her audience to take their final form:

“You cannot be civil with a political party that wants to destroy what you stand for, what you care about,” Clinton told CNN’s Christiane Amanpour. “That’s why I believe, if we are fortunate enough to win back the House and or the Senate, that’s when civility can start again.”

In other words, Leftists are either in control and everything is good, or they are at war for control and must subjugate everyone else. Republicans, take note: “bipartisanship” is merely the injection of a paralyzing venom so that the Leftist spider can lay its eggs in you and have its offspring eat you as you suffer without being able to move a muscle or cry out.

Even more, she has revealed the polar state of egalitarianism. Conservatives see the world as a complex place that requires heterogeneous solutions; Leftists see the world as either “equal” or bad. Things that are not dedicated to equality must be destroyed and replaced by things that are dedicated to equality. There is no middle ground, for Leftists.

They start out slowly, simply demanding tolerance; as time goes on and they are more numerous, they demand subsidies; finally, when opposition rises at the same time Leftist programs reveal their reality-denial that invariably leads to bad results, they insist on control so that they can avoid being deposed for their failure.

Clinton has called for Leftists to mobilize into this final militant state. She realizes that diversity has not just replaced Republicans, but displaced white Leftists who will shortly be cut out from the political system. The Left has only a few years to act in order to gain total control.

In this way, Clinton is merely fulfilling the terms of the great victory of 1968. In that year, Leftists decided that they could take over by seizing control of culture, brainwashing the inert electorate, and then fundamentally transforming society so that it could never go back to what it was before Leftism. Then, they thought, permanent Leftism would ensue.

They are finding out now that they have been chasing symbols and not realities the whole time. Diversity does not create Utopia, but a society with no center in which disunity is the only common denominator; the benefits state creates impotent and miserable people; equality itself produces endless infighting instead of peace. All that remains is power itself.

As we awaken to this reality, many have forgotten that this sort of behavior is not new for the Left; in fact, it is old as the Left itself. That unpleasant truth reared its head only a few years ago when a video game showed the French Revolution as it was, albeit slightly dramatized:

The latest in the popular Assassin’s Creed series of video games presents the French revolutionary leader as a blood-thirsty psychopath. He was, after all, directly or indirectly responsible for more than 40,000 executions in 11 months during the “Terror” of 1793-94.

Cue apoplectic fury on the French hard left, which reveres Robespierre as a “man of the people” and a “father of democracy”.

…His arguments for the absolutism of the people’s rights presaged Stalinism or Maoism. “If virtue be the spring of a popular government in times of peace, the spring of that government during a revolution is virtue combined with terror: virtue, without which terror is destructive; terror, without which virtue is impotent. Terror is… then an emanation of virtue… The government in a revolution is the despotism of liberty against tyranny.”

In other words, Leftism is a continuum from the demands for “equality” of the French Revolution all the way through Stalin, and the degree of its intensity depends on how much power that Leftists have. A Leftist with minimal power is a hippie; a Leftist with full power is a Communist dictator picking up his red phone to hear the tortures in the basement far below.

Look how quickly America was transformed under Bill Clinton and Barack Obama. They sought to make permanent changes, not bipartisan compromises, even if they disguised the former as the latter. They wanted to end anything but rule by people following the same symbolic goals that they had, and they were willing to destroy anything and anyone who failed to conform.

Robespierre shows us the tragedy of Leftists. His mind full of ideas, and his heart full of good intentions, he concluded that history was wholly an error and that the new humanistic ideas of The Enlightenment™ could do much better. He did not realize that he was chasing empty symbols that referred not to concrete notions, but ever-expanding ones, since “equality” is not a end goal but a method pursued as a goal. Eventually, he became a monster as he saw how much he would have to control, manipulate, and murder people in order to make his fantasy come true.

Leftists sidestep the question of planning for our future by instead relying on concepts of good and evil. For them, humanity is good, and nature is bad because it threatens us, so the solution is to create a human-only order in which what humans desire comes before all else. This order, called utilitarianism, presupposes that good can be achieved by removing evil alone. It identifies inequality as evil, and thinks that when the inequality is vanquished, a goodness will emerge from humanity.

More realistic thinkers see good not as a state or a method, but a direction, even a vector. Good cannot be achieved by beating evil, but by actively pursuing good; however, this happens within the innermost chambers of the human heart, and so cannot be achieved through external force. All that one can do is take those who are predisposed toward seeking good and give them power so that they can inspire others to follow.

To be good requires affirmative acts, not destruction of enemies, and so it is not accessible to the masses, but that inherently denies egalitarian thinking, so Leftists instead operate on a mentality of purging the bad and assuming that everything else is good, which denies the reality that we need a sense of purpose that includes good in order to achieve anything like that state.

The negative nature of Leftism — a desire to eradicate evils, such as inequality, instead of creating good — guarantees that it will become more insular and extremist as time goes on. Since 1789, when it began taking over the West, it has brought us nothing but wars for democracy, social programs we cannot afford, eroded social order, and internal division.

Expect Leftists to get more extreme as their grasp on power lessens because, after two centuries of correctly implemented Leftist programs failing due to being anti-realistic, people are losing faith in Leftism. Right now, the West is increasingly anti-liberal, but this does not mean conservative, only that ordinary folks are fleeing the ideology of the regime that rules us.

Our most sensible response comes not through meeting violence with violence, but by furthering this pulling away. Our goal cannot be “bipartisanship,” but instead the rejection of bad ideas, and instead of settling with that, we must look toward the ideas we know that are proven to lead to good for Western Civilization as a whole.

Why White Nationalism Has Become Obsolete | Has The Alt-Right Failed?