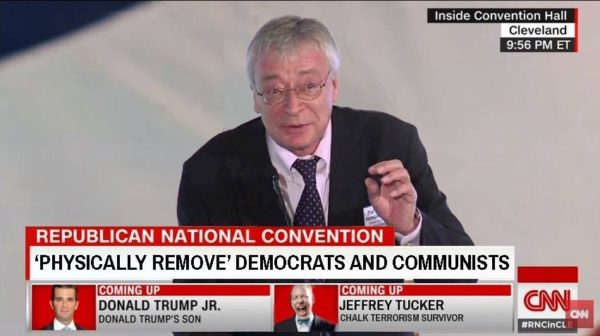 In the usual neurotic and under-developed way that Leftists agitate, Leftists are now hinting that a coup may be needed if Trump is elected president. They hope to scare us and drive us away from the polls through their usual tactic, which is threatening to set everything on fire if they do not get their way.

Irate (not enough juice or nap) three-year-olds worldwide approve of this tactic.

The Los Angeles Times, always a hesitant apologist for the liberal insanity that provides its city’s industry its largest audience, ran an op-ed by Cathedralist James Kirchick insinuating that a coup is needed:

â€œI would be incredibly concerned if a President Trump governed in a way that was consistent with the language that candidate Trump expressed during the campaign,â€ retired Air Force Gen. Michael Hayden, who served as head of the CIA and the National Security Agency under President George W. Bush, said in response to Trumpâ€™s autocratic ruminations. Asked by TV host Bill Maher what would happen if Trump told American soldiers to kill the families of terrorists, as he has promised to do, Hayden replied, â€œIf he were to order that once in government, the American armed forces would refuse to act.â€

â€œYou are required not to follow an unlawful order,â€ Hayden added. â€œThat would be in violation of all the international laws of armed conflict.â€

…Trump is not only patently unfit to be president, but a danger to America and the world. Voters must stop him before the military has to.

Possibly he is suggesting that our military are as dishonest as Leftists, and therefore after having refused to follow an order they interpreted as illegal, they would revolt and overthrow Trump in order to avoid facing the career consequences of that idea. This assertion is nonsense as we see following the damage Obama has done to many military careers.

The right generally avoids coups if it can because they are so destabilizing and lead to an artificial narrative, which is not a natural process but an imposition of human conjectural thinking like any other control mechanism. Coups are a change in quantity, not quality.

However, the right has traditionally emphasized hierarchy, or the thought that people are ranked by ability and having each rank serve its role benefits all. This translates into two other ideas: first, people are not equal, so some should have responsibilities and privileges above others. Second, not everyone needs to be included.

From this we see the two Rightist approaches to Leftist insanity: disenfranchise those incapable of making decisions, through not only political means but social and economic ones, by giving them lower caste-rank. And, for extreme cases, dis-include them through a method known as exile or the physical removal of them from among us.

We must face the obvious: egalitarianism and non-third-world society are incompatible.

Leftists want egalitarianism, or no hierarchy (except money and social popularity) and universal inclusion, or everyone is welcome. This jives with the low self-confidence of the neurotic individual, and merchant-level commerce, which wants as many warm stupid bodies as it can cram in the door.

Merchant-level commerce is generally destroyed by capitalism itself, which creates more efficient engines than little stores and chains and products for idiots, but capitalism can be hobbled by a social welfare system as in the US and EU which distributes money to the clueless in order to make them an important demographic for marketers.

Those of us who want better than third-world levels of dysfunction tend to seek a society that is, well, reactionary. Reactionaries want a society structured around the four pillars or something like them, because that way, civilization rises above merely reacting to its own self-referential drama, and becomes great in the way the Greeks and Romans were.

We are realizing now that the question of Leftism is a path. Any step on the Leftist path leads to full Communism, and after that, to being Venezuela: a mixed-race, mixed-class state with no ability to produce anything, thus no future but increasing poverty and government power.

Those who want Leftism and those who want Rightism are on entirely different paths. They cannot exist in the same society. Rightists acknowledge this; Leftists simply want to stage coups and enjoy oppressing Rightists.

This leads to unfortunate results, such as the physical removal of neurotics — err, Leftists — by the Pinochet government:

Itâ€™s known that Pinochetâ€™s soldiers took their victims out over the ocean in helicopters and dropped them into the sea in burlap bags, weighed down with bits of railroad track. Itâ€™s known some were burned, and some were buried in unmarked mass graves. But the families of the disappeared, most often, never know what happened at all, and never even know for sure their loved ones are dead. And now we learn some of their corpses were blown to smithereens with dynamite.

We can avoid this unfortunate result by admitting that there needs to be a great American divorce. In this divorce, Leftists go to the 95% of the world which is Leftist, namely the third world. We can ship them via boat to Brazil or Africa, send them over the border into Mexico, or give them permanent vacations in sunny Guatemala or Vietnam.

They will love it. These places are vibrant, diverse and full of life. The people there love to dance and sing and take life not so seriously, which is exactly what the neurotics have been telling us to do for the past couple centuries. Oh, and there is plenty of ethnic food and vivid folk culture. Perfect!

In fact, this situation is win/win. The Left is spared having to live under Trump, and we are spared the slow road to Communism and subsistence living that the Left imposes whenever given a chance. Perhaps the real coup is not against a group at all, but against the idea that both groups can “co-exist.”