Leftism is One Manifestation of a Mental Health Issue 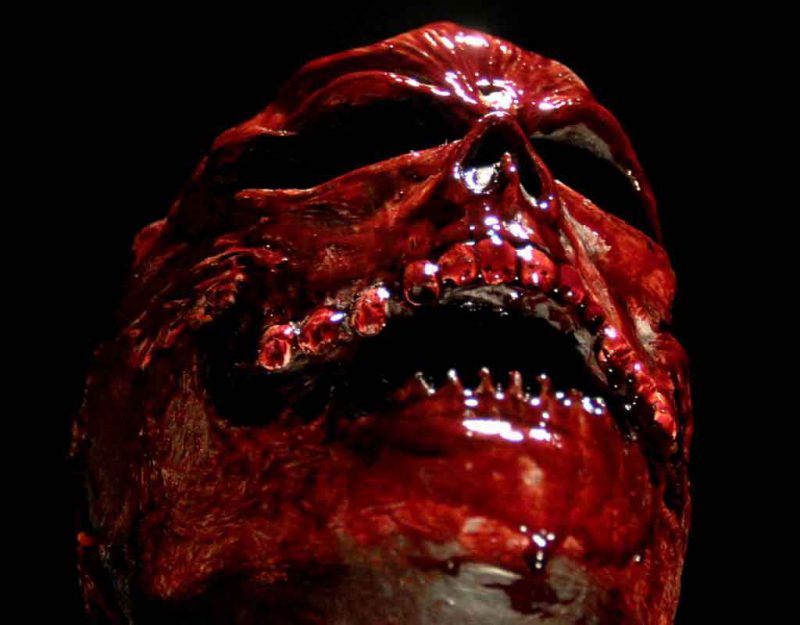 Egalitarianism behaves like a cult and seems to alter the mental state of its members, repurposing what might have merely been neurosis, superstition, and narcissism into a weaponized doctrinaire and intolerant outlook.

Conjectural belief systems tend to be of this nature. Without clear proof of their function or necessity in reality, they are optional and therefore unstable, which makes them pre-emptively defensive, essentially clearing doubters out of the way so cult members can be confident.

Increasing data points suggest that Leftism may in fact correlate with mental disorders if not mutate mild disorders into full-blown illness, since cult members rely on the answers that Leftism gives as pillars of their worldview and justification of their life choices.

The recent interest in this issue kicked off with a Pew Research survey about the mental health of Americans, as analyzed by Zach Goldberg: 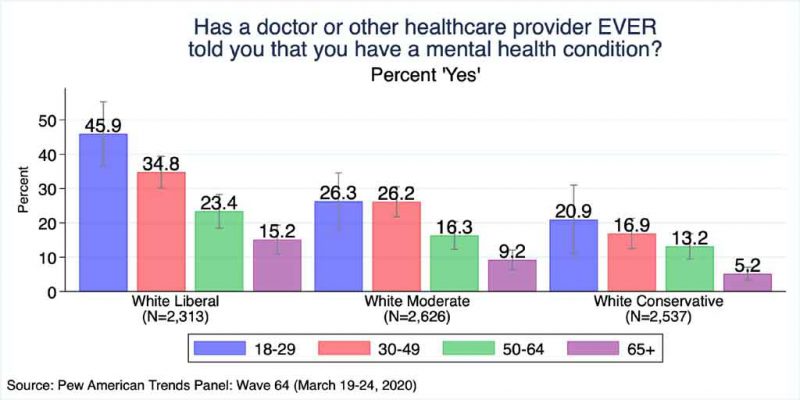 Temporal analysis showed that the relationship between mental illness, happiness, and political ideology has existed in the GSS data since the 1970s and still existed in the 2010s. Within-study meta-analysis of all the results found that extreme liberals had a 150% increased rate of mental illness compared to moderates. 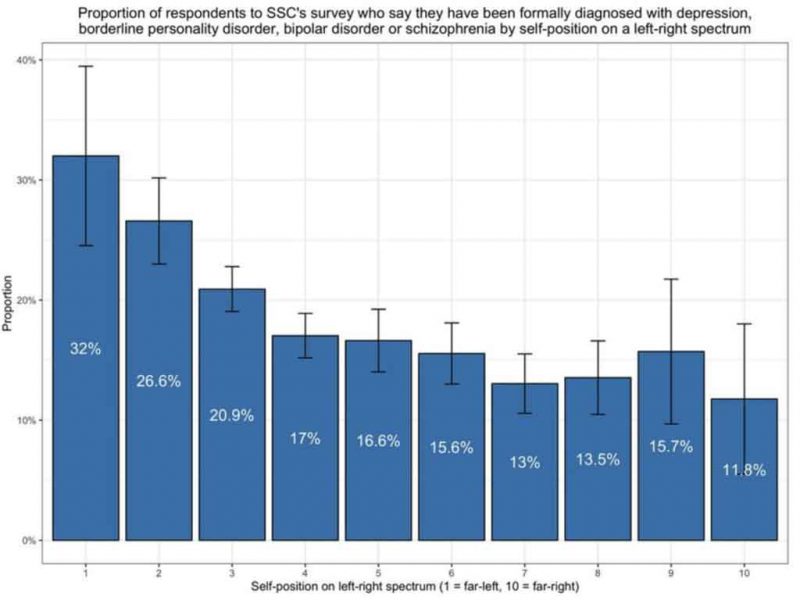 Some think that Leftism simply represents a revolt against biological adaptation, and that egalitarianism is anti-Darwinist at its core because it appeals to those who fear that they are evolutionarily unfit.

Others have pointed out that conservatives tend to posses a dark realism that resembles what we would expect from organisms in nature:

The Dark Triad traits (Paulhus & Williams, 2002) are characterizedby entitlement, superiority, dominance (i.e., narcissism), glib social charm, manipulativeness (i.e., Machiavellianism), and callous social attitudes, impulsivity, and interpersonal antagonism (i.e.,psychopathy). Prior research has reliably highlighted the ‘‘dark’’ side of these traits including limited empathy (Jonason, Lyons,Bethell, & Ross, 2013c), social dominance (Jones, 2013), heightenedviolence (Jones & Paulhus, 2010), and racism (Hodson, Hogg, &MacInnis, 2009; Jones, 2013). Political conservatives tend to adopt a ‘‘colder’’ and less sensitive approach to deal with others in asmuch as they are opposed to social welfare and other ventures to help the needy. Antisocial personality traits might be part of the correlates that enable this kind of political disposition.

This is written from a Leftist perspective which assumes that deferring to social opinion, instead of natural order needs like hierarchy and realism, represents a positive behavior, while realism (“Machiavellianism”) and self-interest (“narcissism”) are negative. Most likely, they have over-characterized these behaviors as something darker than they are out of bias.

If conservatism is a dark realism that emphasizes hierarchy, order, reality, and the need to adapt and improve in order to be sufficient, then Leftism is a form of pacifism: accepting those who are less strong and sane in order to keep the group together, albeit at the cost of quality.

As demonstrated by recent research this evolutionary history of politicscontinues to shape how modern individuals behave in modern mass politics andprompt people to derive their political attitudes from ancestrally relevant factors such as upper-body strength and short-term fluctuations in hunger.

Those who can assert themselves and succeed have no need for egalitarianism; those who fear that they cannot depend on egalitarianism, and seek to form an army of the little people to tear down the naturally gifted lest those superiors oppress the rest of them.

Since beauty correlates generally with health and intelligence (although some notable exceptions apply) it serves as a good proxy for overall ability to compete and therefore, achieve what one needs without egalitarianism.

It turns out that people who feel more attractive drift away from Leftism:

“Construe inequality in terms of contextual causes” means blaming the environment and socioeconomic background of people for their actions, instead of seeing them as inherently less competent like determinist and realist schools of thought do.

It turns out that conservatives, by seeing external order as a good think and seeking to adapt to it instead of using it as a scapegoat, achieve greater mental health than Leftists, who see a negative world where nothing will turn out well:

In contrast, a predominant social psychological explanation of the gap is that conservatives, who are described as fearful, defensive, and low in self-esteem, will rationalize away social inequalities in order to justify the status quo (system justification). In four studies, conservatives expressed greater personal agency (e.g., personal control, responsibility), more positive outlook (e.g., optimism, self-worth), more transcendent moral beliefs (e.g., greater religiosity, greater moral clarity, less tolerance of transgressions), and a generalized belief in fairness, and these differences accounted for the happiness gap.

According to some researchers, this involves the locus of control, with conservatives accepting reality and seeing everything else as up to them, but Leftists attempting to alter reality and then seeing their role as static:

In other words, conservatives argue from Darwinism: we are each organisms who must adapt to our environment. Leftists argue from social reasoning, which says that since we are all the same type of organisms, we must support each other in order to defeat Darwinism.

Using religiosity as a proxy for a positive belief in the world, some researchers have found that it is likely that Leftists carry high mutational load:

We examine associations between these deviations and four indicators of mutational load: (1) poor general health, (2) autism, (3) fluctuating asymmetry, and (4) left-handedness. A systematic literature review combined with primary research on handedness demonstrates that atheism and/or paranormal belief is associated with all of these indicators of high mutational load.

People with high health, mental health, and low mutational load tend to accept nature and reality as good, and see social influences as more of a parasite that impedes the ability of the exceptional to get stuff done.

On the other hand, those who are unwell and mentally unwell would rather force equality upon the population so that the unwell benefit as much as the well. This is a pre-emptively defensive position designed to force acceptance of the Darwinian failures of our society.

Bringing this back to the externalization thesis, it shows that people who are comfortable in the world see no need for an external control on their behavior through human social influence; they respond to reality (realism) and know how to succeed within it.

On the other hand, people who fear nature because they are likely to lose out in a Darwinian struggle are attempting to control nature through human social pressures, and by doing so, to end natural selection since they lose out at that game.

In effect, they replace reality and nature with human social pressures, knowing that when subjected to social pressure alone, most people opt for a duality of appeasement of the weaker and fewer rules that might impede the stronger. This causes the “liberalization” of standards.

As you have read on this site many times before, Leftism and Rightism can be understood as opposite psychologies:

Through a massive propaganda effort, the Left has almost totally subverted the Right, most of whom will argue for Enlightenment/Libertarian notions like individualism, anarchy, and equal treatment but then tack it all together with vague woo about gods or free markets.

On the other hand, for the Left, survival depends on overthrowing order, including Darwinism or the choice of the competent over the incompetent, since without equality to ensure that incompetents are accepted as well as competents, Leftists would not exist.

Why The Government Lies About Inflation | Make Humans Great Again