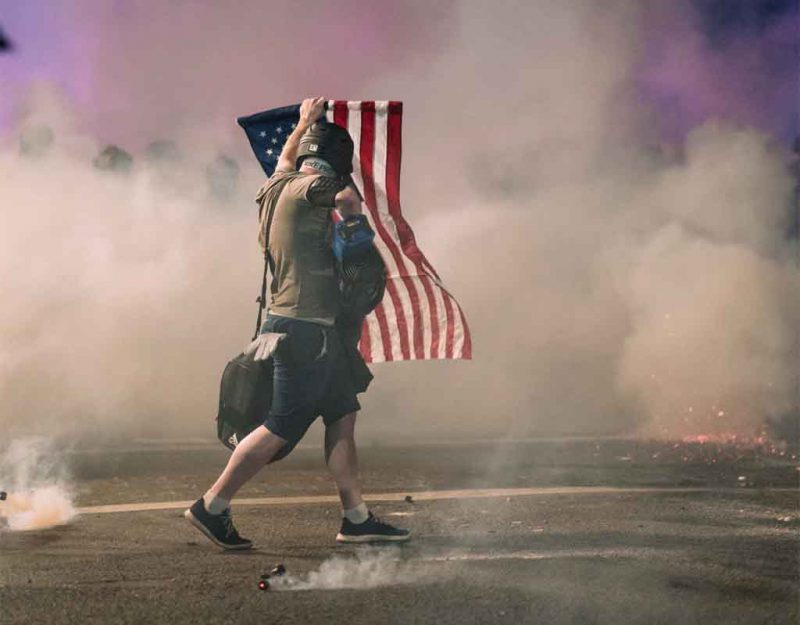 Democracy produces no shortage of prophecies of doom. Famously vice president Al Gore declared that climate change would destroy us by this year, but it did not happen. Even COVID-19 seems to be a “fake disaster.”

We face a real existential threat, but only one man speaks of it, which is why he has become the enduring leader of our time:

Trump has a vast and loyal following. Currently three-fourths of all Republicans see him as their leader. He won 74 million votes, the highest total ever for a sitting president or a losing presidential candidate.

Their loyalty is traceable to what Trump achieved, whom and how he fought, and the new issues he introduced and has become indelibly associated. Foremost among these is his struggle to secure the Southern border against endless illegal migrant crossings.

Unrestricted immigration from the South, the Third Worldization of America, is the true existential threat “climate change” purports to be.

Among all of the chattering out there, only Trump has trained his eye on the real threats. He wants to transition America into a post-industrial age because the failure of democracy became inevitable when it endorsed that existential threat.

Just as the original Industrial age relied on engineers, so will the future King Trump rely on Engineer Kings. Politically this will enable Trump to turn the binary politics of America into a vertical class system comparable to  Britain, but the trick of it all will be preserving sea power to protect trade routes just like in the British Empire previously:

Mahan argued that British control of the seas, combined with a corresponding decline in the naval strength of its major European rivals, paved the way for Great Britain’s emergence as the world’s dominant military, political, and economic power. Mahan and some leading American politicians believed that these lessons could be applied to U.S. foreign policy, particularly in the quest to expand U.S. markets overseas.

Mahan’s books complemented the work of one of his contemporaries, Professor Frederick Jackson Turner, who is best known for his seminal essay of 1893, “The Significance of the Frontier in American History.” An American history professor at the University of Wisconsin, Turner postulated that westward migration across the North American continent and the country’s population growth had finally led to the “closing” of the American frontier, with profound social and economic consequences. While Turner did not explicitly argue for a shift towards commercial expansion overseas, he did note that calls for a “vigorous foreign policy” were signs that Americans were increasingly looking outside the continental United States in order to satiate their desire for new economic opportunities and markets.

Mahan was one of the foremost proponents of the “vigorous foreign policy” referred to by Turner. Mahan believed that the U.S. economy would soon be unable to absorb the massive amounts of industrial and commercial goods being produced domestically, and he argued that the United States should seek new markets abroad. What concerned Mahan most was ensuring that the U.S. Government could guarantee access to these new international markets. Securing such access would require three things: a merchant navy, which could carry American products to new markets across the “great highway” of the high seas; an American battleship navy to deter or destroy rival fleets; and a network of naval bases capable of providing fuel and supplies for the enlarged navy, and maintaining open lines of communications between the United States and its new markets.

Instead of sea trade, Trump will preside over the space trade, with routes kept open by his Space Force.

“Space…going to be a lot of things happening in space. Because space is the world’s newest warfighting domain. Amid grave threats to our national security, American superiority in space is absolutely vital. And we’re leading, but we’re not leading by enough. But very shortly, we’ll be leading by a lot. The Space Force will help us deter aggression and control the ultimate high ground,” [Trump said].

“We are at the dawn of a new era for our nation’s armed forces,” Secretary of Defense Mark Esper said. “The establishment of the U.S. Space Force is an historic event and a strategic imperative for our nation. Space has become so important to our way of life, our economy and our national security that we must be prepared as a nation to protect it from hostile actions.”

“In military operations, space is not just a place from which we support combat operations in other domains, but a warfighting domain in and of itself,” Gen. Mark Milley, Chairman of the Joint Chiefs of Staff, said in the same statement. “Our adversaries are building and deploying capabilities to threaten us, so we can no longer take space for granted. The U.S. Space Force is the necessary and essential step our nation will take to defend our national interests in space today and into the future.”

Most people will not get all this of course and we might even see some form of war and genocide before the sun rises again. This would include current activities like the silent extraction of African minerals obfuscated by Obamaesque equality and humanitarian outreach programs and China desperately pushing its Belt and Road Initiative obscuring their destruction of our fish resources.

But one thing that makes all this truly clear, is that the latest President of America’s energetic release of Executive Orders to reverse Trumpian policies, failed to remove the signature move to establish America’s Space Force. As usual, Trump leads in reality, while others attend to public opinion; this is the mark of a king, not a politician.

Why National Socialism is Not Extreme Enough | Why Did America Shift Left After WW2?