Why National Socialism is Not Extreme Enough 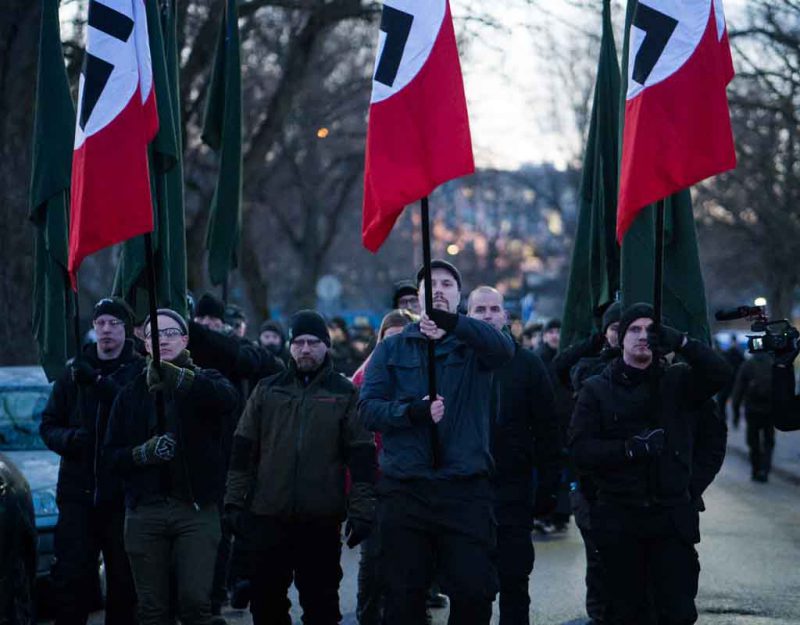 Living in a democracy, we are accustomed to people making symbolic statements in order to make themselves appear inoffensive, harmless, and “revolutionary.” Such is the nature of living in prole-rule after a revolution.

Many confuse things that I say with an attempt to be neutral, accepting, tolerant, and so on. Instead, I argue from a position of “what is good for humanity and Western Civilization for eternity” which ends up being both less and more extreme.

For example, your average National Socialist wants to ban Blacks and Jews; I want to send away everyone but the founding ethnic group, which is in Germany Germans and in America ethnic Western Europeans.

Their policy would leave behind a mixed group of “huwhites” with various Asian and African influences, eventually producing a round-faced, wide-eyed, and square-headed population ethnically closer to Arabs, Jews, or Northeastern Chinese than the people who have produced Western Civilization for centuries.

This is not to say that there are not some areas where I align perfectly with National Socialism. Their environmental policy was a good start; animal protection laws made sense; euthanizing retards and sterilizing career criminals is sanity.

But totalitarianism? That represents the instability of democracy in another form, one which cannot recognize its true core made of the assumptions it adopts, and will be inherently prone toward militarization to achieve false unity, much like France in the time of Napoleon or the latter half of the Soviet Union.

While I recognize that all Jews, and only Jews, belong in Israel, any thought of using people as slaves for the war machine, allowing them to starve, or encouraging partisans to burn them in barns strikes me as unhinged and horrible.

Similarly the repression of thought and speech under National Socialism took on an ugly and Leftist character. Rightists ban threats to social order; Leftists ban anything but their orthodoxy. The Nazis were more like the Left than the Right here.

At the base of it all, National Socialism shows us another System, or a bureaucracy based on the idea of everyone being equal (except that in their case, they select by ethnicity for who is equal). These all have the same problems.

In particular, the Nazi state depended on a tax-and-spend policy to keep entitlements going, partnered with a Right-wing-style supply-side economy. Their system has more in common with China or Singapore than the West.

For the record, I do not believe most of the Holocaust narrative, but I believe Speer, and if you enslave people to work for your war effort — keep in mind that these are people you demonize — and they then starve or die of disease in great numbers, it does not matter that you did not actually stuff them into gas chambers. The gas chambers, soap, lampshades, and other myths are obviously silly wartime propaganda.

Let us look at some aspects of National Socialism and see how they fit the “raging realist” test; as someone who believes in realism, I am mostly conservative, but incorporate a wide range of influences, so long as they are (you guessed it) realist, or based in results in reality and not human assessments of those results or emotions about them like all of these utilitarian bureaucratic systems, including both democracy and National Socialism.

1. Are you against teaching children as young as five years old about pan-sexualism, homosexuality, and transgenderism?

No. I reject the idea of public, standardized education. People can educate their kids how they want. Taxes will be lower, housing will cost less, and we can get away from trying to bicker endlessly over what to teach the kids. Most people will be barely literate, but that is true anyway, and it is better to have them be actually illiterate than literate enough to pose at being able to think when they in fact know and can analyze nothing.

Similarly, I reject any calls to make people either demonize or accept homosexuality, transsexualism, and pansexualism. No one should be forced to rent to, sell to, hire, or socialize with any of these people if they do not want to. Society will naturally sort itself.

My longterm view on homosexuals is to leave them alone, which offends both sides. The Left becomes enraged that I do not want to give them civil rights protections, and the Right foams over at the thought that I do not want to persecute them. The homosexual lobby rages because it can no longer be public, since “leave them alone” is a two-way street: in exchange for our tolerance, homosexuals keep it quiet, like swingers and other sexual non-conformists.

2. Are you for the enforcement of border laws and the expulsion of illegal aliens?

No, I am for making it illegal for anyone to interact with an illegal alien and for illegal aliens to have zero rights. That means that if someone hauls off and kills one with an axe, we hose down the pavement and chuck the guts in a nearby dumpster, but do nothing else. In my view, having a single ethnic group per society is a necessary but not sufficient condition for civilization; you need ethno-nationalism plus a functional society, but lack of ethno-nationalism is fatal. This is ethnic and not racial, which means that we send the Asians back to Asia, Africans back to Africa, and Irish to Africa.

3. Are you opposed to outsourcing manufacturing to other countries?

I favor total self-sufficiency, but this must be enforced by organic culture and not government. Any role that government takes over becomes weakened and eventually lost in the population, so the more that government does, the more you weaken your people.

4. Should the government encourage domestic economic self-sufficiency (i.e., the production of anything needed stays within the confines of the country)?

Same answer. This should not be a function of government, but common sense. If government takes over, common sense “degenerates” or becomes lost and eventually bred out of the population. Government doing things, even good things, is dysgenic.

5. Do you believe that the people should have a direct say on government spending priorities such as infrastructure projects (e.g., roads, hospitals, communications towers)?

Let me say this loudly and clearly in a language that most understand: [expletive deleted] “the people.”

Who are “the people”? If you mean everyone, then you are insane; everyone agrees on nothing. If you mean a utilitarian-style “majority,” then you are nuts, because this becomes a smaller plurality the more complex or controversial the issue is, and the most necessary issues are controversial.

You cannot escape the need for quality leaders. You will be led by someone, no matter what you do. You have a choice for a competent leader or incompetent. Appealing to the lowest common denominator mostly gets you incompetents.

If you are going to leave democracy behind, just leave it behind; you do not have to run to totalitarianism, since this is the flipside of democracy and not its opposite. I favor social hierarchy (feudalism, caste) and aristocracy (monarchism) instead. These are consistent principles that breed us toward excellence instead of degeneracy.

6. Should the government embrace a balanced budget, predicated on a strong currency?

Government should do very little. Budgets do not balance in wartime; your best government fights short, decisive wars instead of engaging in forever war, and generally concerns itself with little beyond its own borders. Most human stupidity — Genghis Khan, Muslim invasions, peasant revolts — can be handled by defeating and repelling the invaders, then eugenically removing their supporters and, per nationalism, exiling anyone of mixed-ethnic or mixed-race backgrounds.

7. Do you believe AntiFa and BLM terrorists should be prosecuted?

No, I do not believe in slamming barn doors after the horse is long gone; I believe in eugenically removing via exile those who are prone to neurosis, including all Leftists. There is something wrong with these people. Send them all to Venezuela, and do it invisibly and silently so that future generations are unaware that Watchers are waiting to remove the unfit.

8. Should the income tax be capped at 14% – without any games regarding ridiculous deductions?

The more accurate question: should any taxes be flat, or “regressive”? Yes, of course. No one gets a free ride, especially if you are silly enough to let them offload costs onto others.

Ideally the purpose of tax is simple: to build up a government investment portfolio, so that it can live off the interest of this at least partially, and have to tax a lot less.

To keep government small, however, you have to keep it informal, which is why an aristocracy is superior.

9. Do you believe patriotism and civil manners should be taught in schools?

10. Do you believe that social welfare benefits (e.g., food stamps, welfare, housing) should be tied to work and good moral behavior, to include when necessary, government provided jobs (e.g., cleaning the streets, washing ambulances, etc) and requiring drug and alcohol tests before receiving such benefits?

Let me stop you right here:

10. Do you believe that social welfare benefits

I do not believe in these at all. The middle classes always give a lot to charity, and that should take on this function, not government. Natural selection needs to be in force at all times, and those who want to be alcoholic bums or permanent poor need to get sent to the third world where that behavior is normal. Not here.

Yet, whether they know it or not, most on the Right are natural born Fascists – and should embrace the term.

I have to disagree here. Fascism is an attempt to adopt the Right within a Leftist system; those on the Right embrace something similar, but both more extreme and less method-based. We are ends-over-means type people, where Leftists are means-over-ends (a bit of a sleight-of-hand, since their ends and means are the same: equality). Fascism formalizes what we need to have as part of our organic culture and gut instinct, which is an unrelenting, aggressive, and intolerant realism.

We have met the enemy, and he is us, or at least, most people are not so good, and need some discipline to be made good, if not simply getting bred out of the gene pool. Fascism tries to — following the “Mandarin Method” of Genghis Khan — use the broken by indoctrinating them in ideology and procedure, but that just hides the bad and makes us depend on it, which allows it to take advantage of us.

Realists like myself prefer nature. “Good to the good, and bad to the bad” is the eternal morality; anything like “good to everyone, good and bad alike” is toxic, even if it demands their allegiance to some kind of system.

National Socialism has some commendable aspects and some dysfunctional ones. None of us want to live under a totalitarian regime, but the bigger problem is that National Socialism does not get far enough away from democracy, utilitarianism, and bureaucracy.

Diversity Does Not Work (#4) | King Trump