It’s Time For A Second War With Mexico 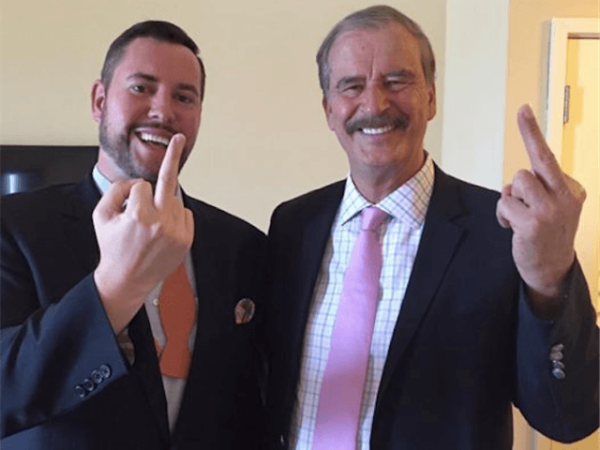 Apparently former Mexican president Vicente Fox is threatened by Donald Trump’s call to cut off the great mexodus Northward. He posted a picture of himself and a journalist giving Trump “the finger.” While this is probably mostly just posturing, jumping on the bandwagon to try to keep himself relevant, it also shows how much of a threat Trump is to the existing order.

While articles bemoan the incivility of the gesture, few have looked into the reasons behind it. Simply put, America’s neighbors are accustomed to depending on her, and that makes them underconfident, which causes this salty attitude.

If the United States vanished tomorrow, Mexico’s economy would collapse. Not only would it be out the drug money which constitutes most of its gross national product, but it would lose the source of regional defense that keeps it safe and secure. Its biggest trading partner and foreign hiring agency would be gone and its local industry could not keep up. The same is true of Canada.

Both of these states show us the problem of “dependency” relationships. They need the USA, and they hate that, because they would rather be independent, or entirely self-reliant. Instead of working toward that goal, they agitate against the United States because they hate the dependency and it is easier to blame the Americans than their own lack of capacity.

Some of you may remember the Mexican-American War (1846-1848). Mexico was a mess, having liberated itself a generation before and immediately become ruled by the vote of the peasants, which was (predictably) disastrous. The Americans, being accustomed to making rough lands into paradises, believed they should simply dominate this southern territory and make it into something better.

The result of the war was that Mexico lost its dubious claims to North American territory, and retreated into resentment which simmers to this day. The lands Mexico let go, which it never occupied but merely claimed on the basis of the Spanish claim, despite being unable to subdue the Indians in those territories, became far more prosperous. This rankles the soul of Mexico to this day.

Since that time, nothing much has come of Mexico. It is a friendly country with many nice people and an endemic corruption problem that, were there no wealth flowing in from the North, would quickly cause it to implode. Now that its politicians have expressed resentment that the USA dare to stop the Great Freebie of Mexican immigration (and money sent back home that keeps Mexico afloat) perhaps it is time to end the resentment with conquest.

American military forces could sweep into Mexico and flatten its defenses. Then, friendly bureaucrats could help load every Mexican onto trains and boats and send them directly to Brazil. Turn the whole place into a nature park, in other words, and end the permanent flow of drugs, crime and corruption from our Southern border. If Vicente Fox thinks that Machiavellian self-interest is appropriate for Mexico, the United States should adopt that as a standard — and end the problem.

We can build Trump’s wall, alright, at the southern border — of Mexico. We can create a giant carbon sink so people do not have to buy Prius and “Energy Star” products. We can make prosperity out of a failed state and a failing nation. Our existing Mexicans here can join their compatriots in Brazil, whose people are ethnically closer to Mexicans than anything in North America.

Our relationship with the countries around us has been one-sided for too long. They take, then they attack us in snide and childish ways. Canada will shape up as the smoking ruins of Mexico City come into view. They might even start being friendly, like a child who has been spanked hard and realizes that resentment is a failing strategy.

Just for kicks, we can rename Mexico “The Donald Trump Park and Nature Preserve” and put up signs in English. It might upset millennials, but we will not be dealing with this smoldering resentment and corrupt behavior any longer.