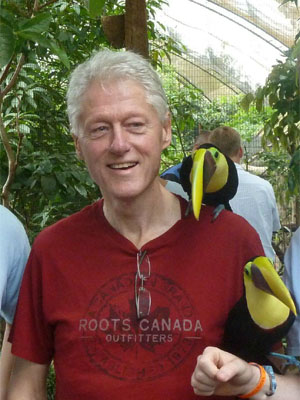 The left uses oblivion as a weapon. Their standard modus operandi is to proclaim as truth something they wish were true, and then to exclude all those who don’t act as if is true.

Waning days of the Barack Obama presidency will show us this behavior again. As mentioned on this blog previously, Obama is not Carter II but Clinton II, which means that when he’s in a tight spot he will come up with a new ideological initiative like socialized medicine or gay marriage. Instead of addressing the problems in front of him, he will bring up a symbolic issue that unites the faithful on the left.

Bill Clinton knew the psychology of the left quite well. Its singular mechanism is negativity toward reality partnered with a sense of self-pity, which means that it only survives by uniting people through hatred. Its victims are for that reason addicted to “reform” movements of all kinds because they perceive these as giving meaning to their lives. They are no longer mere cogs in the machine; they are grand visionaries who are far more important than their day-to-day existence indicates.

It is thus not surprising that the left is atheistic. Leftism is a form of religion. It requires an ideal, which is total personal freedom and absence of conflict through equality, which is itself a type of pacifism that hopes to reduce conflict by reducing the “need” for conquest caused by inequality. This ideal must be thoroughly open-ended with no discernible goal, because if that goal were ever reached, liberals would become obsolete. Finally, it requires an enemy at all times, and this enemy must be seen as promoting inequality for the sake of cruelty or control. Thus the leftist replaces confusion about existence with simple, tangible answers.

Clinton was a master of pandering to this mentality. His strategy was to make vague statements about his ideals, wait for the opposition to react, and then to attack them. When real-world problems arose, he got more and more ideological, which is exactly how his audience would react in the same situation. Oftentimes when he got in actual hot water, he threw out a totally idealistic plan as a kind of Hail Mary pass. To his audience, he looked like a martyr beset by cruel and unsophisticated conservatives, although to his opposition he looked like he had no intention of accomplishing what he claimed was his goal.

Obama has mastered a similar strategy. When the going gets tough, he distracts with a plan that’s so grounded in liberal ideology that his audience would feel guilty for not supporting it. This distracts them, and makes them respond with anger to any attacks on Obama, since he’s acting out their ideology. The more the pressure rises, the more he deflects attention from consequences in the real world to thoughts about what might be ideal and what might make us all feel warm fuzzies deep inside.

The result is going to be a baffler during this election year. Mitt Romney is walking a tight line as it is, between the social conservatives and economic conservatives who are otherwise moderates. He has already just about singlehandedly validated Mormonism as merely another sect of Protestantism and not some weird cult, but the road ahead for him is difficult, in part because he’s arguing against a soft brick wall.

Obama’s soft brick wall strategy will be to talk around Romney’s bullet points, and then before the issue can be defined with any clarity, launching one of those Hail Marys. If Romney talks economy, Obama will talk civil rights. If foreign policy is the issue, Obama will talk entitlements. If talk wanders to policy or law, Obama is going to throw out gay marriage, drug legalization, socialized medicine or any other distraction he can.

The soft brick wall conveys its audience straight into oblivion by design. Acting oblivious, Obama will simply ignore the issues the opposition wants to talk about and substitute his own. The audience will feel too guilt-bound to deviate at that point.

We already know that most younger voters and almost all ethnic minorities always vote leftist. Obama might be able to make this work by hypnotizing them Clinton-style with a strategy of winning by losing, or failing at debate but preaching so successfully to the choir that they’ll turn out in force to re-elect him.

The Art of Intelligence: Lessons from a Life in the CIA’s Clandestine Service by Henry A. Crumpton | Convergence