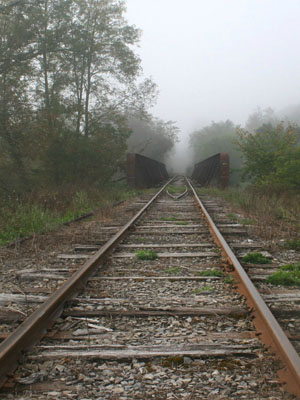 In his New Right manifesto Why We Fight, Guillaume Faye writes about the West approaching a “convergence of catastrophes” formed of environmental, political and social crises finally reaching maturity.

He makes a good point but like most human things, this one is unlikely to be a quick event but a slow one. Our minds want something quick, vivid, dramatic and discrete, like an alien invasion or a massive flood. That type of event we can grasp easily, symbolize handily and envision ourselves motivated to fight it. On the other hand, what is most likely is a slow and gradual decay, not coming at us straight on like a big point, but emerging from the aggregate of details. This is how civilizations like Greece and Rome fade into irrelevance so that when the final coup de grace occurs at the hands of raging Mongols or vicious Vandals, it’s an anti-climax since the real relevance passed long ago.

As I read Paul Kersey’s Escape from Detroit, I’m reminded of how slow collapse takes first world societies to third world on a gradual incline so that no one notices the rolling downward until momentum is unstoppable. This is after all how things most commonly pass out of this world: a slow decrepitude until a myriad of health problems overwhelm the body, or an old car finally accumulating enough small problems that vital systems don’t perform adequately enough to coordinate with each other. Faye suggests that the convergence of catastrophes will include external forces like a collapse of the natural world, but even these things move slowly.

If you think about a simple example, like dumping poison in a single lake, you can imagine a threshold after which toxicity is too much for any life. But nature as a whole is more complex, and it fails in layers, leaving only the most vital. It is unlikely to fail entirely; more likely, it will adapt to whatever environment is left. A massive loss of biodiversity will make it a radically different world but life will carry on, because it’s an organic system that can always find a point of equilibrium, right itself and get back on track even after massive setbacks. For this reason, it is unlikely that nature will hit a breaking point and detonate leaving nothing behind.

Social problems are the same way. They are insidious because they are slow. If crime explodes in your city, for example, the “explosion” is likely at first a doubling of crime, which still means only a handful per 100,000 people. Detroit for example has really bad years when it loses 400 people to homicide. Compared to the population of the city, that’s a tiny number of people. Statistically, which is a misleading measurement because it occurs in a pure and perfect abstract state not found in reality, this gives you a better chance of dying in a lawnmower accident than by murder. Statistics don’t address the specifics of your life and how likely this outcome is; for example, if you’re a drug dealer or live in a bad neighborhood, your chances are higher. As a result of this knowledge, people avoid crime by moving to more expensive neighborhoods.

This process takes many years, even in Detroit which saw its white population go from 76% to 8% in four decades. First they move to the suburbs, then the ex-burbs, then the gated communities, then they just telecommute. People are squeezed up the chain and most can’t pay the price for the safe housing, so live in ghettos, but even in those, most people do not face dangerous criminality, only the day to day vandalism and theft. Cities don’t go from everyday life to anarchy in a year or a decade, despite the press using such terms to describe them. The media insist upon dramatic statements of impact which is in real life, for your average person, actually rather minimal. Over time it builds up and at some point, you find yourself in a statistical situation similar to that in Brazil or Mexico. Unless you are miserably impoverished, you spend all of your time trying to buy your way out of the hood and advance yourself in life.

The real crisis happens slowly and like the factors that cause it, it hits on many levels at once. First, with your sense of culture gone, values erode and convenience rules the day. Second, the finer intellects and more capable people start seeing that their contributions go unrecognized, so they bail. The population starts dumbing itself down through decadence, dysfunction and poor choices of partners. The public “culture” begins to value this stupidity. We can see this happening already since the French Revolution kicked off liberalism in the West in 1789.

It will be joined by other factors. Our economy is having a bit of a hiccough because we spent all of our money during the Cold War on weapons, and after that, wasted even more money on social welfare programs. These programs subsidized the least productive citizens and thus transferred all that money into the hands of scoundrels who profit from the vices of the very poor. After all, they’re still poor. If all that money had gone to some legitimate end, the situation would not be as it is.

On top of that, we are going to see worsening environmental conditions. While “climate change” is Hollywood-style drama, it symbolizes a more subtle and yet destructive process. As air and water get more toxic, more species will disappear. Our food sources will shift and the results of overfishing and overhunting will be seen. As biodiversity declines, ecosystems will drop to a lower level of efficiency in order to survive, and we’ll have less fresh air and water. People will respond to this just as they do to the crisis of crime and housing, which is by buying their way out of it. They will buy air filters and water filters. This will put the problem off for more years.

As this process intensifies, more will see the yawning abyss and break away. They will go to northern lands and establish societies which will be predominantly rural, insular and violent toward outsiders. These will be the seed of the next generation of humanity, and will resemble the best of our past. The rest of humanity will continue to wind itself tighter into unstable lives, gradually perishing not from a sudden event, but from a long-term loss of meaning and will to survive.