The Art of Intelligence: Lessons from a Life in the CIA’s Clandestine Service by Henry A. Crumpton

The Art of Intelligence: Lessons from a Life in the CIA’s Clandestine Service
by Henry A. Crumpton
327 pages, The Penguin Press, $17 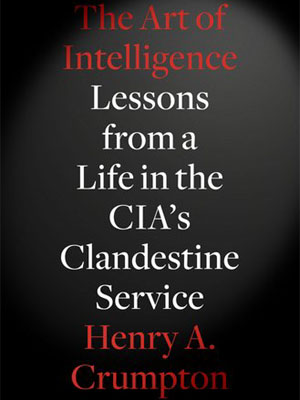 This book is not the unvarnished “truth” of a complex situation, but a well-stated perspective for one of the sides, and as a result will serve as a primary research source for that position.

Henry A. Crumpton served in the CIA and headed the post-9/11 counter-terrorism effort in the United States. His book is half-memoir, half-policy statement which reveals the objectives and methods used in Afghanistan and against terrorism. These were muddied by the media, and while this book presents only one side of the picture, it does so clearly in text that would easily translate to bullet points.

The memoir half of the book starts out with an outline of important tasks in the field of intelligence, and for each point it provides three anecdotes. These are stripped of all identifying information but very artfully reveal the author’s point nonetheless. His approach to intelligence is one of information gathering, source cultivation and a steady frustration of the goals of the opposition. The point is made repeatedly that intelligence is a hybrid of politics and military strategy, in which convincing an opponent to act in a certain way, or that their efforts have come to nothing, is as much victory as a battlefield supremacy can ever be.

From these observations Crumpton outlines intelligence work from the viewpoint of a policy maker. Although none of what he says is classified, he presents it in a clear form that allows the reader to slowly absorb the implications of what he is reading. This type of revelation does not occur in the mainstream media.

Founded in 1947, NSA built a global network of collection systems to snatch data transmitted through the atmosphere. At NSA headquarters, thousands of brilliant officers deciphered, translated, and analyzed the intercepted texts. Culling through millions of messages over decades, NSA produced unprecedented reporting both in quantity and in quality. The advent of cyberspace, however, challenged NSA’s collection abilities…NSA struggled to reinvent itself, pursuing SIGINT not only in the atmosphere but also in fiber-optic cables and in databases. (79)

In the second section of the book, Crumpton attempts to not just explain and justify, but praise American policy in Afghanistan. He walks his readers through the early encounters with al-Qaeda, and how pre-9/11 intelligence was disorganized. Then into Afghanistan the CIA goes in full force, almost overnight forming an army out of political enemies of AQ and using it to drive them out of local political control. Crumpton makes the delicate point that while Iraq was an invasion, in Afghanistan the role was to counter an invasion by Taliban, AQ and assorted radicals.

The author is not unaware of how many people have doubts about American foreign policy and intervention. As a result, the picture that emerges here is blunt and often highlights the absurd, but states clearly the clashing goals of the various parties. AQ is seen as a radicalizing extremist element and the United States as a keeper of balance. On the whole, this seems accurate; Crumpton falls short of saying that the US is an imperial power because it keeps stability worldwide, and instead deviates slightly into the usual voter-pandering about freedom and democracy, etc., which he invariably reveals as bunk by immediate afterward talking about the practical changes in peoples’ lives. His ongoing crypto-theme appears to be on the topic of using policy to raise the standard of living and thus bring stability where otherwise a tinderbox existed.

George W. Bush features slightly in this work and is treated with respect, but not much detail. The report is not negative, and while somewhat positive, isn’t raving in support of Bush either. However, it’s far from the media mantra of how terrible Bush was. Crumpton is less kind to those such as Paul Wolfowitz, who he sees as redirecting focus from Afghanistan to Iraq for unseen political goals. It’s possible that those goals were entirely legitimate, such as denying a resource nexus to potential enemies, but history has not yet revealed this. In contrast to the Iraq police action, Crumpton reveals clear goals of the American counter-terrorism strategy.

“What are our strategic objectives?” I asked Frank.

“There are three,” he responded. “First, we must destroy AQ leadership. Second, we must deny them safe haven. Third, we must attack the political-social-economic conditions the enemy exploits.” Typical. He boiled down complex issues and plans into a few simple declarative sentences. (177)

When the action in Afghanistan wound down, Crumpton took a year off to get his MA in political science. He basically attributes this decision to his unwillingness to ride along with an administration that was focusing less on Afghanistan and more on Iraq. He writes convincingly about how academia, like government, mistakes intelligence for a minor function when it is more properly viewed as the eyes and ears of the modern state. During this time, he collaborated with newfound academic allies to write a book of policy.

On Iraq, Crumpton mentions how baffling it was that Wolfowitz was so determined to assault Hussein. As mentioned in the text, Hussein was not friendly to al-Qaeda and in fact wanted to keep his dictatorship secular. However, he was a supporter of terrorism — in Palestine — so like some zombie restoration of 1980s American policy, the agenda came to include attacking him (188). Crumpton does not seem opposed to attacking Iraq so much as to shifting energy to an Iraq war when the counter-terrorism policy goals lay elsewhere. History will show who was right.

In doing so, he becomes an unwitting spokesman for globalism, which with free-market principles formed the real enemy of the terrorists (292). However, this is in in Crumpton-speak a means to the end of achieving stability and a better standard of life. Time will also tell here. What is interesting about this is that despite the great volumes of text written about the American war against terrorism, very few were able to lay it out in objective and logical form as we see it here.

This book provides quality casual reading for those interested in espionage, or the war against terror during its early days, from someone who had a ringside seat (as U.S. coordinator for counter-terrorism efforts). It does not attempt to provide a well-rounded perspective and is clearer for that, but as a result cannot on its own provide a clear view of the situation, only a forceful statement of purpose from one of the participants.

Free speech (for the dumb) | Into oblivion