Politics is like betting on horses, but with less integrity 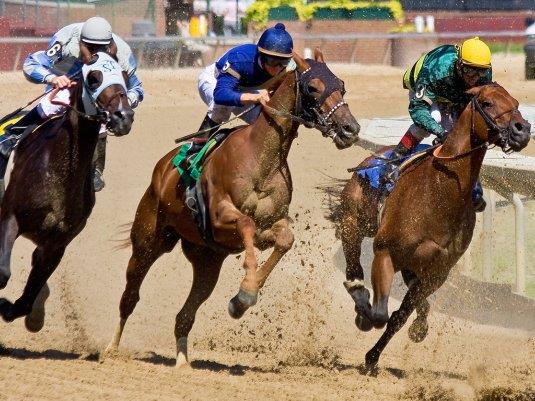 The man leading the race for the GOP Presidential Nomination has failed to charm and delight much of his partyâ€™s apparatus. These party insiders therefore swear up and down that his recent spate of victories in no way imply that the race is over. In fairness, these nay-sayers may well have a legitimate point. Weâ€™ll blow through some modeling below and examine that conjecture in the interest of determining just how interesting a horserace the GOP will be running between now and their nominating convention his summer in Cleveland, OH.

We start with a snapshot of how things lay out as of 16 March 2016. Four major competitors have won delegates. Donald Trump leads Ted Cruz by a significant, but not insurmountable margin. Marco Rubio and John Kasich trail by far larger margins. All four men still have significant work to do if they want to go to the convention with a clinched nomination. If nothing changed from here, only Trump could win outright, but his likelihood of so doing, based on prior GOP Primary voting patterns is not very high.

Total delegates â€“ The delegates a candidate has won to date

Total Required â€“ The total required to be a GOP nominee

Pct Req â€“ Percent of the remaining 1137 GOP delegates up for contention candidate has to win to reduce total short to a value of 0.

Pct Scrd â€“ The proportion of the delegates won by the big four the candidate has won.

EV (Delegates) â€“ How many the candidate â€œshouldâ€ win if he continues to win at exactly the rate he is winning at now.

Del Shortfall â€“ How many delegates he goes into Cleveland short.

P (Win Outright) â€“ The likelihood the candidate goes to Cleveland with the nomination clinched.

Now we examine the fact that Senator Rubio suspended his campaign last night. This kicks about 13% of the GOP electorate back into play for the remaining three competitors. That vote can bifurcate in three directions. Â Weâ€™ll begin with two â€œFear of a Trump Planetâ€ scenarios that weâ€™ll entitle â€œ#NeverTrumpCruz and #NeverTrumpKasich. In these two scenarios, all the votes go to one of Donald Trumpâ€™s opponents. Given such an unlikely LASER shifting of quantum voter states, only the #NeverTrumpCruz scenario really requires any significant discussion.

This discussion only becomes meaningful in the context of a situation where the entire GOP not pledged to Donald Trump joins #NeverTrump and unanimously agrees to support whoever is in 2nd place. This would leave Trump 114 delegates ahead of Ted Cruz with about 120 plus some detritus won by unsuccessful candidates who quit after Super Tuesday to be redistributed after 1st nominating ballot. Assuming complete and unwavering anti-Trump solidarity reminiscent of an Orwellian Two-Minute Hate; Cruz would collect these delegates and beat Trump for the GOP nomination.

Now we look at what Mr. Logic tells me will regrettably happen. I say this as the guy who got schlonged voting for Sen Cruz in the Alabama Primary*. Letâ€™s assume Trump, Cruz and Kasich evenly split Marco Rubioâ€™s voters in the upcoming primaries. Here we see why this show is almost over unless the band gets called out for a few encores.

Trump has a negative shortfall. A minus times a minus is a plus. He should win the nomination outright by a small, yet undeniable margin (1,324 delegates). His likelihood of getting the requisite 1,237 is about 98.5%. Trump getting 1/3 of the delegates that would otherwise have gone to Rubio is not an unlikely fish story. It is far more probable than Senator Cruz getting each and every last one of them.

As long as Cruz and Kasich both remain competitors to Donald Trump, neither man is a legitimate competitor to Donald Trump. The GOP nomination race is currently about as competitive as the NHL used to be back when the Montreal Canadians were truly â€œLes Habs.â€ If #NeverTrump isnâ€™t really just the GOP for Hillary, then it is time for them to grow up and leave #NeverNeverland.

*- Others, reserve the right to posit different definitions of â€œregrettably.â€