In Trump We Trust by Ann Coulter 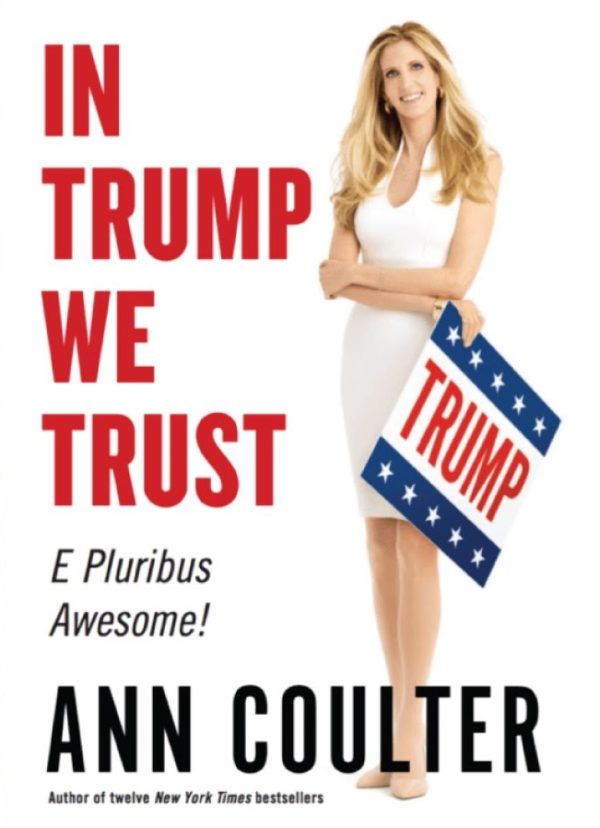 The latest from Ann Coulter shows the writer at her fiery best with an urgent message: if Donald Trump is not elected, Democrats will use demographic warfare against the founding ethnic group of America, and there will never be another Republican president. Ever.

Those who have followed the rising movement that became the Alt Right over the last decade will recognize their talking points here. In the In Trump We Trust vision, America is a dispirited land ruined by Leftist policies and its demographic change, which has made its popular dare not to hope. The book tackles every objection raised to the Trump candidacy and points out that not only are his policies workable, but he has been in control since the beginning.

As Coulter sees it, Trump turned politics on its head through the radical idea that the issues that concern Republican voters should take priority over what the political consultants, pundits and insiders think. He zeroed in the fact that immigration is the biggest issue for most Republicans; they see a genocide in progress where they will be dispossessed of control over their nation and reduced to minority status, then destroyed with taxation.

Liberals want mass third world immigration because as soon as they have invincible Democratic majorities, utopia will arrive. Then they’re not going to return the GOP’ phone calls — just like in California.

The GOP had a different set of reasons for supporting mass immigration: the business community wants cheap labor. Not every member of the donor class derives a benefit from mass immigration, but no rich person is willing to become a hate figure by bankrolling the opposition. Republican officeholders ran the numbers and realized the electoral implications won’t be felt for a few years, and by then they’ll be retired. AprÃ¨s moi, le dÃ©luge. (166)

This sounds like something straight out of the Alt Right message on immigration in general. The existing parties are in cahoots because they are paid employees of a system that wants to cannibalize the US and EU, and then its members will move on to a new country to parasitize. In Trump We Trust is a call to war that shows Coulter at her vitriolic best.

Much like her other book, the latest from Coulter is structured carefully. She bashes out her main argument in the first three chapters, then fleshes it out with extensive facts and quotations from the mainstream media throughout the latter part. Her specialty is digging up older statements from the media that contradict their current narrative.

The short form of her argument is that America is in the grips of certain pretenses advanced by the Left in the 1960s and 1990s that made it impossible to discuss important issues, which has incensed voters because no one in the Democrat or Republican parties will even discuss these issues.

As a result, they are energized by Donald Trump. Where previously they thought that they had no options to overthrow this parasitic Soviet-style leadership caste which is commonly called “the Cathedral,” they now have a candidate who has won by ignoring the guilt, political correctness and control gambits of the faux elites. Trump wins because he threw out the accepted playbook and tossed the rules, because he recognized that these rules were made to smash the interests of the historical American people.

In doing so, following on the tone of her groundbreaking 2009 column “At The End Of The Day, Diversity Has Jumped The Shark,” Coulter hammers home the points that Nationalists have made for several centuries now: immigration is abolition of the founding population, and will result in a third-world wasteland.

There’s no question but that the country is heading toward becoming Brazil. One doesn’t have to agree with the reason to see that the very rich have gotten much richer, placing them well beyond the concerns of ordinary people, and the middle class is disappearing. America doesn’t make anything anymore, except Hollywood movies and Facebook. At the same time, we’re importing a huge peasant class, which is impoverishing what remains of the middle class, whose taxes support cheap labor for the rich.

Washington think tanks churned out papers claiming that dumping millions of poor people on the country is “good for the economy.” How can that possibly be good for the people who already live here? No, it’s obviously a net loss for the people already here…They can see their taxes going up, they notice when they don’t hear a word of English being spoken in their neighborhoods, they can see that traditional celebrations are being canceled for not being “inclusive,” and they know their schools don’t have money for programs because it’s all going to English-as-a-second-language classes.

The donor class doesn’t care. The rich are like locusts: once they’ve picked America dry, they’ll move on to the next country. (28-29)

Expect this level of vitriol and clarity to be frequent, as well as the time-honed Coulter formula of inserting absurdist humor every few paragraphs to make the reading process zip along. This book takes no prisoners, and in doing so from the mainstream Right, Coulter has lifted the Alt Right into not only the political dialogue, but the consciousness of everyday Americans.

Confirmed: Russia Was Not The Source of DNC Hack | Mental Retardation