Impeach Obama — if you’re a moron 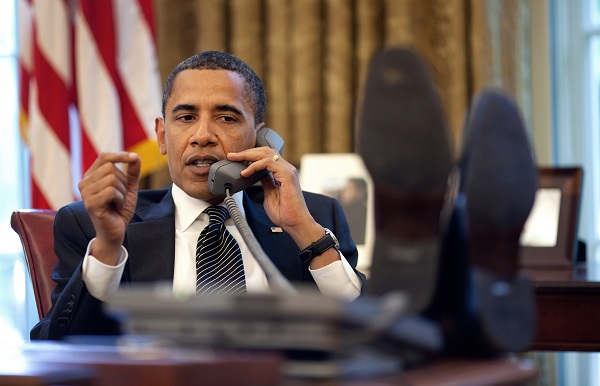 The enemies of all decency and intelligence also oppose all that the party of periodic decency and occasionally intelligence, the GOP, wants to achieve. As said before: do not listen to your enemies, because the advice they give you is to their advantage if you follow it.

Arch-leftist zombie robot talking point regurgitation zone MSNBC is beating the drums for impeachment of Barack Obama. They want Republicans to think that it is good Republican idea to impeach him, even though leftists are suggesting it.

Anything the left likes is bad and wrong; anything that seems “bipartisan” or otherwise compromise-oriented fails for the right. We will only lose more ground because the default action in a compromise is further drift to the dominant idea, which since 1945 has been “market-oriented leftism” here in the West.

Impeaching Barack Obama would give him what he has relied on his whole life: another excuse. Affirmative action gives excuses to people from protected groups (women, minorities, alternative sexualities) for low performance. Being an oddity, like a black kid in the Ivy Leagues, also provides an excuse.

If Republicans are so earth-shatteringly stupid as to suggest impeachment now, the left will help them achieve it. They smell the real endgame: history goes from “Barack Obama was an unparalleled disaster” to “Barack Obama faced heavy opposition.” That’s a liberal talking point and gives him an excuse for failure on all fronts.

Leftists want us to keep focus on Obama the man. What they want us to forget — waving a magic wand over our foreheads; you are getting very sleepy — is that Barack Obama is simply the man created by the left. They put 1960s values into him and told him to go achieve them. He has been following the beck and call of his white, urban, upper middle-class masters since high school.

Every action taken by the Obama administration has implemented barely-disguised 1960s leftist policy, which is essentially to expand market-oriented liberalism with Socialist-style subsidies and cultural Marxism, which is a way of destroying the family-oriented conservative and often religious middle class majority voting bloc, who have always voted conservative unless given reason not to.

The left would really have a good day if they managed to convince Republicans to run after Obama, not only because it would let him off the hook by giving him an excuse, but because it would miss an opportunity.

That opportunity is this: the voters have just given the GOP a mandate to change laws in this country, mostly by repealing them. This year, we saw what the goal of the 1960s reformers actually is, and we want none of it. We can see how it will be continued wealth transfer, illegal immigration and political correctness until we are all baristas working for minimum wage and dependent on federal welfare. That is how America ends, if we let the left take control!

Instead, the voters want us to go in there and start trashing those programs we do not need, starting with what increased government spending since 1950s: entitlement programs, or direct payments to voters. We’d also like all those anti-discrimination programs gone so that if we do not want to bake a cake for gays, pedophiles or anyone else, we can decline to do so.

None of this requires impeaching Barack Obama. In fact, the impeachment would inevitably become a circus which would distract from these.

Look at what the enemy is doing. The “Pravda on the Hudson” mainstream media is blacking out the Tea Party because of its social conservative stance. The left is terrified that we will use what we have, which is the popular vote and the legislature, to erase their insane programs.

At the same time, Obama presents no threat except for his administrative amnesty, which can be attacked after the fact as fraudulent and rescinded. Yes, laws work that way: if status is obtained illegally, it goes away when that aspect of it is tested in the courts or by law. Retroactive decisions are not magically off the table.

Instead of focusing on the symbolic head of the leftist beast, focus on its guts, which is what we can attack with the new legislative mandate handed to us by voters. Repeal laws, defund agencies, and communicate to the courts (even the Supreme Court defers to intent of Congress) what we want for the future. That is the real goal, not the moronic misstep of impeaching BHO.