How The Visigoth Holiday Went Sour 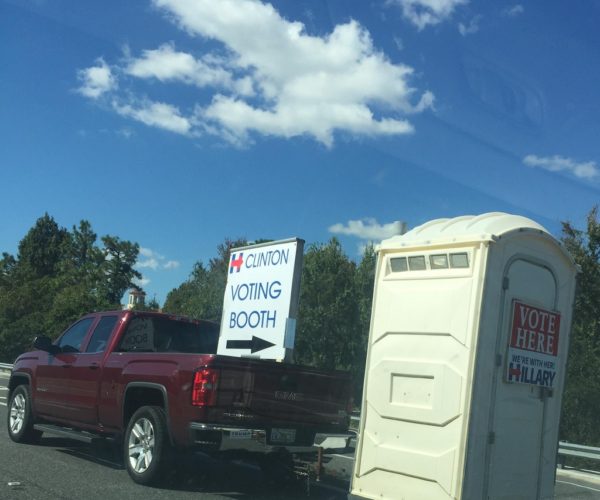 You don’t promise Louis Farrakhan a draft horse and show up with nothing but a stuffed pink pony. You also don’t piss on the man’s leg and tell him it’s raining.

Maybe there’s a little bit of the pigeon in every confidence man, or maybe you just can’t fool all the people all of the time. The Leftists promise a Visigoth Holiday. In this fantasy, the brave Leftists will raid the city, and then give out the spoils to all who help them. Vote for them, and they promise you free money.

Like the children fed a few too many candy bars on Halloween, the Reverend Farrakhan feels his stomach turn. He offers his followers the following lowdown on Hillary Clinton.

“My dear brothers and sisters, this is serious,â€ Farrakhan told his congregation. â€œHer husband and Joe Biden were the authors of the crime bill that put tens of thousands of black brothers and sisters in prison. Mrs. Clinton backed the crime bill and then called our young people super predators. Of course she apologized, but just a minute. See Hitler couldâ€™ve said to the Jews after Auschwitz, â€˜Iâ€™m so sorry.â€™ Would that be enough to satisfy you?â€

My, my, my. Did he just say she was literally Hitler?

“In 2009 Hillary Clinton received the Margaret Sanger Award from Planned Parenthood. It was Mrs. Sanger who advocated population control of black and poor people…In a 1939 letter, Sanger wrote about getting the black preachers to help with her efforts. She said, â€˜we donâ€™t want the word to go out that we want to exterminate the Negro population.â€™ â€¦ And when Mrs. Clinton received the award, [she said] I admire Margaret Sanger enormously. Her courage. Her tenacity. Her vision.â€™ Now they have to admit that the war on drugs was a war on black people.”

If not Uncle Adolf, perhaps Nathan Bedford Forrest. Or maybe Tom Wolfe desrcibed this well in his famous piece Radical Chic. Farrakhan certainly made sure Hillary caught some flak. But this is diversity’s Spirit of Mordor.

The power structure lures in a diverse coalition of supplicants with a big candy bag of gimmedats. It promises far beyond what it can actually deliver. “If you like your doctor…” Then they have to figure out how to walk it back and get them to accept less than they were promised.

Two Lyndon B. Johnson quotes describe the game that is played with “diversity.”

First he holds out the lollipop.

Then he reveals the scam.

â€œThese Negroes, theyâ€™re getting pretty uppity these days and thatâ€™s a problem for us since theyâ€™ve got something now they never had before, the political pull to back up their uppityness. Now weâ€™ve got to do something about this, weâ€™ve got to give them a little something, just enough to quiet them down, not enough to make a difference.”â€”LBJ

So Farrakhan reacts the only way he can. He tries to raise the price of African-American votes. He tries to get more on behalf of his flock. But to do so, he has to threaten Hillary. This is of limited efficacy. What? He’s voting Trump? No. Evil Emperor Lyndon B. Johnson had the right of it. They are voting Democrat for the next two centuries.

Hillary knows it. Louis knows it. The people in the pews all know it. This is just gamesmanship. The only real threat Farrakhan has to make is that he and his will not ride to war with the rest of the Visigoths. Early voting patterns suggest that this could already be happening. Given the tightening of the election and the precarious position of The Democrats’ Precious, Farrakhan senses his shot at some of the graft. He pours on the denunciations and demands.

In doing so, he reveals the Achilles Heel of diversity: when a politician pledges to support protected groups — women, ethnic minorities, LGBT — this only works so long as the interests of each group are in alignment, which they only are temporarily, at first, when each group senses that it can have gimmedats in the same way Leftists plunder the population to pay themselves millions.

Over time, however, the interests become divergent. Different ethnic minorities have different wants. Every group wants its share of the pie, but there is not enough to go around. To pander to women, Clinton has to bring up “great women” like Margaret Sanger, and when she makes a speech to an African-American audience, she mentions Martin Luther King, Jr., instead. But this causes the groups to see through the multifaceted persona to realize they are being played.

The diversity model has broken down. The grifter-in-chief has met her match, and it is the first of many, because now that one group has started the shakedown, others will do the same. Hillary has chosen a losing position because each of these groups will demand its own benefits program, and they clash with each other as we go from airy theory to thorny implementation.

What will Hillary be willing to offer in order to real his votes back in? The real question intelligent African-American voters should ask is what she will actually deliver? Maybe not enough for them to waste a vote this time out. It’s just that sort of realistic cynicism that turns the Visigoth Holiday pitched by Progressives into a bitter taste in the mouth of all who listened to the promises of plunder.

Reading The Bible As Literature | The Barntard Fiasco