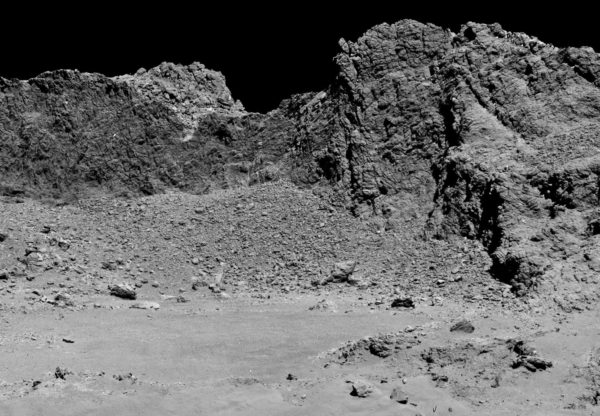 The Stryker had dropped its package. Ryan and Joins radioed the drop and got back in the vehicle. They were driving across the black and frosty ruins back to West Virginia. Ben Crumpler and Geoff Hadley suited up, and tromped their way up the staircase to get the food and necessities that would keep them alive for five more days.

It would be five more boring days. Ben Crumpler’s replacement was supposed to have arrived. Crumpler had radioed back asking to be left out in The Outpost to play with the Geiger Counters. Geoff Hadley would do his ten days, but would raise heck if he were left “buried in The Cat Box” measuring radiation levels one hour longer than was required. He could do the time. He couldn’t imagine a normal person asking for an extended sentence. He decided to find out just how many screws had come loose in Crumpler’s pointy, little head.

Hadley: “You’ve been out for ten days, Crumpler. You actually like this stuff?”

Crumpler: “No way, Man. It looks like Yellowstone cooked off out here.”

Hadley: “So why stay on post more than is required?”

Crumpler: “I’m persona non grata back at The Mountain.”

Crumpler: “I’ll fill you in. If you survived a city on War Day, you don’t want to go back to The Mountain. Here’s how it got ugly…”

As the two finished gathering their provisions and tromped back down to the decontamination chamber to wipe everything down before reentering the interior, Crumpler recounted a grim story…..

While en route to another Outpost, Stanley Hicks had the misfortune of seeing something moving. It was human. It walked bent over and huddled through the gritty permanent twilight that had descended in the weeks following War Day.

It looked less murky out now than it had their first trip outside The Mountain, but that was relative. The poor Stuckee would had tried pulling his Pro-Mask off ten days after the rad count was low enough to go outside had spent two days snotting and spitting up brownish gook. Whoever this was would be suffering. Hicks had too good of a heart. He alerted his Vehicle Commander to what he had spotted.

They hauled in a battered, dying man. He had apparently dressed himself in as many layers of clothing as he could scrounge, and had put a painter’s mask over his mouth and nose in hopes of not breathing in the atmospheric ash soup. This had worked about like it should have.

The man had collapsed in a heap before they had even caught up with him. The vehicle crew discovered he was coated with soot and burning with fever. They barely kept him alive on route back to the shelter.

His name was Carl Kroffter. He probably had no business going outdoors even back when we still were having pleasant sunny days. He wasn’t an athletic man at all and was too small to seriously carry a ruck. He wasn’t a guy you’d even think could cause a disaster, but he managed. Lord, did Kroffter manage.

Hicks and his buddies took Kroffter to see Doc Cousins who spent three days fixing his sorry butt. Kroffter coughed up some glop and gradually stopped burning himself alive with fever. Then it was time for Hicks to meet with The Council. Nobody knows what exactly goes on in The Head Shop, but Kroffter apparently won over the smart boys. He was set up with a living cube and let loose on his own reconnaissance.

Kroffter claimed he knew people in the FedGov that were still in business. We doubted him and figured he was just a talker. There was no way the FedGov could have survived the way Russia and China had pounded them like cheap veal.

Kroffter begged to differ. He claimed we had surprised Russia and ruined them. China had gotten a few good blows against us before we “snuffed ’em like a puppy” as Kroffter had put it. All we would have had to do was get it back together and take over the planet. “Sure.” We all said.

But he kept going and got worse the more he ran his yap. He told us The Big Man was safe under the Pentagon and that we’d be wise to fall back into line. He started talking about how The Little People would start being brought back into line. He told us we were lucky to have a guy like him to take up for us. “Thanks a bunch.” We told him.

Then word got back to The Council Kroffter had pissed off most of the folks he interacted with. He was summoned back to The Head Shop. He came back like a guy who had suffered an ass-chewing and wasn’t very repentent. He was eating lunch with about forty or so other survivors. He went off on a rant nobody wanted to hear.

We didn’t realize how totally useless we were, having survived the worst military strike ever unleashed on mankind and explained this to Kroffter. He was unimpressed and told us without him, FedGov was gonna’ put us under the hammer.

Now Kroffter didn’t die just yet. He still had another foot or so of his grave to dig with his mouth. It was then that he unleashed the ne plus ultra. “Let me say this slowly for all you Barntards….” He angrily yelled but never finished. Ned Fortchen had finally eaten his fill of crap sandwich and had grabbed Kroffter by his neck.

“Kick his pussy ass!” Others rejoined.

Ned was wailing away and shaking Kroffter the way a cat works a chew-toy. He dropped Kroffter and began stomping him. “Kill! Kill! Kill!” Yelled the lunchtime crowd. A few people tried to pull Ned off. The crowd joined in to beat anyone who tried to help the badly-injured Kroffter. They even started curb-stomping two women who got involved. The scene had devolved into a riot.

Kroffter’s body went into the fermenter that afternoon and was producing fuel oil by the end of the week. Some angry people started threatening one another until Roscoe Benning, an Army Colonel who had the bearing to get a hold of bad situations, got in between the angry groups to restore order. But then things started happening every time Ned Fortchen’s boys got someone alone. They’d ask. “Are you from country or from city?”

“City.” Was a really bad answer. I’m from right next to Pittsburgh. I lied my sorry butt off and told them I came from the sticks. I knew that lie wouldn’t last long, so I offered Bob Pomeroy the opportunity to skip his ten days at The Cat Box. I didn’t want to be around when Fortchen decided to have another friendly conversation with me about my origins.

Hadley: “I knew Fortchen was an ass and all, but that’s really bad.”

Crumpler: “He just snapped. The whole time he was power-driving Kroffter he was yelling about Baskets of Deplorables and how the FedGov killed us all with nukes.”

Hadley: “I pretty much stayed out of the election stuff, but after the nukes flew I sure wished I had voted against Hillary.”

Crumpler: “I did. But I don’t think Ned’s gonna be listening. Can you put in a good word for me when you go back?”

Hadley shrugged and said sure. He no more meant to mention a guy who was on Ned Fortchen’s list than he intended to jog ten miles through the waste. Crumpler was on his own.

The whole world was on its own.