How Can We Blame Capitalism Today? 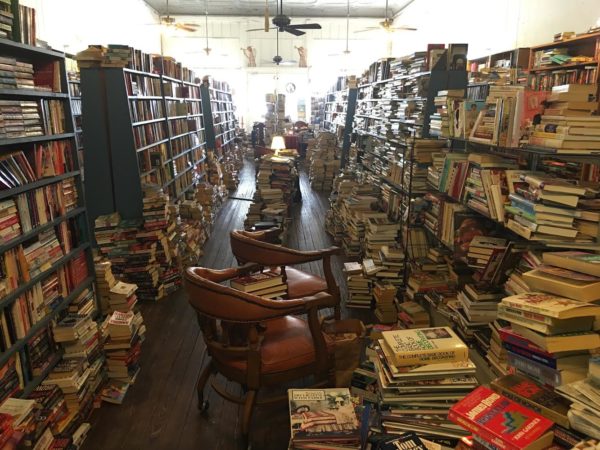 On a lazy weekend day, sometimes one wanders into a bookstore, looking for a place of solace from the screaming engines of the world and the constant chatter of others. But since the corporate chain replaced our local stores, much has changed in the quest for a few moments to become lost in the presence of old printed friends and maybe to find some new ones.

It is hard to blame the corporate bookstore. They offered the product at a lower price, and could stock many more options. In addition, they installed a large seating area which serves coffee and treats, which makes the bookstore an ideal destination to meet someone. In our society, the only way to interact in public is through buying things, and these big stores have made that easier and cheaper.

At the same time, something was lost: choice. We have more options than ever, but because they are all about the same, analysis paralysis results like a type of heat death. Where the local bookstore, having far less shelf space, had to choose the best of each category according to the judgment of the employees and owners, now everything hits the shelf and it is up to us to wade through it.

That of course hits the limits of human tolerance. After you have sampled fifteen modern novels, they all start to sound about the same. Maybe they are; perhaps the same phenomenon has happened in the publishing industry itself, where instead of trying to find something good — an uneven, unpredictable process — they have decided to just crank out the average but turn up the irony, novelty of setting, and other surface traits to make each book seem to stand out. But when every book stands out that way, no book stands out.

Before everyone gave up on the idea of quality and focused on quantity, we had editors and book reviewers. These would do their best to filter out the good from the nonsense, and while they got it wrong sometimes, there was also a backup system of salons, professors and fellow writers who could convince them otherwise. Generally, the system worked.

It would not support a bookstore, however. The normal distribution applies to everything, and it means that 90% of books are mildly entertaining, 9% are informative and 1% are transformative. This means that a healthy bookstore has perhaps ten percent of the output of the industry as the bulk of its stock, with some classics and new releases thrown in for good measure.

If we were to do that, most of Barnes and Noble would be empty, for example. This works by me; turn it into a coffee shop with book racks and a row of internet-connected tablets or computers. Keep it open 24-7. Serve alcohol, and give people back a public space that they need. And drop the endless garbage — the 90% — that provokes a frenzy when it is new, briefly, then goes to the sale rack.

The cool kids are out there trying to blame capitalism for this dilemma. They argue that capitalism rewards the bad, and naturally corrupts every industry, and chases the lowest common denominator. The only question we might ask them is: are they sure that it is capitalism doing this, or something else?

Second, we might point out that capitalism is an economic system, not a social, moral or leadership one. In other words, it is designed to keep the fires burning and nothing more. You do not ask a fruit tree for its advice on how to use its fruit; you have a social order wrapped around your economic system which directs it toward certain ends through the values and mores inherent to culture.

Finally, it is useful to point out that there are different options for economic system. You can have one that is chaotic because it is super-simplified and centrally controlled like communism, or you can admit that systems work best when distributed and localized, and have abundance with capitalism. Communism and socialism create shortages; capitalism creates excess, but you can work with that.

Who is the bastard here? I would point the finger at two other ideas: (1) the Eternal Human Problem, which is the formation of herd behavior, and (2) the naive fear of accountability in corporate America, where anyone who does not follow the current trends is seen as risky and removed the instant something “seems to” be going wrong, even though chasing trends devalues — i.e., makes more ordinary — any initiative.

Add to that the fact that we have educated the ineducable, so they are now book-buying customers, thrown diversity into the mix so that the market has fragmented in niches where low quality is more easily tolerated, dumped money on the clueless and made politics a replacement for transformative profundity, and you can see why the stuff in the bookstore is mostly bad.

Suggesting that our world needs editors, tastemakers and wise leaders like aristocrats is considered a form of blasphemy these days. It is like slapping the average citizen in the face and saying, “You’re not equal!” but it is the right thing to do. In the hands of experts, who are distinguished by their natural intelligence and not test scores or grades, we get quality; with the herd, we get entropy.

I Blog To Bury Hugh Hefner, Not Praise Him | We Know Better