Have You Been Yelped Yet? 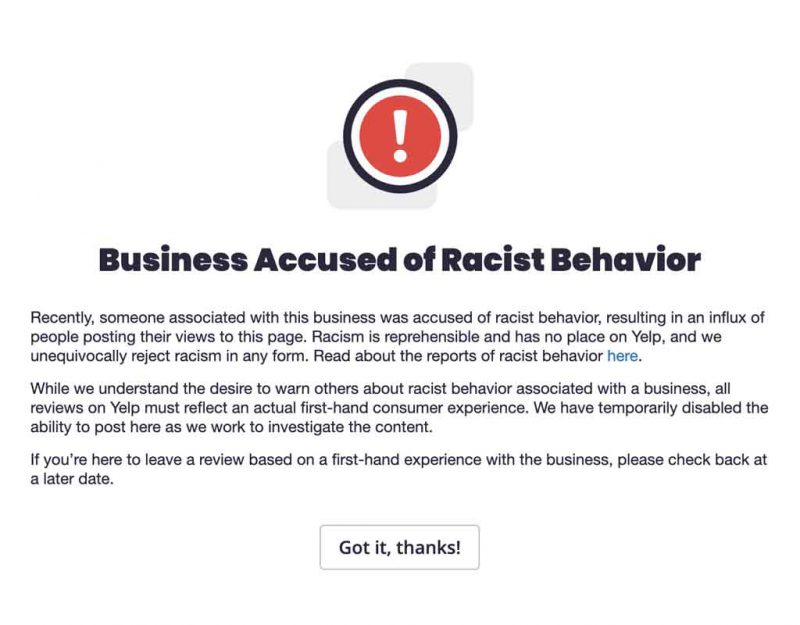 I never used to take Yelp seriously. They allow you to anonymously comment and rate some guy’s drywall installation business. If I had to compete against Joe’s Drywall and couldn’t do it very well, I’d experience some certain level of moral hazard. Wouldn’t it be easier to claim to have seen Joe show up at the worksite drunk than it would be compete against him fair and square? Things like this are why you shouldn’t necessarily believe everything you read on The Internet.

Yelp gets worse when the slip-and-fall attorney brigade examines its capabilities. Maybe someone is suing Joe’s Drywall for using carcinogenic drywall from China. Wouldn’t it be convenient for said litigation if five or ten anonymous comments showed up on Yelp accusing poor Joe of leaving dirty, old chopsticks from his Kung-Pao Chicken all over his project sites? And if you can’t close the case, accuse Joe’s Drywall of installing systemic racism along with their home improvement projects.

Communities have always turned to Yelp in reaction to current events at the local level. As the nation reckons with issues of systemic racism, we’ve seen in the last few months that there is a clear need to warn consumers about businesses associated with egregious, racially-charged actions to help people make more informed spending decisions.

So yes, Yelp is now a full-on participant in thought-policing. No, they don’t officially work for INGSOC. But, yes, they are openly now soliciting their site out to people who wish to use narrative to bash others and ruin their reputations and livelihoods. Nothing could possibly go wrong. “It’s OK!” States a sardonic meme.

Yet this is part of a larger problem. Tyrannies that only control the top level are bearable. Joe’s Drywall isn’t even visible to them. This makes it way harder to totally kill a sub-culture. You can swat a fly with relative ease. A paramecium, not so much. Something like Yelp is actually necessarily. A totalist can be an np-complete if that totalist can’t see the total set of stuff to dominate.

This is where something like Yelp is actually a problem. An Army of bitchy, Leftist Covid-Karens can virtue signal smaller and more remote dissenters from the narrative right out of their livelihoods by accusing the poor schlubs of systemic racism. Now Joe, from Joe’s Drywall; may or may not even have a High School Diploma. Yet, if Joe espouses !RACISM!, the republic trembles in fear.

It reminds me of one time in High School Biology where my lab partner and I were doing an experiment with a microscope and got really bored. We had these grass clippings that had sat in stagnant water for a couple of days to see what microbes would sprout. It took my battle buddy and I maybe ten minutes to fill in the chart with the microbe guts we’d spotted in the brackish water.

My classmate noted that if you kept he microscope focused on the little creepy critters, they’d try to swim away. I took it little further and kept following one of the little creeps with the microscope lamp. Then, mirabile dictum; something cool happened. The microbe eventually absorbed too much radiation from the lamp and got hot enough to pop. My classmate and I eventually got scolded for laughing at it, but it was more fun than the real class assignment.

What the Karens and the 1-800-BAD-BACK guys can do is focus that microscope lamp right on the nasty, anti-narrative, Trumper parameciums. If you can’t openly dump your basket of deplorables in an open grave like Stalin or Pol Pot, then you pop them under the social media microscope one by one.

If you were a Karen, then you would get a cheap, sadistic thrill from ruining these people’s lives. And that’s how you federalize anarcho-tyranny and put the totality into the emerging totalism. It’s not Big Brother, but bratty, vindictive, Little Sister that does the average guy in. As the 90’s rock group Bush put it. It’s the little things that kill.