Gab.Com Doubles Down On Shadowbanning

As many of you know, I was an early adopter and supporter of Gab.com because the internet has become the new public space and so needs protections for open discussion despite being “owned” by private entities. Since the net is shared, netizens have a responsibility to maintain reasonable free speech.

My definition of “reasonable free speech” includes all that which both contributes to discussion and fits within the form of that discussion, including being on-topic, civil, and informative. This excludes spam, for example, or repetitive posting of propaganda, but allows anyone to participate where their comments add something to the shared information resource that is the net.

Myself and other moderators maintain this standard on our sites. Someone who shows up randomly to post their favorite Flat Earth or Jewish Question theory, if the post they are commenting on is not on those topics, finds their post vanishes; those who show up with commentary, including criticism, that is on topic, informative, and civil (enough) find that their posts remain, even when they are critical of what we are doing here or insulting to myself or others.

Perhaps this is not fully in line with the First Amendment, but it preserves the spirit of the idea that the First Amendment was created to foster, namely that of open discussion. In that view, all perspectives are welcome so long as words are not used as an obstruction for discussion, just as someone who screams repeated obscenities will get ejected from any conversation, but among self-confident and experienced people, any perspective if voiced in a constructive manner is welcome in that conversation.

Think of it as a gathering of friends. You are discussing immigration; some people will talk about how good it is, and they will want to censor anyone who says otherwise, but in the interest of open discussion, we allow people to speak against immigration so long as they voice an intelligent and civil opinion that contributes to conversation. That means that random racial epithets would be out, but American Renaissance or Huffington Post style commentary would be acceptable.

In this way, open discussion serves as an opposite to democracy. Open discussion forces us to resolve disagreements because the discussion continues until some clarity is reached, and its only enemies are those things (spam, dogma, repetition, low-quality content) that threaten the open discussion. In a democracy, people have already agreed to disagree and are hoping that the vote will magically resolve that disagreement. Over time, it merely intensifies that division, as recent history shows us.

With that in mind, open discussion represents a way forward for humanity. Instead of being stuck in disagreement, we find it necessary to come to some kind of clarity. With that, action can follow. If not, the discussion intensifies instead of polarizing. Open discussion proves necessary for any kind of direction to exist.

Since the internet proves more convenient than any other means of meeting with other people, it now dominates public discussion, and social media — sites that concentrate large numbers of users — prove essential to reaching others. We need open discussion on social media, and for this reason, I and others supported Gab.com. 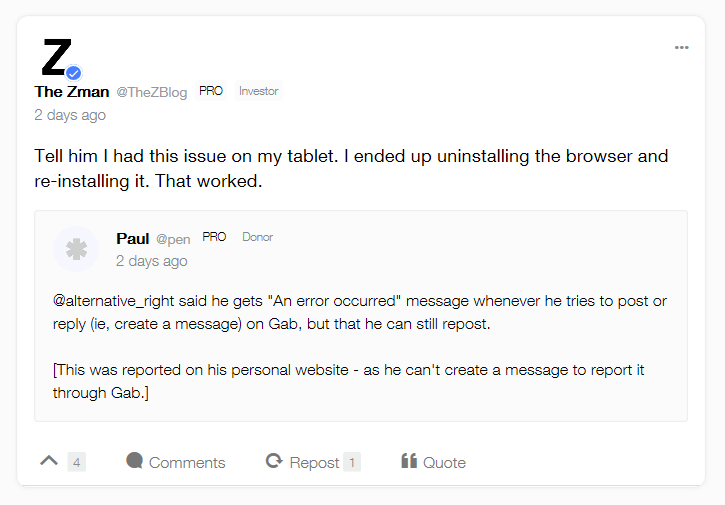 In addition, Gab.com seems to catch and ban accounts critical of Gab.com within fifteen minutes, but this glitch has persisted for days despite numerous emails to the support account. While the support staff — Torba’s wife Emily — are very pleasant, they seem to have no answers.

For this reason, I remain wary of Gab.com at this time, and encourage conservatives to drop the social media model and instead set up a network of independent sites. It seems that, in this time, open discussion is still too dangerous for commercial and government interests to support it, but separate social networks of decentralized sites can survive.

An informal network of small sites is inherently resistant to censorship, which is why the internet was designed around this formula: if one node goes down, others can fill in the slack.

By that mindset, having a thousand small blogs beats out having one giant social media service because no one can control all of them at once and thus alter mindset. Whether this Gab.com problem is a shadowban or a coding error, it reveals the weakness of the centralized model and why it will not serve conservatives.