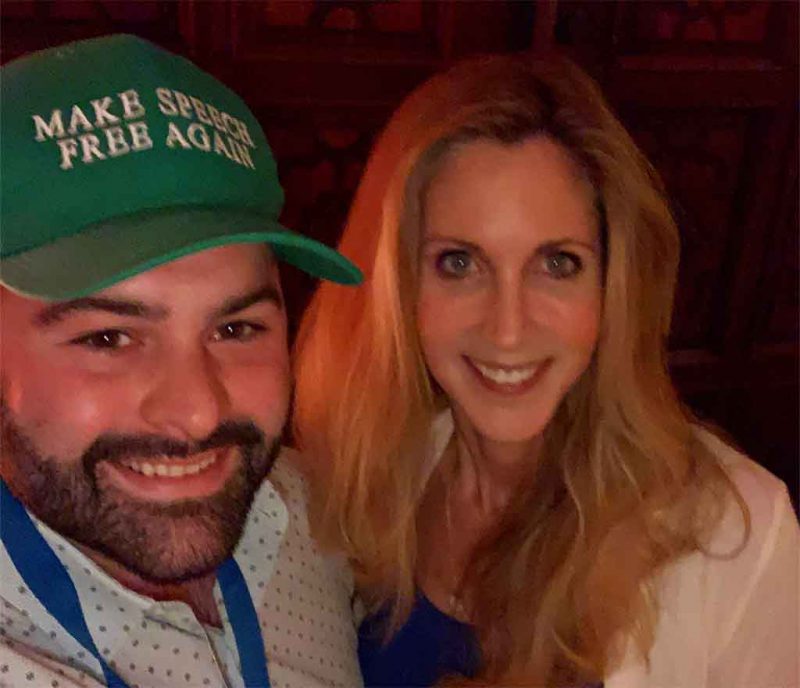 Despite having offered a promise of social media where open discussion could occur, “free speech” social media site Gab.com has begun releasing private information of users and shadowbanning conservatives despite a lack of violations of its terms of service or even threatening behavior.

As documented by Gab.com users, the site has leaked the private phone number of Chris Cantwell while targeting him for speech violations, despite his speech being in line with the Gab.com terms of service (TOS): 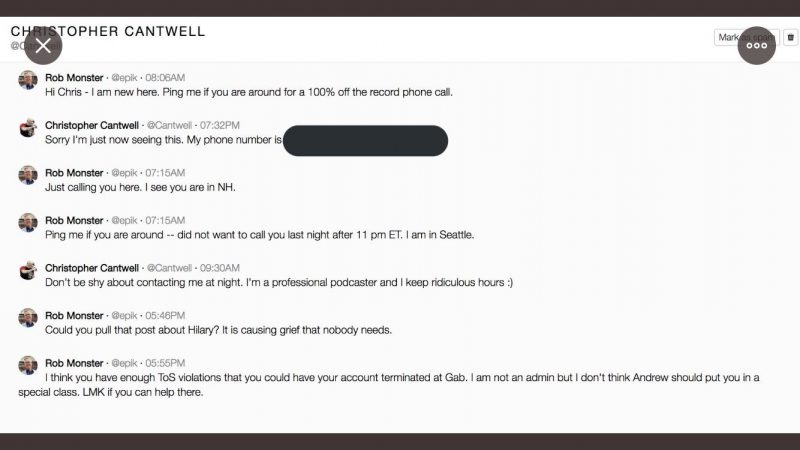 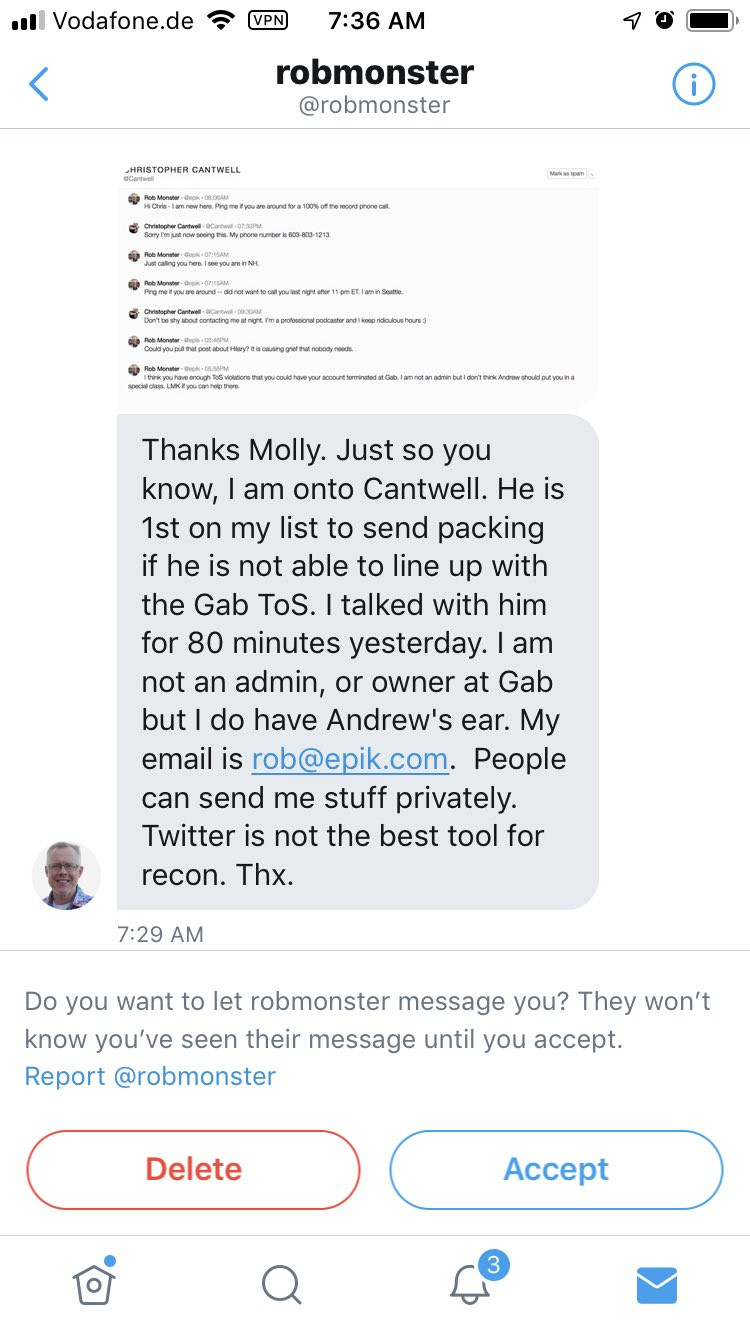 You can see the drama play out, ironically, on Twitter where Epik.com CEO Rob Monster appears to be collaborating with Leftist users to remove content from Gab.com, apparently with the endorsement of its owners.

In addition, my account on Gab.com has lost its ability to reply to messages, post new messages, and reply to comments; it can repost content but not offer commentary. The site throws error messages — either “an error has occurred” or “could not post this comment” — in response to any attempts to post even simple text messages. It is unclear whether this is a site glitch or a shadowban at this time, but a message to [email protected] twenty hours ago went unanswered: 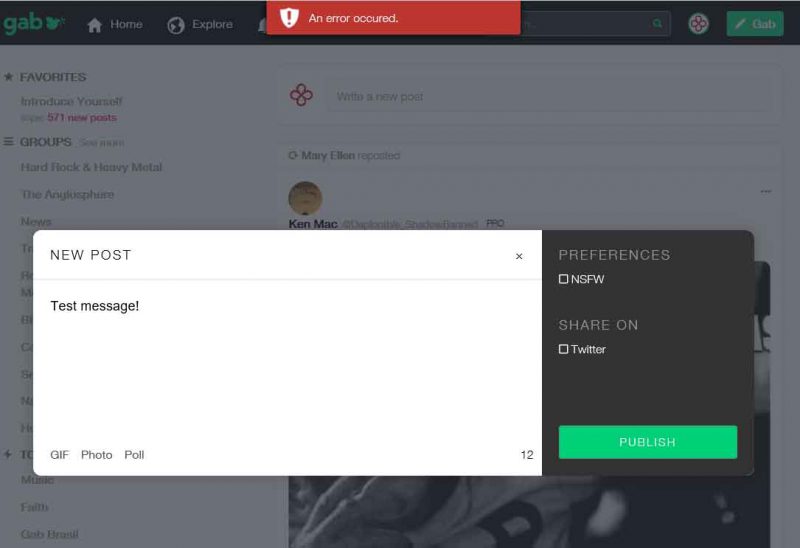 Others have pointed out that a purge may be occurring so that Gab.com can keep its upstream providers happy, but if so, they are targeting relatively innocuous accounts instead of the Robert Bowers type raging violent people:

The thing that worries me is that hundreds of accounts were recently purged. This is a sharp increase from the two high profile bannings of Weev and Paul Nehlen over the past two years. I can’t say that I am surprised that some of the edge posters were banned given that flirting with violent rhetoric, even if it is perfectly legal and falls under Brandenburg v. Ohio, is such a massive liability. No one wants to deal with the massive hassle of being deplatformed by their registrar and hosting company.

Hunter Wallace, who wrote the above, opined that the Right might do well to redecentralize instead of focusing on centralized sites like social media:

I guess you could say that I am getting social media fatigue. I don’t see the point in investing so much time and energy in building up accounts only to have your horse shot out from under you…I will still be posting on Gab, but I want to take a step back for now and see what comes of all this pressure. It is warm and cozy here. Quite honestly, we needed to spend more time building up our own platform rather than shitposting all day anyway, and the timeout has had a positive impact in that we are writing more articles.

In my view, this change is overdue. If we cannot trust Big Media, we also cannot trust Big Tech, and at this point they have influence on all the upstream providers. If a large target reveals itself, it will be attacked until it starts following the Google-inspired regime of removing “hate speech” from the internet.

Instead, Rightists can turn to the Old Internet for their future: an informal network of many sites, each with its own comment system, on which content lives without fear of censorship. If there are too many of us, we will not be targets, and by disappearing from public media, we will show the world what “no-platforming” really means: open discussion converted into propaganda by eliminating dissenting viewpoints (or merely viewpoints that are not Leftist enough).

When the internet was newer, Right-wingers created sites with blogs, forums, and mailing lists on which things could be discussed which were incompatible with the ideals of the neo-Communist regime that rules us now. That keeps us off their radar, so they have no idea what we are doing, and avoids allowing them any chance to adulterate our message by forcing Leftist conformity upon it.