Gab.com Bends But Does Not Break Under New Traffic, Antifa Attacks 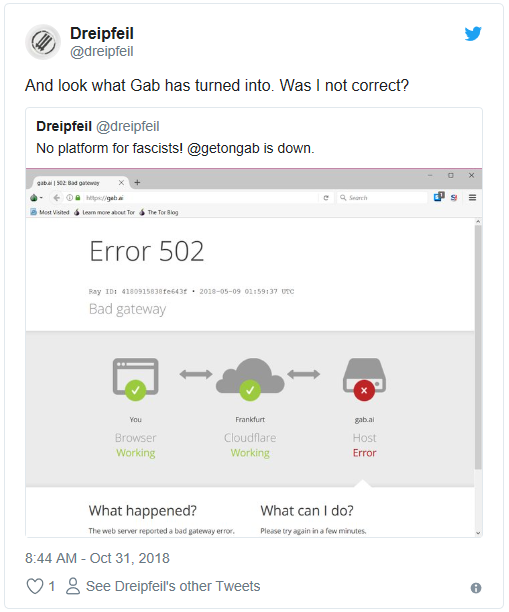 Free speech social media site Gab.com found itself under DDOS attack last week, but now endures another type of attack: having moved from large cloud providers to a smaller regional provider, it had to reorganize its server configuration, and now finds itself struggling against huge amounts of interest while trying to migrate data from the older setup.

The result has demonstrated instability in certain core areas. For example, many accounts are showing missing page errors (404s) when displayed; some other accounts have vanished, probably banned; still others are getting thrown into an error 500 loop upon logging in.

According to Gab developers, they are aware of the first problem and working on it. No list of banned accounts or infractions has been issued. An email to Gab support confirmed that the 500 loop is a known problem.

We are waiting to see if Gab’s transfer to new hosting will enable it to keep its free speech commitment without excessive crackdowns on content. During the last day, Gab has seen its post embedding disabled when its partner Embed.ly dropped support, and a new update rolled out to squash bugs.

Its new hosting service, Epik.com, issued a statement about Gab which detailed its future policy of free speech “with responsibility”:

These days there are many kinds of online content that some people find objectionable. When it comes to publishing content, online or offline, there is an interplay between free will and personal responsibility. Specific to Gab, the decision to not only tolerate but to welcome competing views, does come with a responsibility to take action when free will is exhibited without personal responsibility. This was famously illustrated in the opinion rendered by Supreme Court in Watt vs. United States (1969) where threats of violence was deemed unlawful.

This follows the event which triggered the mass deplatforming, namely that one lone fellow shot up a synagogue, killing 11 people, after posting a final message on Gab that concluded with “Screw your optics, I’m going in.” It is unclear how anyone could have figured out that this was a serious message and referred to actual violence instead of more internet drama.

Gab and Epik issued a joint statement saying that hundreds accounts and forty posts had been banned for threatening violence, doxing, or other violations.

In other news, social media continues to make waves as even the NYT discovers that Facebook was used to incite violence in Myanmar. Perhaps the Gab model — maybe with a little more transparency — works better than the black box model favored by Silicon Valley Big Tech.

Periscope (November 6, 2018) | Midterms Prove That Not Being The Other Guy Is Not Enough