Do Idiots And Geniuses Agree on the Same Things? 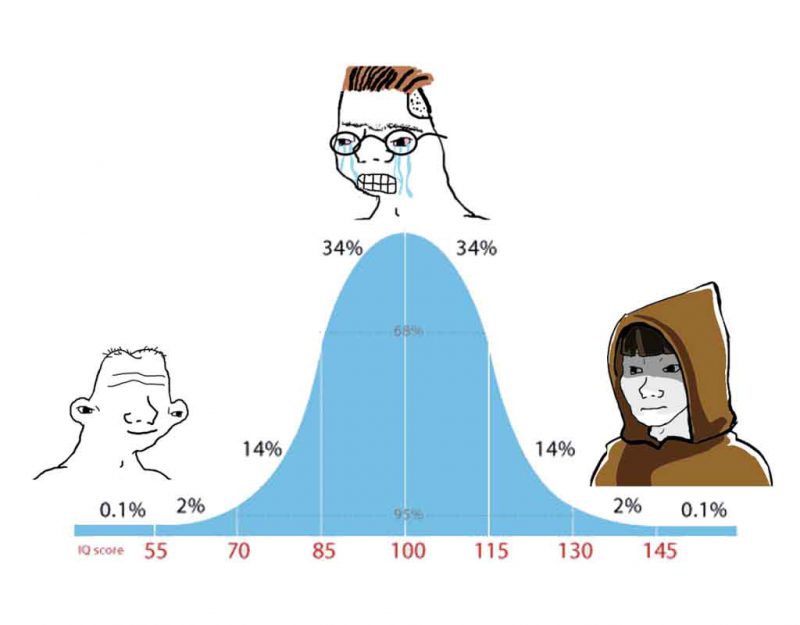 These IQ distribution charts provide an entertaining view of any issue. The irony is that the geniuses and idiots agree while the people in the middle come up with some mentally damaged, insane argument that clearly has nothing to do with reality.

In my view, people are reading this backward: the point is not that the issue makes sense only when simplified as geniuses and idiots tend to do, but that the middle of society is unstable in its role, and therefore, they are posing.

Your ancestors created caste systems for a reason. People who have a stable role, meaning a social rank which they cannot lose except for through gross incompetence, tend to speak their minds.

The people who depend on their jobs, which in turn depend on other people liking them and recommending them, have no such stability, and consequently, they are always trying to curry favor from the Herd by repeating the predominant opinion.

Look at your average influencer on the internet. They have one thing in common: they were broke. Consequently, they go out and troll for public opinion, find the consensus, and then make a really emphatic version of it.

Ever wonder why they lag about a day behind the news stories? They were gathering opinions. It is like a poll: see what most of the people believe, then act it out through drama and clever stunts.

Amazingly, they remain popular. Hint: it is the people in the middle of the Bell Curve, looking for what is popular, who tune in to influencers and niche celebrities.

People in the middle want something that is edgy but not really controversial, straight down the middle of the opinion polls without seeming so, and yet ironic and unique/different enough that they can brand it as their own opinion.

As the influencers go, so goes the middle. Idiots and geniuses do not worry about this because their position is fixed. Idiots are accustomed to no one caring what they think, and geniuses are familiar with being Cassandras in a wasteland.

And then we must ask, who promotes the memes about geniuses and idiots agreeing while the middle waffles? The rich sardonic laugh of the gods below echoes through out minds because it is the middle that likes these memes the most.

We used to have a word for knowing just enough to pose oneself into trouble, sophomore:

1680s, “student in the second year of university study,” literally “arguer,” altered from sophumer (1650s), from sophume, an archaic variant form of sophism, ultimately from Greek sophistēs “a master of one’s craft; a wise or prudent man, one clever in matters of daily life.”

People in the middle are poseurs. Those at the top have actual information and understand it, while idiots generally submit any rationalization that makes themselves look better, usually following the Dunning-Kruger Effect.

That leads both of those groups to look toward the most basic answer in any case, since very few things are actually complex, where the middle group injects complexity in order to make it seem more accomplished.