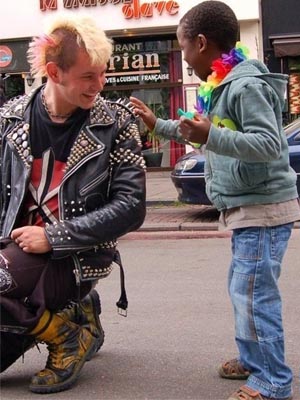 The left likes to pretend that everything is fine with race relations, and that the topic only comes up when some right-wing bigot mentions it.

Yet it’s the left who has waged race war against America for the last six decades. Starting with a post-WWII boom in racial equity legislation, the left — fresh on the heels of America’s victory over fascism — committed itself to initiatives to displace and then replace the white majority, culminating in the Immigration and Nationality Act of 1965.

Now the left has made it official: they are the party of the holier-than-thou “intellectuals,” and the non-whites.

Everyone else can go take a hike. Especially white intellectuals who don’t agree with them.

If the races were reversed, we’d call it genocide. As it is, such talk is not permitted, Comrade Citizen. That is to say, the left is very committed to making this strategy work. At this point, they’re desperate. Every leftist initiative since WWII has failed, leaving behind a trail of social problems. The left needs to seize power soon or the great anti-leftist wake-up call may occur.

As a result, they’re taking it to the mat:

For decades, Democrats have suffered continuous and increasingly severe losses among white voters. But preparations by Democratic operatives for the 2012 election make it clear for the first time that the party will explicitly abandon the white working class.

All pretense of trying to win a majority of the white working class has been effectively jettisoned in favor of cementing a center-left coalition made up, on the one hand, of voters who have gotten ahead on the basis of educational attainment â€” professors, artists, designers, editors, human resources managers, lawyers, librarians, social workers, teachers and therapists â€” and a second, substantial constituency of lower-income voters who are disproportionately African-American and Hispanic.

…In the United States, Teixeira noted, â€œthe Republican Party has become the party of the white working class,â€ while in Europe, many working-class voters who had been the core of Social Democratic parties have moved over to far right parties, especially those with anti-immigration platforms.- The New York Times

The left and their lackeys in the media want to spin this as poor whites versus the smart people. While the media is not pro-leftist per se, it panders to any group that considers themselves to be victims, as such people consume more media out of a lack of any other purpose in life. Think lonely people with drab functionary jobs and no families, alone at home eating cookie dough and watching maudlin movies.

Nevermind that (a) a college education is no longer worth much because it’s High School II, a denatured certification program that with a few exceptions emphasizes memorization over the ability to think and (b) that many of the un-educated in our country are not stupid, but opted to avoid four more years of pointless education that’s little more than propaganda and memorizing steps to be another cog in the machine.

In the meantime, what they are endorsing is genocide — the replacement of one ethnic-racial group with another. Few dare speak up about this because to speak up is to invite someone else to call you un-educated or hateful, which in turn reduces your prospects in life. But it’s genocide the same.

As the heavy-browed species ventured farther and farther to cope with climate change, they increasingly mated with our own species, giving rise to mixed-species humans, researchers suggest.

Over generations of genetic mixing, the Neanderthal genome would have dissolved, absorbed into the Homo sapiens population, which was much larger.

“If you increase the mobility of the groups in the places where they live, you end up increasing the gene flow between the two different populations, until eventually one population disappears as a clearly defined group,” said study co-author C. Michael Barton, an archaeologist at Arizona State University’s School of Human Evolution and Social Change. – National Geographic

Why is this acceptable, and why do Democrats do it? By any other means, it’s a psychotic race war declared on America’s European-descended peoples. In practical analysis, it doesn’t create anything better, other than another mixed-race state where soon we will have lots of people of a uniform grey with no particular cultural characteristics.

The left declared race war on white America because white America, on the whole, does not buy into the leftist charade. The left wants power; it doesn’t care how it gets it. It doesn’t care if it helps the people it claims to help. It wants a mindless, soulless, mechanistic revolution so it can take power from those in charge. (Not unlike the common cold, a cancer or even ringworm.)

By separating out one group of white people, telling them that they are “educated,” and pitting them against the rest of their ethnic group, the Democrats hope to achieve approval for their open-minded policy of importing people who are guaranteed not to vote Republican.

Finally, the Republicans have responded:

In the wake of the 2008 election, conservative Republican strategists like Karl Rove, Grover Norquist and William Kristol warned that their party faced even worse defeats if it continued in its anti-immigrant posturing.

Their advice was rejected. Republicans running for the House and the Senate defiantly calculated that they could win in 2010 with a surge of white voters, affirming the Republican role as the default party of white America. Initially, this approach appeared quixotic. A demographic tidal wave of African-American and Hispanic voters threatened to wash the Republicans out to sea.

But many Republican candidates â€” incumbents and challengers â€” did not budge. They not only held firm in their adamant opposition to immigration reform (despite its crucial importance to many Hispanic voters), but they also became even more hard-nosed. Former apostates on the issue, like Senator John McCain of Arizona, who had proudly backed immigration reform in 2004 and 2005, saw the light â€” in other words, read poll data on Republican voters â€” and moved to the right. – The New York Times

Both parties are coming down to the line here. If Democrats do not get power soon, they will be forced to confront the disaster created by liberalism. If Republicans do not gain control soon and change our immigration rules, they will soon be permanently demographically outvoted by the Democrats.

In the meantime, another disaster brews: the primary support for our welfare state is the white voter. They’re getting squeezed, because the ratio of non-whites to whites is increasing, according to this article, and it means possible ethnic conflict ahead.

Ethnic minorities are expected to be a majority of the U.S. population by 2042, and that big demographic change will eventually affect Social Security as well â€” if a bit further down the road. By around 2070 or so, Social Security itself will reflect the new â€œminority majorityâ€ population, predicts Maya Rockeymoore, president and CEO of Global Policy Solutions, which put together a new report on the issue with a coalition of left-leaning policy and minority advocacy groups. The report points out that minority Americans tend to rely more heavily on Social Security than white Americans, given the disparities in wealth and income. – The Washington Post

The pundits told us that it was suicidal for Republicans to not endorse the Hispanic and Black vote and aggressively pursue it. As it turns out, those pundits were wrong.

Pundits also tell us that there is no peaceful means of ethnic separation, and that if we do not support the minority vote, they may riot and murder us in our beds. As it turns out, that isn’t true either — when the subsidies go away, everyone leaves:

Unemployment rates have fallen in Alabama amid new legal pressure on companies to comply with a popular immigration reform law.

September was the first full month that the reform was in force, and the unemployment rate fell from 9.8 percent in September to 9.3 percent in October, according to a Nov. 18 report from the state government. – Daily Caller

Think about this practically: Mexican people come here to feed their families. When it’s easier to earn a living in Mexico, they stop coming and the ones that are here go away.

I have a suggestion for our response to the Democrats’ declared race war on white America: repeal all anti-discrimination legislation. Let people hire, rent to, sell to and socialize with whoever they want.

Then, replace our welfare state with a workfare program like we had in the 1930s under FDR. They’re not perfect, but they’re better than welfare, which smashes families.

Finally, let’s talk reparations for slavery — with repatriation. No ethnic group is happy without self-rule. It’s time for us to end the ongoing racial drama in which Democrats use race as a weapon, and Republicans are afraid to react, and everyone loses as a result.

Still, she argued that even though America has “gotten to a place [where] race is not the limiting factor that it once was,” she said that “we’re never going to erase race as a factor in American life.”

“It is a birth defect with which this country was born out of slavery; we’re never really going to be race blind,” she said.

She pointed to the confluence of race and poverty as a particularly troubling constraint for overcoming inequality, and wondered if that problem isn’t becoming even more exacerbated in recent years. – The Root

Rice makes a good point: race will never go away. Someone will always be the victim, and someone else the giver, and they’ll resent each other as they do now. Weren’t we promised that racial problems would go away in the 1960s, if we just passed some liberal reforms? (Note: also in the 1970s, 1980s, 1990s and 2000s.)

Even if we breed ourselves into a uniform grey color, some baby will be born that is lighter than others. Some geographic area will be seen as more privileged. And so it goes, on and on, south of Heaven.

Before the Democrats unleash another round of ethnic warfare upon America, let’s make up our mind about the peaceful and yet effective solution to this problem. End the race warfare; end multiculturalism.