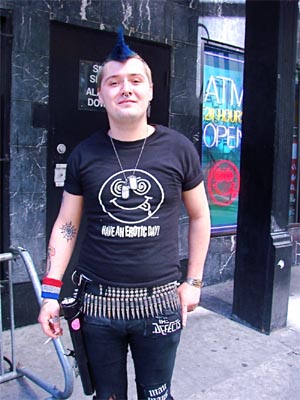 Let’s talk about the word “educated.” It’s a snotty little word, when you think about it. It’s a way we can both insist that we are all equal, and still be elitist. In the past, people were chosen for an elite based on who their parents were (which makes sense, given that most traits are heritable). Now, we have this fiction that we’ve all “proved ourselves” by becoming educated.

This nasty little sleight-of-brain lets us both pay heed to the great fiction of equality and also indulge our egos. We are not where we are because we were privileged; oh no. We got ahead because we work harder and just had a knack for that education thing.

This forgets of course that education in the United States and Europe at this point is a certification program more than anything else. It tests basic intelligence in some areas; in other areas, such as the liberal arts, it increasingly tests nothing but political allegiance and the ability to recite dogma in different forms (such “A Feminist Analysis of Cetacean Symbolism in Public Policy”).

Even in the sciences, we do not test intelligence so much as obedience, memorization and application of rote. This enables us to stop relying on smart people and to instead promote lots of interchangeable cogs. They may not be smart, but that means they’re easy to replace, and they do exactly what we tell them to. Even better, they’re very proud of having reached more-equal-than-equal cog status, and so they’ll keep the others in line.

“Educated” is a nasty word that reeks of compensatory elitism. It’s a word of the head trusty at the prison, or the JÃ¼discher Ordnungsdienst at Treblinka, or the kid who gets asked to keep order while the teacher is out of the room. It’s the same privilege-abuse that occurs at Wikipeda, by power-hungry security guards, or in kids put in charge of rooms in virtual worlds. One little group feels superior to the others on the basis of a dubious attainment.

Not all education is a dubious attainment. If you went to a school and had no special political or social category to give you external help, and dedicated yourself to learning and gained actual skills, that’s significant — especially if it’s a good school. But most colleges at this point are little more than High School II, and most degree programs little more than advanced coloring books, which in part explains why our graduates are less capable than ever before, and the market has correspondingly re-evaluated college degrees as having less value.

This media spin wants to give our citizens a sense of control, mainly because as our society decays, everyone is experiencing a loss of control. As a result, they set up a politically-correct dichotomy. The “educated,” or those who were not born into money but through “hard work” achieved it, are opposed to those lazy good-for-nothing non-college-educated ignoramuses.

But the more regimented we make our system, and the more people we force it to include despite a lack of aptitude, the less “educated” means anything but someone who has bought into the system and is now defending it with snotty elitism and destructive political opinions.