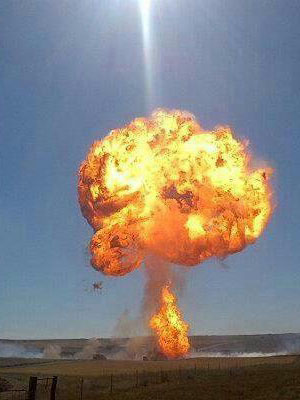 When you’re shooting at something on a battlefield, “secondary explosions” are what happens when you hit the enemy’s munitions or weapons cache. They’re essentially a confirmation that you shot or bombed the right thing.

In particular, if you’re flying over enemy territory and open fire on a building and it explodes, you know it’s a weapons cache, not the hospital, orphanage, fire station, or elder care home that the enemy propagandists claimed it was.

Similarly, in politics, the flare-up of controversy can indicate that you’ve hit something important. If people care enough to try to shut it down, it must be something that threatens them. And if they’re your opposition, that’s what you want to do.

In Western politics, there are a number of trigger-topics that show where we cannot publicly discuss important issues. These are like secondary explosions of our hypocrisy, fear, denial and apathy. When they get hit, everyone gets defensive because their cover has been blown.

It’s hard to claim, for example, that the Travyon Martin case or even the OJ case were hospitals or orphanages. No way — those were fertile weapons caches that detonated the instant someone popped a round in on them.

Other topics have similar effects. We can’t talk about abortion without dividing the nation, or the death penalty. Even topics that bring up the question of whether we like our nation, like leakers Snowden and Assange, divide us like a chemical reaction.

But race remains an enduring topic. It’s one of those questions that kids ask, like why it is that all the really good art is from 200 years ago and all the stuff now looks like one of the dumb kids — the ones who ate all the paste — did it.

It’s hard to deny our observations. First, that places with any kind of diversity (ethnic, cultural, religious or class) tend to be unstable and more alienated. Second, that history shows us no examples of diverse states that succeeded, although we know the groups were in contact.

Finally, we can look around us. Liberals talk a lot about race, then run home to condos with security guards. Conservatives can’t talk about race, because conservatives are from the majority party and thus are always going to get called racists.

Started by a former soft-porn seller, Wikipedia is a giant graffiti wall that claims it is an encyclopedia. As it turns out, only about 25,000 people make most of the edits to it, most of them graduate school drop outs smoking dope in their parents’ basements.

That wasn’t very charitable, was it? It’s closer to accurate than any other description of Wikipedia you’ll find. One of the things that makes Wikipedia exceptional is that people use it to control others by controlling the meaning of words.

Thus, as you might guess, it’s an ideological free-for-all battlefield.

Google, the world’s biggest search engine and one of its biggest companies, gives Wikipedia pages top billing. This way, you never get non-results with Google, even if you get directed to a mediocre collection of plagiarized articles reflecting heavy liberal bias.

But if we look at Wikipedia’s most controversial topics, as measured by how editors spar over them, a few delicious taboos are revealed:

What makes these topics so controversial? Think secondary explosions. When you touch any one of these, you’ll set off a bomb.

The left is composed almost entirely of socially-popular political narratives. These are little stories that explain away the failures of leftism by blaming those failures on rightism, and that justify leftism through social measurements like happiness and desire.

When you hit a page about George W. Bush, it has two choices: it can either conform to the leftist narrative, or it’s a threat to them. That doesn’t mean it has to be positive about Bush. If it’s not ragingly negative, it’s a threat to their worldview.

And for conservatives, who hate abandoning someone’s reputation to the thugs, bullies and vandals of the internet, it’s important that George W. Bush get a reasonably objective page. But that offends liberals.

Christianity’s in the same boat. We either describe it as a world religion and write a little about it, or — in classic Wikipedia style — we create an article that resembles that ideal, but slant and spin it to make Christianity look as backward and illogical as possible.

Then there’s “Race and Intelligence.” You can tell this is a doozy. The fact is that the best information in genetics suggests that not only race, but ethnicity, and social class, reflect deep divisions in intelligence. Intelligence is heritable. Not everyone is equal.

This enrages the left, whose narrative is based on the assumption that everyone is equal. If that falls, everything they have falls.

Thus they’re always cooking up studies using cherry-picked data to try to pretend the long history of studies showing intelligence is unequal and heritable are somehow wrong, knowing that the peanut gallery of useful idiots will turn up the volume and drown others out.

And when they notice that reality isn’t conforming to their data, they simply head to the internet to edit, delete, vandalize and obscure until what they see looks more like what they wish were true, even if their gut (and yours, and mind) says otherwise.

Akon: This is not your country | How to cause resentment with fairness