How to cause resentment with fairness 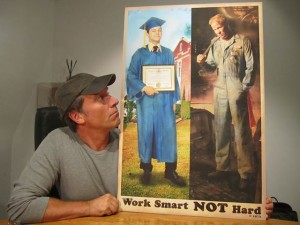 Here’s a picture of Mike Rowe with a poster that hung in his guidance counsellor’s office when he was in high school. He didn’t like it, and neither do I.

What it’s saying is that if you study hard, child, you may avoid the hell of physical labour and one day be blessed with an air-conditioned office and a cushy chair to sit on all day. Even ignoring the fact that public schooling teaches nothing useful and many things harmful unless you luck out and get a teacher for one class who actually loves knowledge and has the guts to teach it, this is still a lie. Just look at the numbers: how many doctors, lawyers, and engineers do we really need? You and all your classmates can get straight A pluses and it won’t matter, a few will get the desk, and the rest will be the AC repairmen, and so on.

We can push all our kids to shoot for the “top” jobs in a doomed egalitarian attempt to get them all to succeed, but we’ll just be setting up the bulk of them for failure. Then when they’re fixing the AC they’ll hate the system for crushing their dreams, and they guy in the desk will get high on a smug sense of superiority. After all, if the guy in the coveralls had just studied harder, he’d have his own desk. Everyone starts as a blank slate with the same potential, so he’s clearly just lazy. So much for egalitarian ideals.

There’s loads of satisfaction in physical labour. There’s pleasure in healthy sweat. There’s fullfilment in knowing you worked to the best of your ability to build a solid house, or to harvest enough food for dozens of your neighbours, or even in fixing the AC well enough the first time that there won’t be a need for some half-assed repairman to tinker with it every summer. Sitting down to a good meal at the end of a long day of honest work–not much compares to that.

Let’s ditch the idea of trying to lift up everyone simultaneously by their bootstraps into functions they can’t perform and let’s bring back the idea of roles. A civilization has many different parts and needs, so let’s figure out who’s able to do what, and fit them into a role that they can fullfill and succeed at. This will become less mysterious when we notice that people are generally a lot like their parents and have similar aptitudes.

From there, we can start to respect each other. Not the fake respect that demands we treat equally people who are clearly not equal, but the mutual respect that happens when people are where they want to and were meant to be. Pushing for social mobility out of a misguided and contradictory sense of fairness just brings resentment and failure.