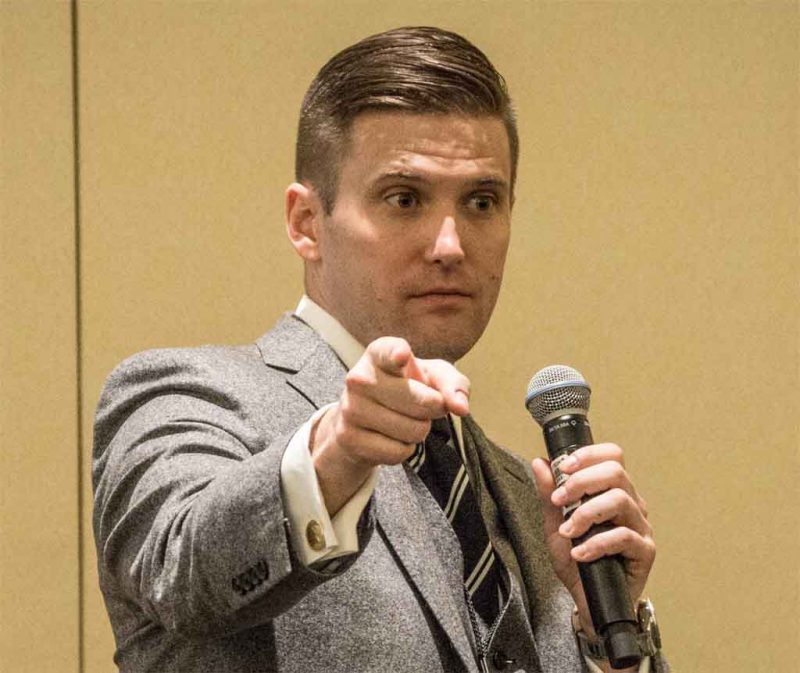 With no joy did I read that Richard Spencer will find himself in divorce court soon since his ex-wife has both filed for divorce and, as we might have guessed, the press rushed to the divorce papers to look for nasty stuff to say about the one man who has really threatened their hegemony over the past few years.

The globalist deep state consists of bureaucrats in every country, operating both independently and through informal coordination, to preserve the current system we have: a tax-and-spend circular Ponzi scheme where government takes in a lot of money, dumps it on the least capable consumers, then benefits from the demand-side economics scheme of “fast money” as people see the economic activity and buy in to participate. This system represents the perfect fusion of consumerism and socialism.

Unfortunately, it also destroys societies. For this reason, people like Spencer, who suggest not just European ethnic advocacy but the creation of a new and better society, threaten the elites in a way that Nigel Farage and Donald Trump barely begin to. He is calling for the end of a dying, parasitic order and rebirth of civilization.

For this reason, the press could not wait to get out there and start writing as many nasty things about Spencer as they could hammer out on their MacBook Pro keyboards. This guaranteed that all the dirty laundry would be aired, and not only that, made as salacious as possible.

I knew Spencer’s soon-to-be-ex-wife Nina Kouprianova back in the day when she was hanging around the extreme metal community. She struck me as pleasant, but different in that way that Eastern Europeans appear to WASPs. She was also clearly interested in having an intelligent and powerful man around her.

Her marriage to Spencer in the late 2000s heralded a massive change in her life. Suddenly she became a public figure, and wanted to distant herself from the Alt-Right. At first, she did this by moving to the small town where Spencer’s parents live, probably for child care.

The two have been living separately for several years now. Originally it seemed that this was to protect Kouprianova from the prying eyes of the press, but eventually it may have become some kind of alienation. These are private matters, not public ones.

As most of our readers know, I think highly of Spencer as well. A man with a formidable knowledge of Nietzsche as well as traditional Right-wing politics, he guided the Alt-Right away from the usual stupid stuff and toward being a type of intellectual salon where we made fun of the failings of Leftism.

By doing so, he helped further a cultural wave that has been building for some time, and brought regular people into the Alt-Right because they are interested in finding the cutting edge of human thinking. They will not find that among the Left, who are recycling the same tired ideas in new and innovative forms, but have run out of good credit.

Despite having many opportunities to cash in and be controlling, Spencer has instead shown himself to be an able public face of the dissident Right, true Right, or Alt-Right, and has delivered a number of speeches which shocked and woke up America. People are using their brains again.

He does not strike me as the kind of person that is portrayed in those divorce documents. Again, there is a shortage of facts, since none of us can peer into his marriage or private life. In his work on the Right, he seems like a self-controlled person, as those who know him can attest.

None of us get through life without mistakes, however, and I am sure someone will list those that he has made. Maybe we had our disagreements in the past, but… My goal here is not to defame Spencer or Nina Kouprianova, his soon-to-be-ex-wife. It is to blame a different group entirely: the lawyers.

Whenever we see headlines about how terrible someone is, and it turns out that the source originates in divorce papers, it makes sense to be very cautious about how much of that we believe. Kouprianova almost certainly did not write her own divorce filing, but spoke to an attorney and had them present the information.

Lawyers, as you may know, get free reign to insult, belittle, defame, and criticize the opposite party in any case. They can insinuate, re-contextualize facts to make them damaging, and cherry-pick data, because their only goal is to make a case. That case is not like a scientific theory or philosophy, which has to explain everything, but a limited expedition to find some damage for which some party is liable.

As a result, divorce lawyers throw anything they can into divorce papers and sex it up as much as possible in order to pressure the other side to give in. In Spencer’s case, this lawyer probably wanted to force him into a generous settlement in order to avoid having this information made public.

Since that did not happen, the lawyer did what lawyers do, which is to make the most devastating public case they can in the hope of prejudicing the public and forcing a judgment favorable to the lawyer. They do not care if what they say is true; they care if it generates headlines, and gets public sympathy behind their client.

For that reason, you will not find some recitation of what was said or filmed here. We will together undertake the caution of knowing that even video can show a misleading situation, since we do not see what happened before the video began, and that quotations can do the same thing. Even more, we can see how lawyers manipulate that data.

We see this sort of legalized defamation happening quite frequently, especially when high profile men go through divorces:

Oksana Grigorieva didn’t directly reveal too much in her October sit down with Howard Stern, but a judge ruled that she violated the confidentiality agreement that she signed as part of a 2011 custody agreement over their daughter Lucia, TMZ reported.

The 43-year-old Russian beauty tried to tap dance around questions about Gibson — who previously was caught on tape admitting to punching her in the face — but did slip and call their time together a “painful and dark” experience.

…The legal blow comes on the heels of news that Grigorieva filed for bankruptcy, with just $10 cash to her name, according to legal documents obtained by TMZ.

Mel could be a poster boy for some sage advice from the Alt-Right: men, marry someone of your same race, ethnicity, and caste. If you marry down, she has nowhere to go but to a lawyer to sue you and take everything, and we all know how biased the courts, press, and media are against men in divorces!

Whenever you see that information has come from divorce papers, stop your brain and wait. Wait for the true facts to come out. Wait for the lawyer to see that this will not get the settlement than he or she desires. Wait for as much of the whole story as we are going to get to emerge.

Otherwise, you get fooled by the lawyers. They are good at what they do; if twenty years of education did not do it, the world of law firms will do it to them shortly afterwards. They know how to push our buttons and play us, and coming on the heels of #MeToo and the Christine Blasey Ford testimony, they know what gets headlines.

Those lawyers are counting on these headlines to win their case for them. They would only do this if they were short on actual reasons for the divorce, other than “he’s famous in a way I don’t like” and a need for money for a struggling artist who needs academic work. Lawyers love that kind of stuff; they revel in money and tearing down the powerful.

We will find out more in the future. Then, maybe, it is time to pass judgment; or maybe not, since judging other people for their mistakes and not their whole biography shows a meanness of character. For now, recognize a media blitz and a lawyer scam when you see one, and laugh in the face of the Leftist media when they parrot this insanity.

What Amerika Can Learn From Russia | Camp of the Saints, Rod Dreher, and Our Media Thought Police