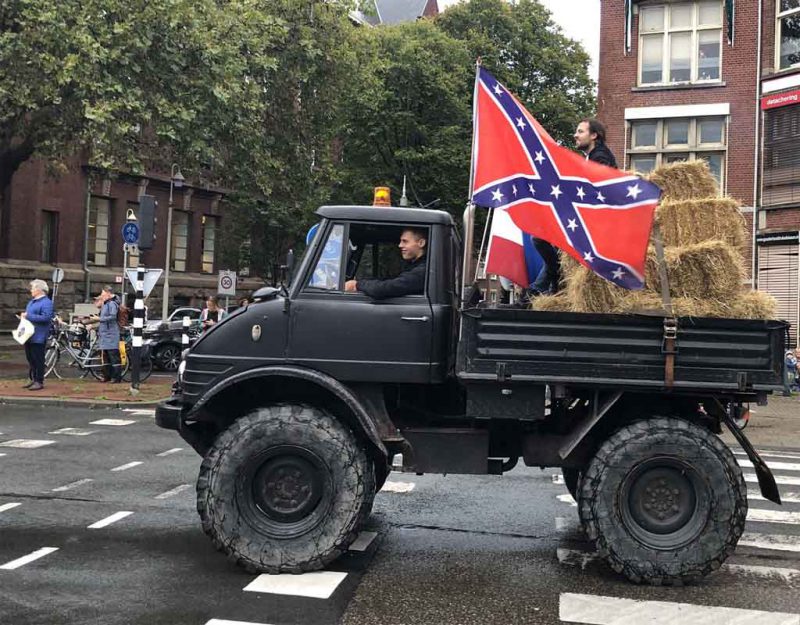 It would be nice, one of these days, for Western Civilization to win one. It dominated the world not through wealth, but through order, and the quality of its people. That enraged everyone else.

Since then, they have been attacking using the crafty and clever passive means favored by those who enjoy bullying those who rise above the mediocre norm. They seek to control, as a means of buttressing their own negativity, and so they take great delight in tearing things down.

They use control as a weapon because it fits their mental state. They have disorganized minds, so they seek to use external influences to enforce discipline upon themselves. This gives them the idea of using the external as a weapon.

When they gain power, they limit the methods that others can use in thought and action. They justify this as “safety,” when really it is a form of suicidal auto-domestication. They hope to influence minds by limiting what can be said and done.

This passive-aggressive bullying shows us the worst of human behavior, namely a need to dominate paired with a desire to seduce through language, image, and emotion. It is the weak coming after the strong for daring to inadvertently demonstrate how the weak are not strong.

Our world once considered Asia to be its pinnacle. Wealthy in trade, famous in history, this might have been the golden zone of humanity, but instead it was unstable, constantly self-destructing under an onslaught of careerism.

People in Asia used each other, much as they used tools or language, by humiliating one another and forcing them through guilt and shame to carry out what was desired. Central control arose in order to limit this constant bickering.

In the West, we formalized usage by giving every task a semi-religious role. There were reasons for everything, and the reason why triumphed over how. All existed to make an existence both beautiful and meaningful.

The rest of the world, seeing this transcendental ideal in action, recoiled. For most of humanity, materialism and egotism have been the order of the day, and when the West rose above them, it showed them how painfully thin their lives were.

Almost every act of democracy, international politics, globalism, and finance came about through a desire to subvert, undermine, refute, lure into contradiction, and destroy the West and its people.

As we are now awakening, perhaps “too little, too late” in our timing, we in the West are trying to rediscover westism: the process of living your life for intangible goals like beauty, goodness, and realism.

Will we make it? The world seems arrayed against us, and it has found many among us who want to destroy their own civilization, since their minds are disordered and they hate anyone who is naturally happy with life.

Happiness comes from within, after all, and paradoxically, it does not come from seeking happiness, but seeking order. That means understanding life in order to see how even its scary methods lead to good, organizing our minds, disciplining our selves, and attempting to do something constructive in the world.

Those who cannot do this, or fear that they cannot, have arrayed against us, both inside our society and without. As of recent political developments, the polarity has become terminal: denialists versus realists will rule our day.

As realists, we want the best outcomes in reality, regardless of what people think. Denialists want to stick to what is popular with the group, which means the lowest common denominator, even if it means our collective doom.

We have become accustomed to reading wild screeds about how Trump is a fascist:

How can anyone view the trashing of our founding tradition as evidence of patriotism? Because some have adopted a very different political philosophy than the Founders held. This approach to government promises the recovery of a mythical past. It feeds a sense of White victimhood. It emphasizes emotion over reason. It denigrates experts and expertise. It slanders outsiders and blames them for social and economic ills. It warns of global plots by Jews and shadowy elites. It accepts the lies of a leader as a deeper form of political truth. It revels in anger and dehumanization. It praises law and order while reserving the right to disobey the law and overturn the political order through violence.

To me, this paragraph reads like a pile of images that gang-rush you in order to give you the outline of a feeling, which is that lots of bad things are there. Most of these are the kind of throwaway comments you would use on a Facebook thread.

Let us break it down:

When you separate them out, you can see how context-free these statements are. They are generally nasty things you say about the other guy to suggest that he is in fact awful and no good, without getting into what he is saying.

Other than obvious untruths — Trump never blamed Jews, far from it — and complete pop psychology (“emphasizes emotion over reason”) this paragraph shows us a laundry list of what Americans always say about their enemies.

A more sensible, but still hysterical, viewpoint tells us that “Christian Nationalism” is on the rise:

In “Taking America Back for God: Christian Nationalism in the United States,” Andrew Whitehead and Samuel Perry define Christian nationalism as “a collection of myths, traditions, symbols, narratives, and value systems — that idealizes and advocates a fusion of Christianity with American civic life…It includes assumptions of nativism, white supremacy, patriarchy, and heteronormativity, along with divine sanction for authoritarian control and militarism. It is as ethnic and political as it is religious.”

While still screechy and absurd, the above at least gets into some ideas of the philosophy:

In other words, they see Trump as a hybrid between American Nativists and American Puritans. At least they realize that America is going back to its roots, even if Trump is more like a hybrid between Ronald Reagan and JFK, one that only seems “extreme” to people who have gone far to the Left since the first Clinton term.

Leftism, after all, is the language of tyrants. Altruism provides the perfect cover for seizing power: “I’m not doing this for me, but for you. I’m protecting you and giving you good things, and all I ask is your allegiance.”

That is, allegiance to the Left, and not to America, or (un-god forbid!) Western Civilization.

On the other hand, the Right speaks a language of order — in contrast to the central idea of the Left, egalitarianism or state-subsidized individualism — which demands allegiance to one’s civilization.

This leads to the type of scenario that Samuel P. Huntington wrote about in his book The Clash of Civilizations and the Remaking of World Order, which stated that ideological identities died with the Soviet Union, and civilization identity would organize us in the future:

In the post-Cold War world, the most important distinctions among peoples are not ideological, political, or economic. They are cultural. Peoples and nations are attempting to answer the most basic question humans can face: Who are we? And they are answering that question in the traditional way human beings have answered it, by reference to the things that mean most to them. People define themselves in terms of ancestry, religion, language, history, values, customs, and institutions. They identify with cultural groups: tribes, ethnic groups, religious communities, nations, and, at the broadest level, civilizations. People use politics not just to advance their interests but also to define their identity. We know who we are only when we know who we are not and often only when we know whom we are against.

In other words: nationalism — one ethnic group per nation — defined by “ancestry, religion, language, history, values, customs, and institutions” and measured by “tribes, ethnic groups, religious communities, nations, and, at the broadest level, civilizations.”

This fits the definition of “Christian Nationalism” espoused above: “Christianity” plus “nativism, white supremacy, patriarchy, and heteronormativity.” What they call “white supremacy” is simply White Nationalism, or the idea that White people should be able to have nationalism, too, since we have extended that privilege to all minority groups.

“Patriarchy and heteronormativity” is Leftspeak for traditional sexual values and mores. “Nativism” means that these Christian Nationalists are not just White Nationalists, but standing up for the historical American national heritage, meaning the WASPs (ethnic Western European Nordid-Cromagnid-Dalofaelids) who settled the place and suffered and died so that later, Irish, Jews, Italians, Greeks, Mexicans, and Negroes could show up and benefit.

The media just admitted what it does not want us to see, which is that once diversity becomes widespread enough to influence society, everyone retreats into their own little groups because they realize that all of the other groups are trying to conquer them.

Huntington correctly predicted that since the twentieth century was defined by wars for ideology, after the collapse of one ideology the others would not hold, and people would return to identity — a mosaic of religion, ethnicity, culture, race, class, and possibly philosophy or political outlook — instead of continuing down the path of ideology.

Currently we find ourselves trying to separate from ideology with populism, which is not “Christian nationalism” — a paradoxical and inverted term like “civic nationalism” — but in fact more Libertarian.

This differs from the voluntarist Christian Libertarianism that William F. Buckley preached, which essentially said that as long as the markets remained free, people could live outside of the arc of government. We realize now that this was wrong.

We might then see populism as a type of government-focused libertarian. Its goal no longer serves the individual; that method failed. It aims to denature and remove ideological government — civil rights — so that we can escape it.

The populists want the death of ideological government. They no longer want government to have the ultimate authority over us because of our civil rights agenda; civil rights are created by government, and writing them into law gives government a mandate to intervene in all affairs public and private.

Farage, Trump, and others are not Nazis, but the opposite. They want to get us out of the ideological system, in which we live to serve a symbolic reality like the quest for “equality,” and in to a realistic system, where we do more of what works and less of what does not.

Their opposition comes in the form of the neo-Communists, who learned after the fall of the USSR that their Communism needed a free market grafted onto it in order to function. All “market socialist” economies are now this way.

Those unite Leftist ideology, social climbing made necessary by social equality, and raw profit motive to create a social where people work as corporate tools, but claim their jobs make the world better, while piling up as much cash as possible.

If the “Christian Nationalists” make a point, it is that we no longer want to live in the ideological system that makes all of this possible. We trust the time-honored, organic, and moral, and distrust “Systems” in all of their varieties, since in the end, all of them whether Communist or Capitalist arrive at the same place.