A Path Through The Ruins 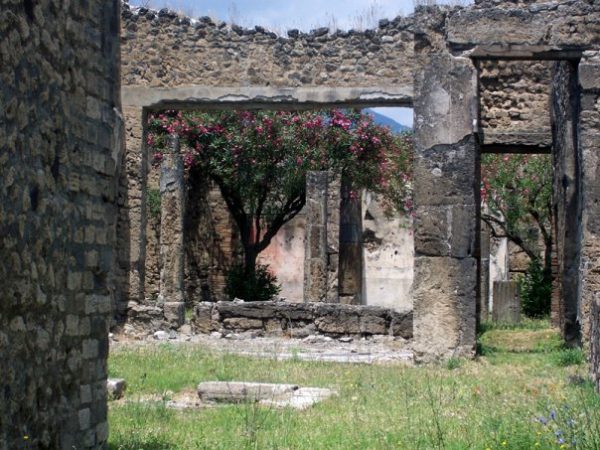 If this blog has a dominant theory, it is The enemy is us, in recognition of the fact that human groups tend toward entropy. Without intervention by the few among us who possess leadership ability, people follow individual paths that lead nowhere and generate social chaos.

In contrast, history teaches us a binary: true and not-true. Some methods of civilization work; others do not. Civilization is all; the individual without civilization has few options. Not surprisingly, most human fantasies involve being free of the burden of civilizational upkeep.

These fantasies started with the idea of equality, or that we do not need talented leaders, only rules on paper to make the average person into a responsible leader. This inept form of government then approved the next popular desire, which was that society should subsidize every person just for being human.

This leads us to the present. We have combined capitalism ingenuity with Socialist benefits to create the final state of liberal democracy: an egalitarian system in which all are safe, and all are miserable. Existential misery has risen to the level that few people are reproducing and most are miserable and destructive at the family level.

While this shows the function of government — squeezing the few productive ones to pay for the rest, thus keeping itself in power — it reveals a broader decline. Our civilization lost clear purpose about a thousand years ago when it started growing and as a result, tolerating people who could work as labor but had no other abilities.

This growth in robots of the biological type took its time to obliterate us, but managed to crowd out the few smart people by forcing them to manage and subsidize the masses. The masses then overthrew their leaders, established democracy, and our dysfunctional government now is merely acting out their fantasies.

Like all illusions, this one is coming to an end.

The situation seems hopeless. The morons have won; all is decline. As a result, most smart people aim for either self-destruction or escape. The thought of retreating somewhere away from the disaster is tempting until one considers that the decay always needs more money and enemies to keep going. Breakaway “exit” is not an option.

This means that we either gain control of the beast, or we let it destroy itself and then some of us rebuild. The problem with rebuilding is that idiots always outnumber the intelligent, and when idiots see something good next door, they will go there and ruin it too (this is the Peet Conundrum).

As with most hard problems, neither option seems particularly rewarding. Gaining control of an out-of-control democracy (but I repeat myself, as Ann Coulter says) is nearly impossible because people always vote for personal benefit at the expense of the whole. The future requires cutting benefits, and voters would rather die.

Thus I propose a hybrid plan: a society which rises up from within the ashes of the old, by destroying the old through parasitism, with a goal toward seizing the power that remains and using it to disenfranchise those who do not understand why this is necessary. In short: a replication of the liberal strategy.

Liberals conquered the West with relatively few people. They did so through a simple formula:

Comparisons to cults, street gangs and cancers are appropriate. This is the same mentality: form a dissident group and take over by working for each other, against the society at large, forcing it to accept you, at which point you can hoodwink the rest with simple promises.

If we can unite even a half-percent of the right people in our society, we can make them the force for revolutionary change. In the late 1990s, I wrote:

Among us, there are 2-5% of people in our society who are leaders in a practical sense. This means that whether they have an official title or not, they lead the community in business, spiritual, community, academic or social settings.

These are the people that your average person trusts. They trust information from these people more than from the government, their televisions, or casual friends. They respect the judgment abilities of these people.

Our goal is to inform these leaders of our values, get them to form consensus that these should be adopted, and then send them forth to implement these values in all that they do and to demand them from politicians.

This group becomes valuable when liberal democracy fails as is inevitable. Like the Soviet Union and post-Revolutionary France, Western liberal democracy is collapsing for the usual reason: it is based on rebellion, and not on having a positive and affirmative life direction.

At that time, a power vacuum will occur, much as happened after the fall of the USSR. Into this state normally come tyrants because strong power is the only force which can unify a distracted, narcissistic, oblivious and robotic population. But into that power vacuum a unified group can project itself and seize power.

The fall of liberal democracy in the West will occur because the government has created too many benefits it cannot sustain, and it will need to drop those to avoid both external and internal threats. Unable to do that, it has become dependent on the flow of money and thus corrupted by business and special interest groups.

As its options narrow, liberal democracy will be unable to avoid the financial collapse of its governments, internal unrest and the threats from outside forces — notably Russia, India, China and South American states — who will attempt to overthrow it. In bankruptcy, riots and war it will exit this world.

That brings a condition where power will be handed to those who are able to instill order so people can earn a living. Your average person makes poor decisions and will settle for those alone, figuring he’ll fix the rest later. Humans never change. This is how tyrants gain power.

If, on the other hand, the one group that was not agitating for some variety of liberal democracy steps up and proclaims a new plan, it can then gain enough support from the 60% of people in the West who are not totally lost and use that to seize power.

It goal must then be to learn from the past, and realize that there are many among us who do not fit. All Other must go gently back to their homelands, but so must all who do not fit the Western European model of tall, thin-faced, slender and intelligent people. We need a general purge through deportation to restore eugenic health.

Another essential task is to disenfranchise the 99 out of 100 people who have no capacity for leadership decisions. If they are allowed to continue voting, they will screw it up the exact same way as last time because their historical consciousness lasts for six months. They cannot be educated or instructed to make right choices.

At this point, the new regime can begin to focus on restoring genetic, moral and spiritual health. This cannot be done from outside, but by choosing those who exhibit more of these traits than others and advancing them. A process of many centuries leads us back to health.

Of late, I have grown more optimistic because the fall of liberal democracy is not only clear and imminent, but also looks to be extreme enough to give us momentum toward an entirely different system, which I formulate as:

Right now, this seems like a LARP dream list. That will change as liberal democracy crashes and its obvious fiscal irresponsibility, statecraft incompetence, and inner corruption is revealed. At that point, this entirely different system will resemble what it is, which is the true to liberal democracy’s not-true.

For now, people want a task, and this is it: help destroy the governments of your nations. Do whatever you can to make everyday life for the average person miserable and to cause government to screw up and self-destruct. Push it toward bankruptcy, warfare, and failure. Show no mercy, as it will show you none.

By nature, we are conservatives who wish to destroy nothing. But when the disease has taken over most of the tree, or at least blocked the roots from the leaves, it is time to savagely hack until it falls, and then set it ablaze so its infection does not spread. Thus shall be the end of liberal democracy and the rebirth of humanity.