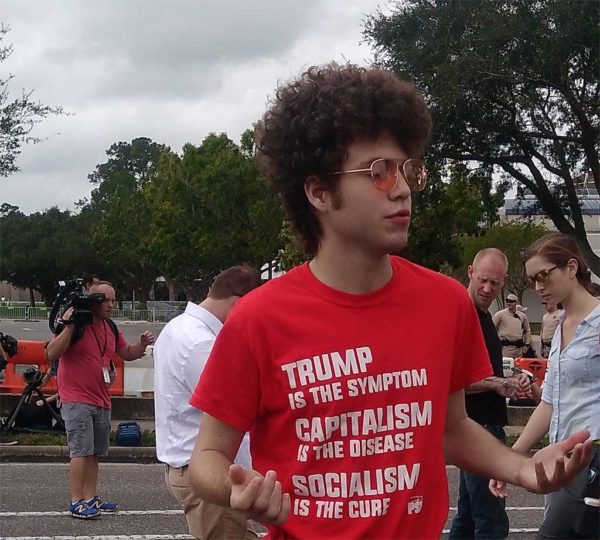 Apparently, despite abundant video evidence, our Leftist system, powered by the “deep state” of fellow travelers known as “the Cathedral,” has elected not to prosecute vandals for their politically-motivated acts which were convenient for the Left:

Charges for three people who are accused of toppling a Confederate monument in downtown Durham have been dropped, according to their defense attorney.

According to defense attorney Scott Holmes, charges were dropped against Aaron Alexander Caldwell, Myles Spigner and Taylor Cook, citing that probable cause exists, but there was not enough evidence to prove guilt beyond a reasonable doubt.

On Aug. 14, a group of protesters tore the statue of a Confederate soldier down after a white nationalist rally in Charlottesville, Va., ended with one woman dead and almost two dozen injured.

If you want confirmation that you live in a neo-Communist regime, you can find it here. Instead of being concentrated in the state, the unruly mob of revolutionaries has distributed itself among state and private industry, and now enforces its dogma with winks and handshakes instead of official paper instruments.

As many have noticed, this regime includes the captive opposition of the Republican party, who pared off anything resembling actual conservatism to go libertarian sometime in the 1960s, and by doing so, have made only token protests toward conservative values in the years since, with only a few wildcard exceptions like Reagan and Trump.

This reminds us of the wisdom of Hans-Hermann Hoppe, who argued for “physical removal” of Leftists in his book Democracy: The God That Failed (2001):

In a covenant…among proprietor and community tenants for the purpose of protecting their private property, no such thing as a right to free (unlimited) speech exists, not even to unlimited speech on oneâ€™s own tenant-property. One may say innumerable things and promote almost any idea under the sun, but naturally no one is permitted to advocate ideas contrary to the very covenant of preserving and protecting private property, such as democracy and communism. There can be no tolerance toward democrats and communists in a libertarian social order. They will have to be physically separated and removed from society.

Unlike most libertarians, he is willing to admit that Leftism is a spectrum stretching from anarchism through totalitarianism, with democracy being its mid-point. Leftists, if not physically removed, will begin agitating for Communism from this mid-point or any other point on the spectrum, and the only solution is Darwinistic style removal from the society.

If we cannot enforce basic laws against vandalism, this means the State is complicit with the vandals, and the two have an ideology in common. Until these people are driven from power and then driven from among us, there will be no sanity or future for Western Civilization.

Refuting The Latest Media Lie About Racial Purity | Revolutions May Be Tantrums In Response To Famine, Not Revolts Against Injustice