The Peripheral by William Gibson 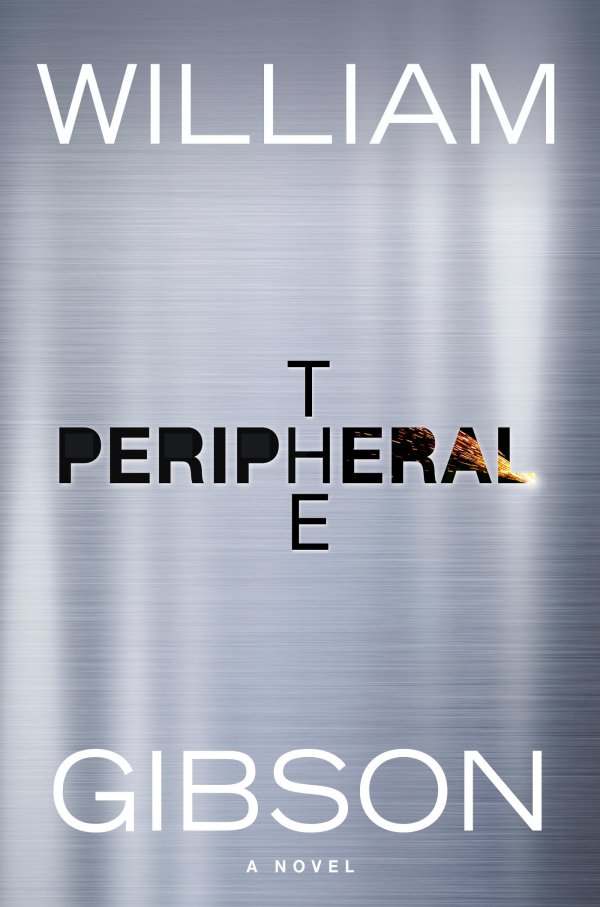 As with all postmodern books, and Gibson finds his inspiration in Thomas Pynchon as much as in sci-fi, a title can possess multiple meanings. The Peripheral shows us a book with a dual symbolism to its title: ostensibly about the use of remote-controlled biological androids, or “peripherals,” for people to live through, it takes on another meaning as well.

The term “peripheral” after all refers to something we plug into our computers to interface with the world, normally mice, modems, printers and similar devices. In this book, which seems inspired by recent events, the peripherals (perhaps inspired by the 2009 movie Surrogates) compare to drones and other forms of remote presence which are increasingly popular. But these are merely a way to get us into a more interesting concept.

Plato says history is cyclic; Hegel says it is dialectic; Nietzsche with his “eternal recurrence” makes us think what it would be like to re-live our lives time and again. Gibson synthesizes these three into a vision of continua, or branches of reality created by historical events, and the possibility of communicating between them to avoid certain things become inevitable in one of them.

The Peripheral shows Gibson as a mature writer who has adopted a synthesis between the sides of him that are focused on sci-fi and the ones that wish to be more literary, i.e. critical of our time and its assumptions. He uses theories of technology in the future to critique our use of what we have now, and our choices in how we live as a species.

Rocketing to fame with Neuromancer, Gibson famously put a face on the networking revolution with his concept of “cyberspace,” loosely borrowed from W.S. Burroughs’ “Interzone”: a space of ideas. Following the success of that book, he explored social critique in books such as Idoru, about the cult of ego, and Pattern Recognition, which looks into the mass mind tendencies of the internet. These follow a series of critically acclaimed sci-fi books which never achieved the distinction that his first did, and precede Zero History and Spook Country, which explored the same future-present fusion that The Peripheral does.

Perhaps in reaction to the overly-familiar style inherited from blogging that requires writers to use tropes and cliches familiar to their audience as a means of establishing parity with them, Gibson writes in a stripped-down, distant way. Like a coder, he uses levels of abstraction and avoids giving us detail unless immediately necessary, but he decides that by impression on characters and not author. The details of brands and gadgets make it into the text, but often only the barest hints at layout and appearance of people do. This makes the book more like a detective novel than anything else, sticking to the facts that serve to solve a question a logical analysis.

Building was black from some angles, but really a very dark bronzy brown. If it had windows, the floors she was working didn’t, or else they were shuttered. There were big flat rectangles on the face, some vertical, some horizontal, no order to them.

The fairies had gone quiet as she passed twenty, according to the display’s floor indicator. Some level of stricter protocol? She wouldn’t have minded having them back. It wasn’t that interesting up here, swatting at dragonflies. On her own time she’d have been checking out views of the city but she wasn’t being paid to enjoy the scenery. (14)

This sparse style fits with what other science fiction writers did in their later books, like Robert Heinlein or Ray Bradbury. The book makes itself about ideas and experiences and abstracts away detail. Unfortunately, it gets lost in a different kind of detail, which is a depth of texture to the plot that is mostly unnecessary. It feels hasty, as if an author compiled a big stack of ideas and encoded them, then hit PRINT on the word processor and called it a day. Where Neuromancer fit tightly around its plot, here the plot expands to fill space, and most characters serve minor roles and thus have almost zero depth to them beyond the initial description of their appearance. This suggests a kind of exhaustion, much like Zero History had, where the author works on this like editing a handbook of insurance regulations, and loses the drive to make it an immersive experience for the reader. A good hard edit on this book could drop 100 pages, a lot of detail and make the resulting story pop out at the reader through its own internal contrasts.

However, once embarked upon, this book rewards with non-stop action of the type based on revelation more than linear collision. The convoluted plot seems contorted to force itself to include all of the logical hooks necessary to make sense of some of its more outlandish aspects, and the ending is not quite believable and somewhat directionless. The point of this book is the commentary on contemporary society and politics that Gibson encodes into the middle portion of the plot, probably pages 50-400 on this volume. That part can be strikingly interesting and show us the logical extension of many of our contemporary assumptions about the future.

This leads to the double entendre of the name. While peripherals are interface objects for a computer, the term “peripheral” also applies to objects outside the focus of the action. In this book, the real message is found in the peripheral. Using the device of the continua, Gibson shows us different worlds that can result from different choices made. The future world he reveals is both good and bad, but if we get outside that focus, it also is miserable. Characters keep asking each other if they like their own worlds, and the answer in the future is that disaster was averted, but the result is miserable. As is, characters in our time affirm, our own world. With this device, Gibson reviews his own book in a word: the action is peripheral, and the periphery is where the thinking takes place.

In this, we can see much of Gibson’s own lineage as a writer:

I had stumbled, in my ceaseless quest for more and/or better science fiction, on a writer name Burroughs — not Edgar Rice but William S., and with him had come his colleagues Kerouac and Ginsberg. I had read this stuff, or tried to, with no idea at all of what it might mean, and felt compelled – compelled to what, I didn’t know. The effect, over the next few years, was to make me, at least in terms of my Virginia home, Patient Zero of what would later be called the counterculture.

In Naked Lunch, much as in On the Road, the journey itself was nonsense but served as an excuse to introduce concepts. An increasingly technological world merges philosophy, technology and literature. Gibson attempted this in Neuromancer with his fusion of Zen mysticism and hacker lore, but never got this in-depth with it. Many of us continue reading his books not so much for the stories, which end up being a big idea and a string of dialogue within it strung together on a thin plot made intricate and tapering to dissipation, but for this commentary. He is like all good writers looking for a future direction and warning of trail hazards both behind and ahead, trying to find a path within the path that does not lead to apocalypse.