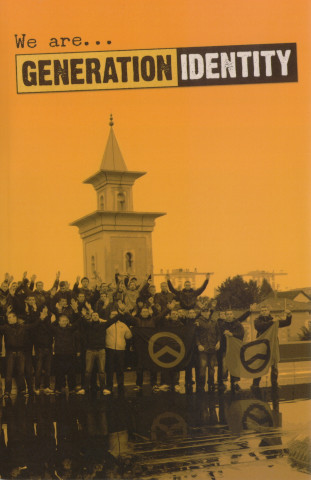 Generation Identity leapt into the public mind when they occupied the top floor of a mosque in Poitiers and took a number of pictures of normal, healthy and unafraid people who clearly believed they were doing what was right. There was not anger or other denial or compensation behavior, only a clear-eyed attempt to do what needed to be done.

Since reading Generation Identity: A Declaration of War against the â€™68ers by Markus Willinger, I have wanted to read more from this interesting movement. They are above all else practical and base their ideas not on restoring the past, but on having a future worth experiencing for those who are currently young. The future and the past dovetail of course because what worked in the past will work in the future and vice-versa, since the really big questions of human life are timeless and independent of technology, but the focus on building a future instead of looking backward to something for inspiration frees the Generation Identity movement from the encumbrances that have bogged other movements in futility.

We are… Generation Identity is an odd collection of documents that maintains the breathless, flyer tossed your way in the street feel that all of their writing has. Whether they agonize over its editing or not, it has the sense of being dashed off in the heat of battle. This book includes articles, letters, propaganda leaflets, interviews and other interactions between Generation Identity and the world in which they state the reasoning behind their viewpoints. Since this group took most of us by surprise and emerged fully organized and with a full complement of members, it’s interesting to see the coalescing of ideas that precede its origin. Equally interesting is seeing the articulation of a newer type of political movement:

As an identitarian, daily life in the Maghred, the Near East or New Guinea is not my problem; they are free to live according to their traditions (and unfortunately, multiculturalism, combined with an overall process of homogeneity, tends to erase cultural particularity). We are young people ‘living amid the world,’ to borrow a religious expression, who have chosen the love of our people and of our neighbors as our vocation. We are secondary school and university students and young working people integrated in this society by force of circumstance. We wish to live together, of course — but without them. (17)

The sentiment is rarely expressed this bluntly, but here it is: without identity, society is pure obligation and control. With identity, the outsiders cannot exist among us. And in the present time, where we cannot face this truth, our society tears itself apart with contortions of moral reasoning and euphemism. Generation Identity commendably avoids trying to play this game and speaks plainly instead about quality of life.

Underneath the skin you will find many of the same ideas shared in the nexus between New Right, archeofuturist, traditionalist, paleoconservative and far-right movements. They desire nationalism and reject internationalism and participation in any empire or at least, any empire but Europe (a term which sometimes includes Eurasia). The point is for a triple identity: first as European, then with conventional nation-states, and then with locality. Thus someone might be European, French and a Parisian at the same time and see all three as integral to his or her identity.

Today again Europe must unite itself in a common act of political construction that respects local identities. Against the Europe of merchants and bankers, against the integration of Turkey in the European Union, let us realise a powerful Europe which can stand up to any and all imperialisms. In friendship with our Slavic brethren and Russia, we must clearly affirm: neither Alla, nor the USA — Europa Nostra! (38)

This reads like something straight out of Guillaume Faye’s Archeofuturism, where Europe is united in a long federal entity from Siberia to Ireland and yet is somehow based on local entities. This faces a challenge from the nature of modern politics, which is that those who do not form federal identities that can field impressive fighting forces soon end up being captives of the Mongols. However, what is important about Generation Identity is that they are not here to solve every problem but one: how to unite people toward a vision in which they can see themselves participating.

Thus the power of this small book is that it isn’t complete. It’s a work in progress that calls for participation, if only someone to shuffle the pages and see how they look from different directions. It’s a call to action for a future which is a thinly disguise now and forevermore, a scream for a solution to the modern problems which have wracked the West and turned it against itself for decades. They don’t need to have all the answers. In fact, it is better if they do not. This is the first step of a new type of journey, and the beauty of it is that its incompleteness draws us in and compels us to push feet forward to the next step.

Deforestation | Why are liberals “anti-racist”?