The Problem of Democracy by Alain de Benoist

The problem of democracy
by Alain de Benoist
103 pages, Arktos, $27. 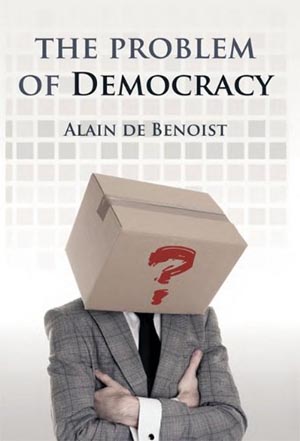 In an acrimonious and unstable political season it is refreshing to find a book as level-headed as The Problem of Democracy. This short, dense tome bucks the modern trend of taking a “strong thesis” and arguing it like a machine that makes cocktail-party conversation littered with high culture trinkets.

Instead, de Benoist takes an academic approach — analysis, historical context, and structured argument — and applies it within a conversation that more resembles engineers discussing the workings of a machine than the airy gesticulations of half-drunken hipsters. As a result, this book is universally accessible provided that the reader is able to apply critical thinking skills to follow a complex argument.

de Benoist approaches democracy without cynicism and in effect suggests we understand it before we adopt it or critique it; in developing our understanding, he dissects and re-assembles our notion of democracy, making his thesis as much about what democracy is not as what it is.

However, in recognizing what it is, he walks us through the possibilities in order to suggest but not heavy-handedly repeat a radical thesis: democracy functions only when paired with an organic cultural concept like nationalism. In this, he distills the essence of New Right thinking, which is a distrust of bureaucratic society and free markets and a preference for natural leadership and natural law, or adaptivity to our environment.

The ‘people’s state,’ which is the genuine democratic state, should therefore not be confused with the liberal state. Democracy is first and foremost a ‘-cracy,’ i.e. a form of power; as such, it implies authority. Liberalism is a doctrine concerned with the limitation of power and based on suspicion of authority. Democracy is a form of government and political action; liberalism, an ideology for the restriction of all government, which devalues politics in such a way as to make it dependent upon economics. Democracy is based on popular sovereignty; liberalism, on the rights of the individual. (45)

This conclusion emerges after many citations and inspections of democracy as an ancient concept that persists in the modern time, but which has been twisted by our modern notions such that it hovers between a “liberal democracy” (in Fukuyama’s terms) which is a quasi-anarchistic liberal state with a veneer of democracy, and a true democratic state, which is a participatory authoritarian state in which power is delegated on behalf of the nation as a whole through the people to its leaders.

In de Benoist’s analysis, individualist states are doomed to failure because at any moment any individual can sabotage the political process by objecting to any part of the law as personally inconvenient. In contrast to individualist states, holistic states act on behalf of the nation as a people and concept, and so are willing to endure personal inconvenience and sacrifice so the larger concept of nation survives.

By adopting a ‘holistic’ approach, Rousseau does not hesitate to define the people as a veritable collective organism. Speaking of the social contract, he writes, ‘This act of association creates a moral and collective body made up of as many members as the assembly has voices, and which receives from this act its unity, its common self, its life and its will.’ This idea is reminiscent of the Roman allegory for the limbs and the stomach. Against the ‘universalist’ optimism of his day, Rousseau has the merit of having posited that each nation is driven by its own particular general will. (55)

His point is to show that in individualist states, the sheer number of different directions guarantees no direction will be taken, and thus that government becomes a raw numbers game in which the lowest common denominator thrives. “The crucial idea behind democracy is not that it is the majority which decides, but rather that it is the appointment of leaders by those government, which constitutes the true foundation of legitimacy. In other words, it is the people who are sovereign, not numbers.” (52)

That concept dovetails with another de Benoist concern which radiates through the new right, which is of the managerial and bureaucratic state operating in a perpetual default behavior. When we rid ourselves of culture, and then of unpopular ideas, we cannot pick a direction, so keep going in a straight line, which hands power over to the technicians, the marketers, the writers of government pamphlets and industry “experts.”

As de Benoist explains it, the conflict between majority and minority groups in a democracy leads it to view representation itself as a type of participation, and thus to drift toward not just pluralism of opinion, but pluralism of entrenched interest groups.

We should not confuse pluralism of values, which is a sign of the break-up of society (since, while values only have meaning in respect to other values, they cannot all have equal footing), with the pluralism of opinions, which is a natural consequence of human diversity.” (71)

This thesis is bold and intriguing because it goes where few dare go, which is to apply critical thinking to deconstruct our notion of democracy itself. Too often, like other modern terms such as freedom, diversity and justice, the term “democracy” is bandied about like a brand name, without ever being defined or questions. de Benoist very sensibly does not question it, but demands it be clarified, and in doing so shows how classical democracy and modern liberal democracy are going in separate directions.

Writing in clear and simple language in an extraordinarily fluid translations, he extensively cites other sources and thinkers, pulling from each a few sentences distilling their thought on the topic, thus giving us a broad view of historical thought on the matter in a similar method to the one used by Aldous Huxley in his philosophical writings.

de Benoist guides us through this maze of seemingly conflicting ideas and knits them into a singular narrative that is not so much judgmental as it is a process of elimination, removing incompatible notions and stitching together what is left.

In this context, one should not underestimate the importance of the genuine phenomenon of national and folk consciousness, by means of which the collective representations of a desirable socio-political order are linked to a shared vision, comprised of a feeling of belonging that presents each person with imperatives transcending particular rivalries and tensions. (41)

Although this book will be good reading for those who oppose democracy, it is most relevant to those who defend democracy. In it unfolds a playbook for the pitfalls and triumphs of democracy in a form that shows what can and cannot coexist with democracy without over time dissolving it through the compromise of contradictory beliefs.

The Problem of Democracy culminates in a post-face that summarizes the major points made in its previous hundred pages, giving us ten radical theses that guide the adoption of democracy and our contemplation of how to modify it to fit a more ideal government. de Benoist’s outstanding contribution is his notion that the organic state must guide democracy, or it will fall into a bureaucracy of narrow-sighted “experts,” and by writing this as clearly as he does he provides a groundwork for any understanding of democracy in the modern age.

You can find this book on Amazon for $29.