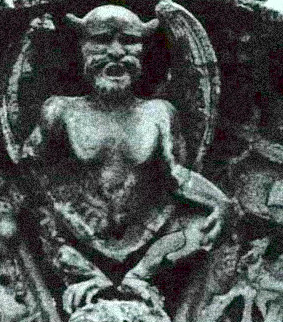 Iâ€™m not disputing this truism. But I would like to point out the possibility that elected representatives may also find themselves, to use the archaic idiom, on the horns of a dilemma. Fortunately, in our truth-jihadist toolkit, we will find an instrument called devil’s advocacy.

Now, this tool is not the inverse of the unfortunate hipster contrarianism about leadership decisions found over at the otherwise honest loyalty-to-manhood blog. In other words, this isn’t about picking a side in a fight after rendering our values judgement, or worse, on the basis of blind ideological loyalty derived from the symbol bearers we best associate with.

Instead, we attempt to set aside our obscuring biases and emotional reactions in order to clear our view of leadership decisions to find a more likely truth at work. Leadership may also face an evil or a lesser evil decision.

To begin, let’s first examine a higher up from history, Philip IV of France.

As with many Christian sovereigns of the age, Philip and his subjects were paying duties for services rendered by the order of knights Templar. The knights had started out a couple of centuries earlier protecting Christian pilgrims between crusades to the Holy Land. In a real sense, this was a public service delivered to the people.

As early as 1156 the clergy of the Holy Land tried to restrain the exorbitant privileges of the military orders, but in Rome every objection was set aside, the result being a growing antipathy on the part of the secular clergy against these orders. The temporal benefits which the order received from all the sovereigns of Europe were no less important. The Templars had commanderies in every state. In France they formed no less than eleven bailiwicks, subdivided into more than forty-two commanderies; in Palestine it was for the most part with sword in hand that the Templars extended their possessions at the expense of the Mohammedans.

It is almost as if the military orders, providing a public service, were also manipulated into driving a wedge between the local authority of nation kings and their subjects on behalf of the distant central authority of the Holy See. One of the methods was to afford the Templars privileges and entitlements far out of proportion with what they had begun with as impoverished soldiers.

Eventually, as time passed, the wedge continued to push more deeply and the dividing effect broadened. The entitlements grew into a massive financial burden for the sovereign monarchs and their subjects. It was Philip IV who took action.

“The reign of Philip IV,” writes Renan, “is the reign which contributed most to form the France of the five succeeding centuries, with its good and bad qualities. The milites regis, those ennobled plebeians, became the agents of all important political business; the princes of the royal blood alone remained superior to or on an equality with them; the real nobility, which elsewhere established the parliamentary governments, was excluded from participating in the public policy.”

Philip had the costly Templars, empowered by the Holy See – a sort of central government, falsely accused of various sins and heresies in order to destroy them, and in turn realize his true goal to eliminate the unsustainable financial burden they had placed on his kingdom and its people.

While we may absolve the Templars of these accusations, it remains true they willingly went along with the bloated system of entitlements granted to them from a distant central agency.

Philip faced the choice of playing the sucker by continuing to pay an unlimited amount for protections services provided by the military order, possibly enough to cripple the throne and France itself. He saw this as a greater evil.

Instead, he created a lesser evil, making himself a certain villain to history, but saving France’s autonomy from the whims and manipulations of distant authority for the long run.

Moving on to the present, we see something remarkably similar taking place. State leaders come into power, inheriting an unsustainable fiscal monstrosity created by the entitlement-minded. While the recipients, the public service people, are filling a needed role, the real question addressed relates to the value of such service.

One side feels the service is of infinite value. There is no limit to how much its public services, in the form of rewards for performing this duty, should cost. The public service providers obviously feel they are above adjusting their own level of affluence downward along with the rest of society as a whole as need requires.

Effectively, they revolt against the reality of enduring global recession, not against an elected leader who is only a symbol of this physical balance against unchecked growth.

One one side are the unions. The unions believe that it is the job of the government to confiscate and redistribute wealth to their members, regardless of the consequence to society at large. Sure, they hide their beliefs well, dressing it up in “it’s for the children” and “we’re champions of the working man” rhetoric. But in the end, that’s were unions stand. Pay up, shut up and damn the consequences.

On the other side are those who believe government employees are necessary, and should be compensated fairly. They further believe that as recipients of taxpayer monies, the unions have obligations as well. Primary among these obligations is not to bankrupt the state. The failure to meet this basic obligation is part of what contributed to Governor Walker’s election in Wisconsin.

The conservative opposition believes the value of public service is high, but not unlimited, and should it grow as a cancer beyond its own worth in returns, it must be trimmed back for the good of the whole society, especially in the face of what for millions of Americans is already an economic depression.

Some of them may also understand the results of these services are unimpressive and not worth anywhere close to the advertised value. We could look at the system of education in particular as a car lot with 1,000 automobiles on it. Each automobile has the ‘fundamental right’ to the cost of full tank of gas, overhead shelter, and scheduled maintenance. Yet it is only some tiny fraction of these cars that are ever even driven off the lot each year.

In more plain terms, everyone is treated to a program of reading, writing, and arithmetic. Compared to past civilizations, virtually everyone in ours is literate. Yet, what is literacy without a demonstrable correlating level of comprehension? A thousand cars sit on the lot, ready to be driven, but only about fifty drivers climb in to one car each and drive these off the lot, leaving 95% behind to waste.

With the Democrats, the privileges and entitlements system is a method of buying political loyalty. Vote Democrat and they lavish you with rewards financed by many who vote Republican, or perhaps by people who have given up on the political process entirely and go unrepresented.

For Wisconsin in particular with its public sector unions, taxpayers as a whole are indirectly financing Democrat party power against their wishes.

Accused by Senate Democrats of rushing a vote on his repair bill, Walker fired back with his own charge. He said that two years earlier, many of those senators had rammed through a billion-dollar tax hike contained in a Democratic repair bill — in 24 hours and without public input. The record is clear.

Like Governor Scott requiring public employees to shoulder a small fraction of the expanding financial burden we will all continue to face, Governor Walker is trying to reign in the system of runaway entitlement corruption. Our mass media has turned them into villains attacking the working class, but as with all things mass media, this is at best a partial truth but more likely, at worst, predictable crowd-pleasing leftist discourse poisoning.