The Intelligence Paradox: Why the Intelligent Choice Isn’t Always the Smart One by Satoshi Kanazawa

The Intelligence Paradox: Why the Intelligent Choice Isn’t Always the Smart One
by Satoshi Kanazawa
272 pages, Wiley, $17 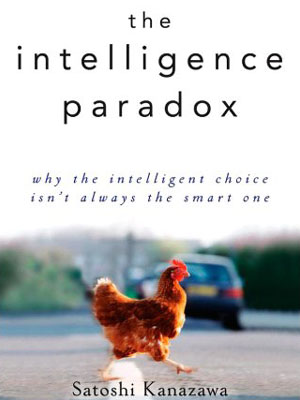 Many of you may be familiar with Satoshi Kanazawa from his column The Scientific Fundamentalist, which attempted to use the prestige of a mainstream science magazine to explore the parts of science that aren’t cuddly and polite conversation.

Over the course of several years, Kanazawa’s topics on the blog poked into every dangerous corner where science collided with the sorts of pleasant notions of “truth” that we tell ourselves in modern society to reinforce the notion that our society is making some kind of progress. In other words, the blog was a sacrificial altar to sacred cows.

Then one fateful day, Kanazawa went too far for his hosts with an article called “Why Are Black Women Rated Less Physically Attractive Than Other Women, But Black Men Are Rated Better Looking Than Other Men?”. While this post was, like others posted before it, an analysis of statistics from dating sites and surveys and the often startling results they produce, the outcry was immediate. He had attacked a sacred cow the crowd could not resist white knighting for.

Since then, he has regrouped by writing The Intelligence Paradox: Why the Intelligent Choice Isn’t Always the Smart One, which will be published by Wiley. He describes it as a continuation of his work:

The book is a summary of my current academic work for the general audience, and focuses on the effect of general intelligence on individual preferences and values. It visits many of the same topics that I have covered in The Scientific Fundamentalist blog, and includes contributions from some of you as readers of and commentators on my blog. If you liked my Psychology Today blog, I’m sure you will also find the book of interest to you.

It will be interesting to see whether he resumes the blog. Perhaps the answer depends in part on the reception that The Intelligence Paradox: Why the Intelligent Choice Isn’t Always the Smart One finds, so if you’re looking for summer reading, this should be a good and ethical choice. You’re not only supporting a book on scientifically fearless topics, but also, keeping a word in that thought should not be enslaved to the dogma of the crowd.

As Kanazawa said in an email to his supporters, “I had always known that political persecution was the price one must pay for telling uncomfortable truths, but this time it nearly cost me my job. I want to thank you all for standing by me and voicing support when it seemed the whole world was against me.” By job, we assume he means his position in the Department of Management of the London School of Economics and Political Science.

Luckily this dovetails with the topic of his book, which like some of Rupert Sheldrake’s work before it, suggests that a Goedelian split exists between “human rationality” and what is rational on the scale and level of the universe itself. Perhaps our logical brains have led us astray after all. We’ll have to read on to find out.

Why don’t we give it away? | Hunting Innocent People to Build a Narrative